Military commander in Idlib and others living nearby describe eight helicopters swooping in at low altitude, multiple explosions and three-hour battle 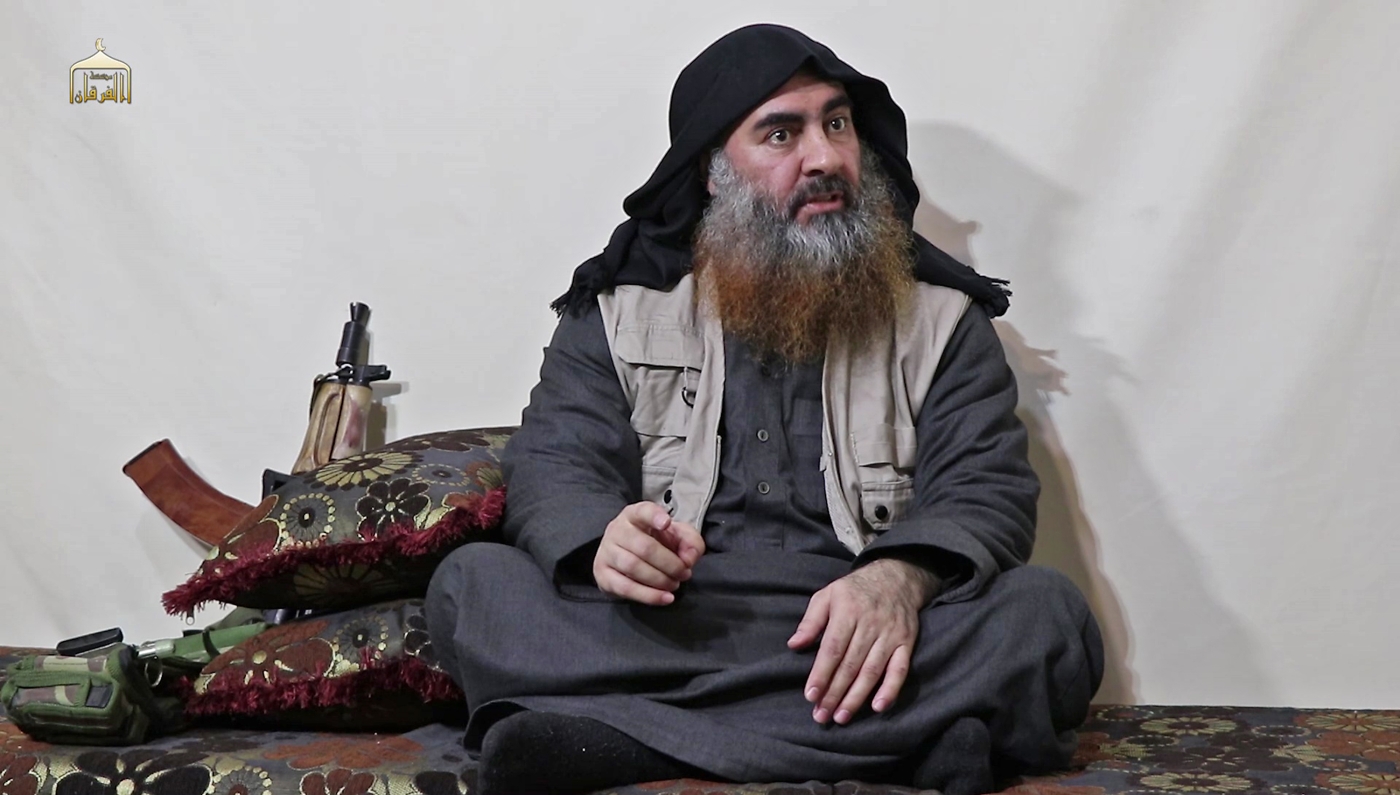 In September, Abu Bakr al-Baghdadi reportedly called on IS members to free detainees and women held in Syria (AFP)
By
Harun al-Aswad
in
Syria-Turkey border

Abu Bakr al-Baghdadi, fugitive leader of the Islamic State (IS) group, was killed in a raid by US forces in Syria's northwestern Idlib province, US President Donald Trump announced on Sunday.

Speaking to reporters in Washington, Trump said Baghdadi killed himself and three children by detonating an explosive belt after being pursued by military dogs into a tunnel as American special forces raided his compound in the village of Barisha, near the Turkish border. 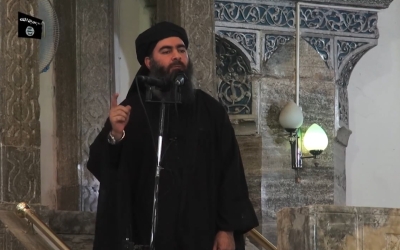 "He died after running into a dead-end tunnel, whimpering, crying and screaming all the way… As our dogs chased him down, he ignited his [suicide] vest, killing himself and three children,” Trump added.

"His body was mutilated by the blast, the tunnel had caved in on him, but tests results gave complete identification – it was him."

According to information obtained at the scene by Middle East Eye, eight helicopters had crossed into Syria’s Idlib province late Saturday night, heading towards the village of Barisha, which is less than five kilometres from the border with Turkey.

Most military and civilians in Idlib thought the aircraft were Turkish, as they flew at a low altitude towards Turkish observation points in the area.

The Syrian Observatory for Human Rights activist group reported earlier on Sunday that a squadron of eight helicopters accompanied by a warplane belonging to the international coalition had attacked positions of Hurras al-Deen, an al-Qaeda-affiliated group, in Idlib where IS operatives were also believed to be hiding.

The Observatory said that nine people had died in the attack.

A moderate opposition military commander who declined to give his name for security reasons told MEE that the battle ensued when anti-aircraft machine guns targeted the helicopters that landed coalition forces.

"The area was then shaken by a violent air strike believed to have taken out the anti-aircraft guns," the commander told MEE. "The battle lasted about three hours."

"This was a very delicate and large operation. There are coalition agents in Idlib and some of the soldiers who helped carry out the operation are Arabs, including Jordanians and Iraqis," he said.

Mohammed Gokhdar, a displaced activist living in Sarmada, a few kilometres from the scene of the attack, said the clashes began at about midnight.

Using a pseudonym, Gokhdar told MEE: "I heard violent explosions during the clashes, including the blasts of the group leaders' explosive belts."

Imad Abu Ayman, an activist living near the scene, told MEE: “There were two people involved in smuggling, believed to be civilians, who were killed in the operation.”

The mountainous region is known for smuggling and is porous enough for various armed groups to operate in.

Since the beginning of this year, Idlib has been mostly under the control of Hayat Tahrir al-Sham (HTS), an alliance of Islamist militant groups that includes fighters formerly aligned with al-Qaeda affiliates in opposition-held northern Syria, although other rebel and militant groups still maintain a presence in the province.

Barisha is reported to be part of territory under the control of HTS. A resident of a nearby village said it had a population of about 3,000 people years ago, but an additional 1,000 displaced people from other parts of Syria had moved there because of its proximity to the Turkish border and its relative safety, according to reports.

The house targeted by the operation was located on the outskirts of the village, which is far from the regions where US forces had been deployed and were used to operating.

Iraq said in a statement on Sunday that its National Intelligence Service, through "constant monitoring and the formation of a specialised task force over an entire year", pinpointed Baghdadi's location and provided it to the United States, which carried out the raid.

Trump told reporters that "11 children were removed out of the house and are uninjured", while the remaining IS supporters with Baghdadi either surrendered or were killed. 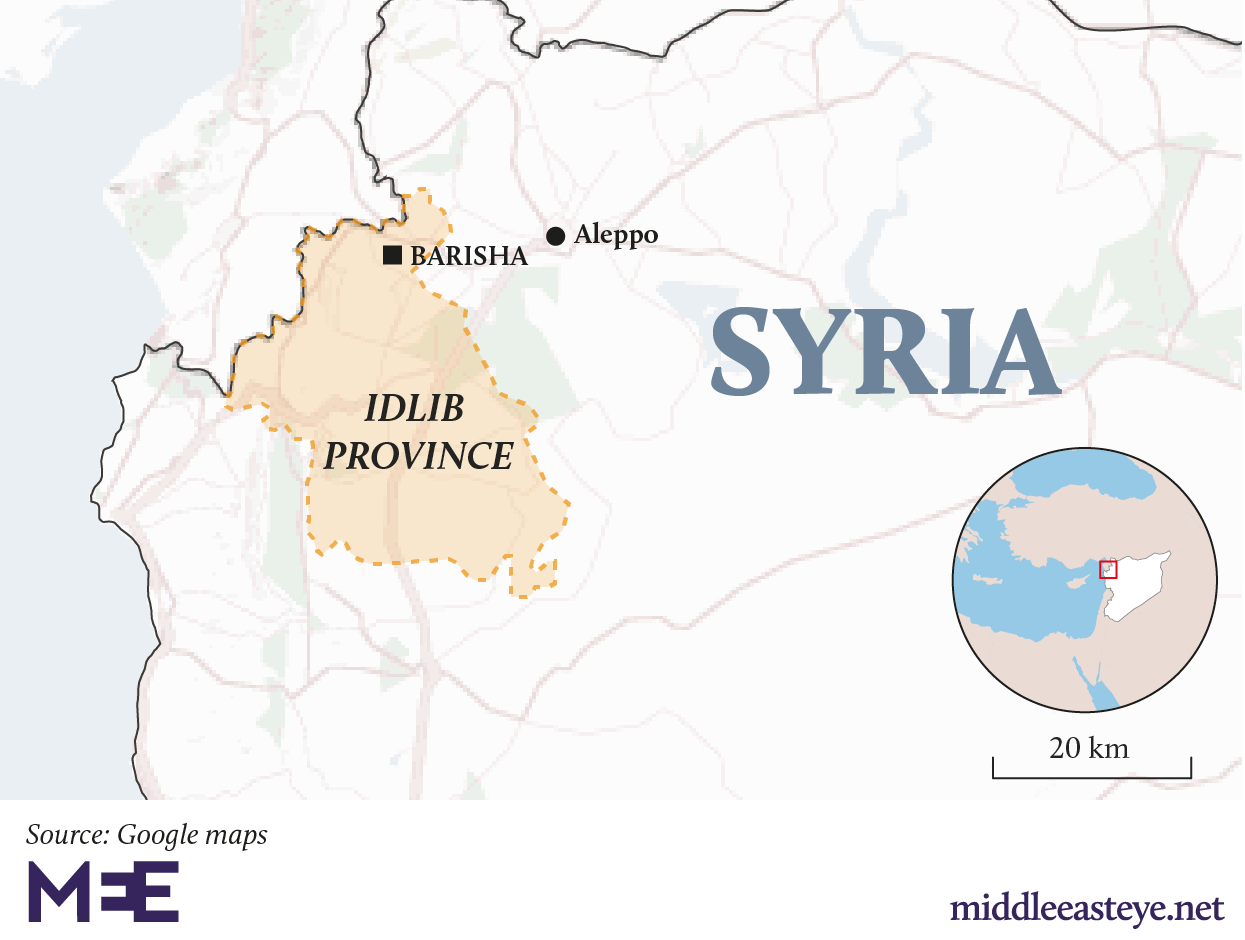 The US soldiers proceeded to search the compound, taking "highly sensitive material" including information on IS's origins and its future plans, Reuters reported.

Baghdadi, who led IS for the last five years and the Islamic State in Iraq for four years before that, had been thought to be hiding somewhere along the Iraq-Syria border.

He remained among the few IS commanders still at large despite multiple claims in recent years of his death.

Last month, IS issued a 30-minute audio message purporting to come from Baghdadi, in which he said operations were taking place daily and calling on supporters to free women jailed in camps in Syria and Iraq over their alleged links to his group.

In the message, Baghdadi also said the US and its proxies had been defeated in Iraq and Afghanistan, and that the US had been "dragged" into Mali and Niger. The strike against Baghdadi comes amid concerns that a recent US pullback from northeastern Syria may infuse new strength into the group, which had lost the vast stretches of territory it once controlled.

At its peak, IS controlled territory the size of the UK, and about 10 million people lived under the group's control.

The Trump administration has faced withering criticism from Republicans and Democrats alike for his troop withdrawal from northeastern Syria, which paved the way for Turkey to attack the US's Kurdish allies.

Turkey's defence ministry said that Turkish and US military authorities exchanged and coordinated information ahead of the attack.

"Prior to the US operation in Idlib province of Syria last night, information exchange and coordination between the military authorities of both countries took place," the ministry said on Twitter.

Meanwhile, in an apparent reference to the reports surrounding Baghdadi's death, Mazloum Abdi, the commander of the Kurdish-led Syrian Democratic Forces militia, said a "successful operation" resulted from joint intelligence work with the US.

"An historic, successful operation as a result of joint intelligence work with the United States of America," Abidi said on Twitter.

US Secretary of Defence Mark Esper said in a statement on Sunday: "Last night, US joint special operations forces and interagency partners flawlessly executed an... operation to capture or kill Abu Bakr al-Baghdadi.

"As a result, al-Baghdadi, who led the Islamic State of Iraq and Syria terrorist movement and inspired one of the most brutal and misguided terror campaigns in modern history, is dead at the hands of the United States military."

Despite losing its last significant territory, IS is believed to have sleeper cells around the world and some fighters operating from the shadows in Syria’s desert and Iraq's cities.

"The most likely outcome is that the death of Baghdadi leads to a moment of silence and a pause in terror attacks," Hisham al-Hashimi, a Baghdad-based specialist on extremist movements, told AFP.

Ismail al-Dabaaan, a civilian living in the town of Atma, near the scene of the operation, told MEE: “We are completely lost in this country. Every day new planes fly over Idlib, or we hear about a military operation launched by special forces belonging to the army of a major power.”

AFP and Reuters also contributed to this report 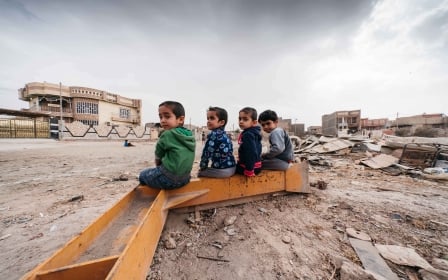