Syrian Kurdish fighters in north-eastern Syrian have halted an attack by Islamic State militants on a Kurdish city close to the border with Turkey, a spokesman said on Monday, as Turkey reopened its border to allow refugees fleeing the group in.

"Clashes are still underway but the ISIS (Islamic State) advance to the east of Kobane has been halted since last night," Redur Xelil, spokesman for the main Kurdish armed group, the YPG, told a Reuters reporter.

The spokesman described the eastern front as the scene of the fiercest fighting in the offensive launched by Islamic State (IS) last Tuesday on Kobane, also known as Ayn al-Arab.

Kurdish politicians in Turkey are calling on young people in the country's mainly Kurdish southeast to head to Kobane to help push back IS.

The PKK Kurdish rebel group on Monday called for "mobilisation," saying, "the day of glory and honour has arrived," the pro-Kurdish agency Firat reported. The PKK said: "Supporting this heroic resistance is not just a debt of honour of the Kurds but all Middle East people.

Kobane, the third biggest Kurdish population centre in Syria, was captured in 2012 from the Syrian government by the KPG, a group of Kurdish fighters demanding autonomy for the area they consider part of Syrian Kurdistan.

Gaining Kobane, known as Ain al-Arab in Arabic, would be a huge strategic victory for IS, allowing it to control a large section of the Turkish border.

Until last month Kobane had been a safe haven for Syrian Kurds but the KPG say they have been overwhelmed by the Islamist militants who they say are armed with heavy weapons seized from the Iraqi army.

"Around 25 villages have been evacuated. Kobane is now surrounded on three sides," Alan Semo, the PYD's UK-based representative, told Middle East Eye via Skype. "Most of their [IS] weapons are tanks, American tanks which they seized from Mosul from the Iraqi army. Our fighters cannot do much against those tanks." 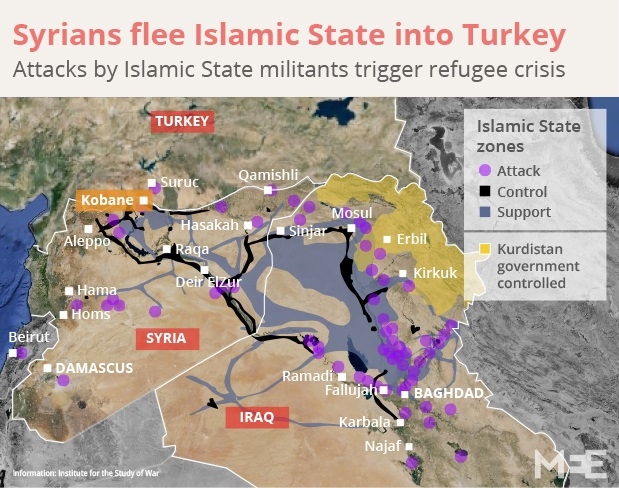 Semo said that the Islamic militants were trying to do a "second Sinjar," referring to the massacre committed by IS militants against the Yazidi community last month in Sinjar.

"The Kurdish community should be protected because they are defending democracy," said Semo. "They are one of the only groups in Syria to have established a stable, democratic system in their areas, they should be defended." Islamic State
IS calls on supporters to kill Americans and Europeans 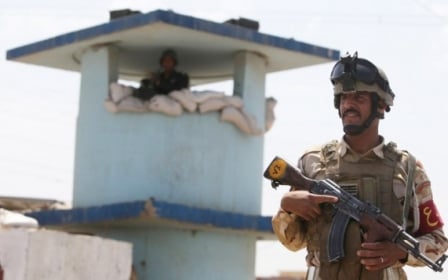