IS reportedly wooing children with incentives, giving them option to become official fighters with salaries once the boys turn 15 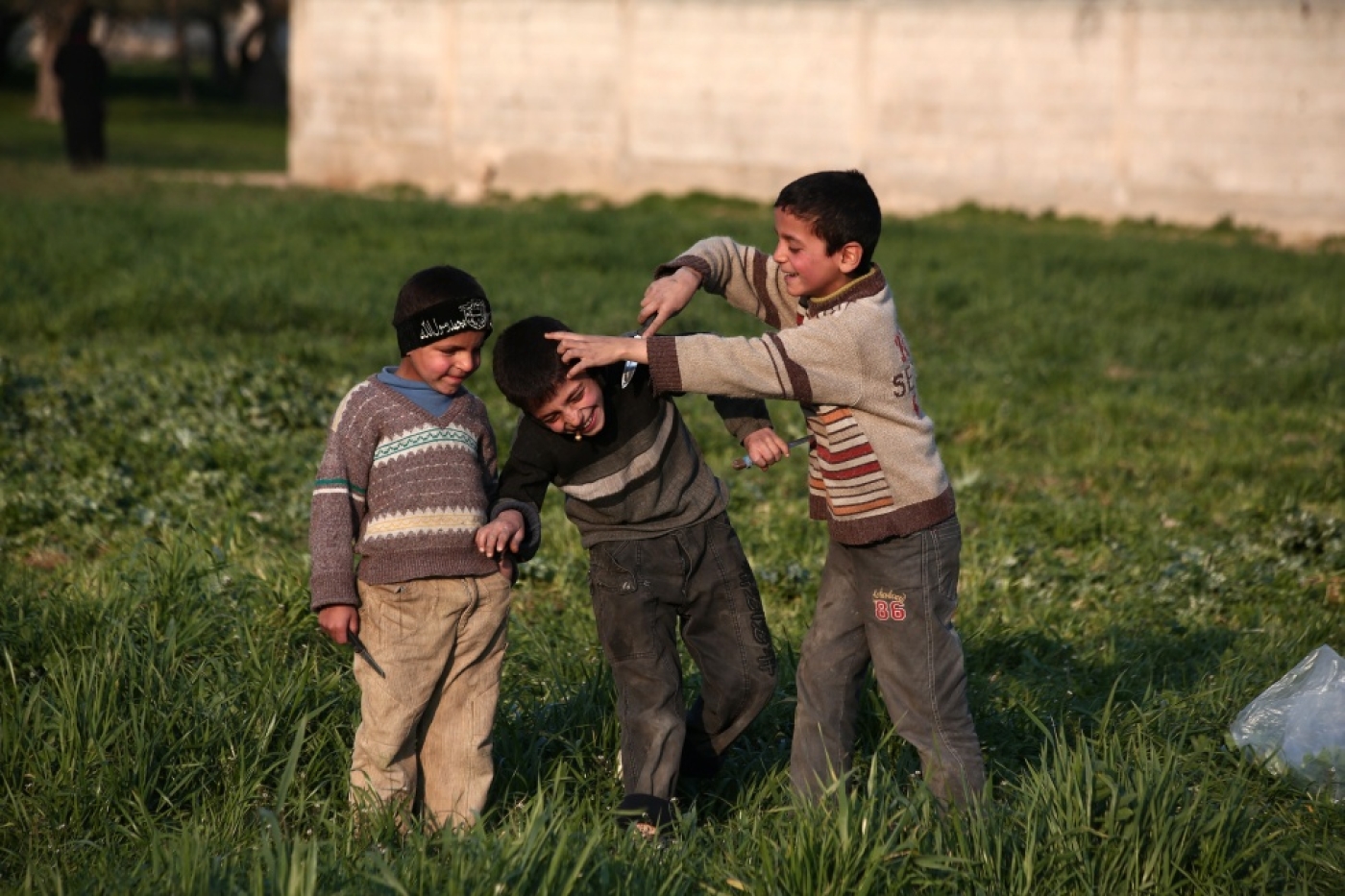 Syrian children re-enact scenes they said to have seen in Islamic State videos in the Damascus suburb of Douma on 5 March, 2015 (AFP)
By
MEE and agencies

The Islamic State (IS) has recruited and trained more than 400 children in Syria as fighters in the first three months this year, according to the Syrian Observatory for Human Rights.

The children, all under the age of 18, are called the Cubs of the Caliphate and were recruited from around mosques, schools and public areas where the Islamic State carries out brutal punishments.

IS has provided the children with intense military training and ideological indoctrination in the areas it controls within Syria, said the UK-based Observatory.

“They use children because it is easy to brainwash them,” said Rami Abdulrahman, the head of the Observatory. “They can build these children into what they want, they stop them from going to school and send them to IS schools instead.”

IS recruited some of the children without their parents’ consent, luring them with money. The group also encouraged other parents to send their children to IS training camps, where it welcomes children with birth defects into its ranks, the Observatory added.

“IS officials try to woo children with money, weapons and teaching them how to drive cars,” said Abdulrahman, adding that once the boys turn 15 they are given the option to become official fighters with salaries.

A Syrian activist from the IS-controlled Raqqa, known as Abu Ibrahim al-Raqqawi, was previously quoted as saying that IS has a number of training camps for the children in the area.

“There are at least five known IS youth training camps across Raqqa,” he said. “When camp commanders, known as ‘emirs’ are not needed in battle elsewhere in Iraq and Syria, they lead child recruits through a preliminary 45-day ‘legitimacy training’ followed by three months of intense ‘war courses.’”

At the training camps, children are familiarised with how to man and fire a weapon, in addition to how to fight in battles. Most are used as guards for IS’ command centres, checkpoints and as informants where they can gather information in the areas beyond the control of IS.

Yet some children are given far more violent missions to undertake.

A harrowing example emerged earlier this month when a video was released by IS that showed a boy, no older than 12 years old, executing a Palestinian citizen of Israel who was accused of being a Mossad spy several times with a gun.

Abdelrahman said that IS had formed children-only battle units, and had already used at least 10 children as suicide bombers in Syria.

IS has been recruiting children across Syria and Iraq since the summer of 2014, but have increased their efforts to add more to its ranks this year.

In February, local sources in the provinces of Anbar and Ninevah in western and northern Iraq confirmed that IS had launched a major recruitment operation, focusing on children as young as 13.

The recruitment operation was given the name “Pride and Jihad” and had attracted hundreds of teenagers, according to the deputy head of the Nineveh Provincial Council. IS distributed clothes and gifts to the children, and their parents were too intimidated to prevent their children from joining the training camps.

Abdelrahman stated that the reason IS is resorting to drafting children is due to the difficulties the group has had with recruitment since the beginning of the year, with only 120 fighters joining its ranks. Tighter controls on the Turkish border, where fighters usually enter from, and the airstrikes from the US-led international coalition against IS have affected its popularity and willingness to join amongst would-be recruits.