Despite horror of losing his wife and three children in bombing, Palestinian father says he 'was about to fly out of happiness' when he learned his baby Omar was alive 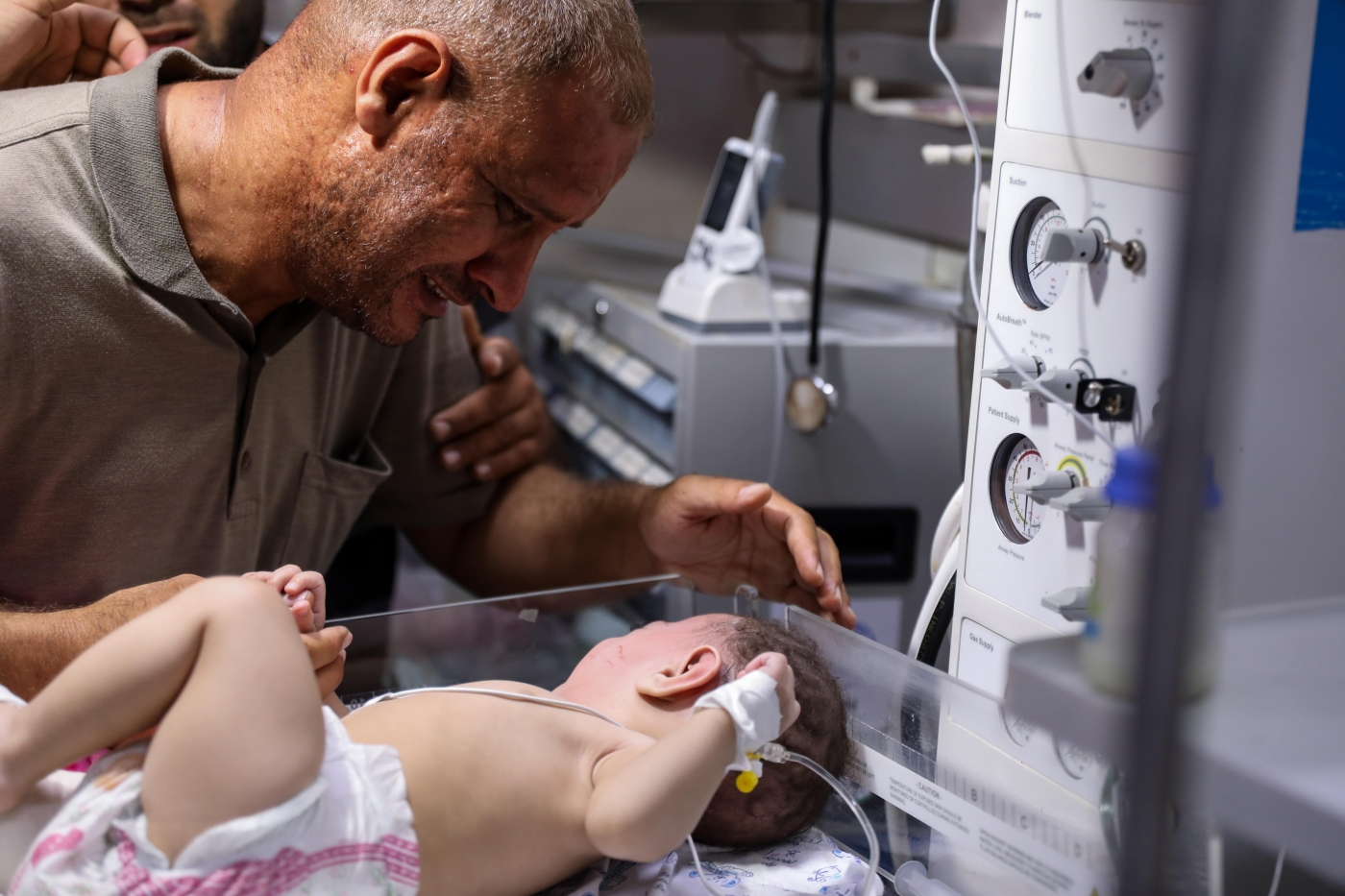 Mohamed al-Hadidi lost his wife and three of his five children in an Israeli air strike on Gaza on Saturday, but his five-month-old infant was rescued. His fifth child remains missing under the rubble (MEE/Mohammed al-Hajjar)
By
Maha Hussaini
, Mohammed al-Hajjar
in
Gaza Strip

As Israeli jets rained down bombs across Gaza on Saturday, families persevered in trying to celebrate the end of Ramadan.

In the al-Shati refugee camp that morning, Israeli jets struck a residential building, killing 10 members of the same Palestinian family, including eight children.

"They put on their Eid clothes and went to celebrate it with their uncle, just like any innocent children would do. They were celebrating Eid. They [Israeli forces] targeted the house without prior warning," said Muhammed al-Hadidi, the step-brother of the house owner.

The three-storey building belonging to the Abu Hatab family was targeted by Israeli F16s without prior warning while its residents were sleeping at dawn, eyewitnesses told Middle East Eye.

This infant survived an Israeli air strike on his uncle's home that killed his mother and his three brothers.

Hadidi lost his wife and three of his five children in the attack, while his five-month-old infant was rescued. His fifth child remains missing under the rubble.

"I was shocked when I received the news. I was paralysed and horrified and fell to the ground crying,” Hadidi told Middle East Eye at the al-Shifa hospital in Gaza.

"My wife and children were at her brother's house when the Israeli air strikes completely knocked down the building."

The air strikes killed Hadidi's wife and three children - Osama, six, Abdulrahman, eight, and Suhaib, 14. The children's cousins from the Abu Hatab family were also killed in the attack, including five-year-old Yamen, Bilal, 10, Yusuf, 11, and Mariam, 15, in addition to a 31-year-old woman, Yasmeen Hassan.

Eyewitnesses reported that the victims' bodies were torn to pieces under the rubble before being transferred to the hospital.

When he was confirming the identity of his deceased children at the hospital, Hadidi received the news that his infant, Omar, was still alive.

He knelt down to the ground crying.

"I was so sad that I felt suffocated when I knew that I had lost my wife and three of my children, but at the same time, I felt that I was about to fly out of happiness knowing that my baby Omar did not die. It was a bizarre moment."

"I went to [the hospital] to see him. I kissed him and cried next to him a lot. But the doctors prevented me from hugging him because of the fractures he sustained," Hadidi continued.

"I do not know how the world will look like for Omar when he grows up and knows what happened to his mom and siblings, or how I will survive after losing my children and my beloved wife."

Avichay Adraee, the spokesman for the Israeli army, said in a tweet that the "defense army targeted a number of Hamas officials inside an apartment used as a terrorist building in the al-Shati refugee camp," adding that the incident was still "under examination".

"This was a safe home that only contained two women and their children. What did these children do? How could this criminal occupation bomb them? What is its excuse this time?" Khaled al-Hadidi, from another branch of the family, said to MEE.

"The occupation is trying to score a victory over the bodies of children. They play victim day and night and say that they have the right to defend themselves, then commit the ugliest and most brutal crimes against our children. How can the world remain silent?" 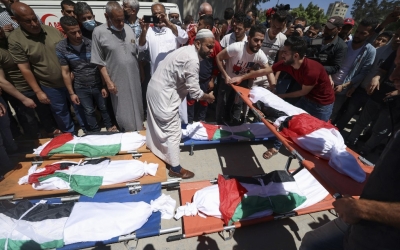 Two days before bombing the building, an Israeli air strike targeted a residential apartment in the same neighbourhood, killing an elderly woman and her disabled son.

"We still haven't got over the shock of bombing an apartment in our neighbourhood and killing two innocent civilians. Now we have witnessed the harshest experience ever after bombing the building right in front of our home," Ahmed al-Hadidi, a family relative and neighbour, told MEE.

"At around 2am and when our children were asleep, I was still awake listening to the news of the Israeli massacre in the north of the Strip. Suddenly the explosion rocked the area. I did not hear the sound, I just felt the massive pressure. The windows, the furniture, everything was destroyed," he said.

According to eyewitnesses, Israeli F16s targeted the building with at least three missiles.

"I took my children and rushed outside. When I went down the street, I saw my relatives'  building completely knocked to the ground. I was speechless and devastated knowing that there were children with their mothers sleeping inside.

"This was the most difficult moment in my entire life."

The Geneva-based Euro-Mediterranean Human Rights Monitor documented 19 cases where the Israeli forces targeted extended families in Gaza, killing at least 53 Palestinians, including 20 children and 14 women, between 10 and 15 May.

"I realised that my child Ali, who I was holding, was also bleeding and screaming. I did not know what to do. I was in complete shock, so the neighbours rushed to help," he said.

"After all this violence and excessive force the occupation is using against our children and women, I do not think that we can ever tolerate it.

"There are horrific scenes that have been deeply engraved in each of these children's minds." Gaza Under Attack
War on Gaza: Netanyahu vows to take 'as long as necessary'