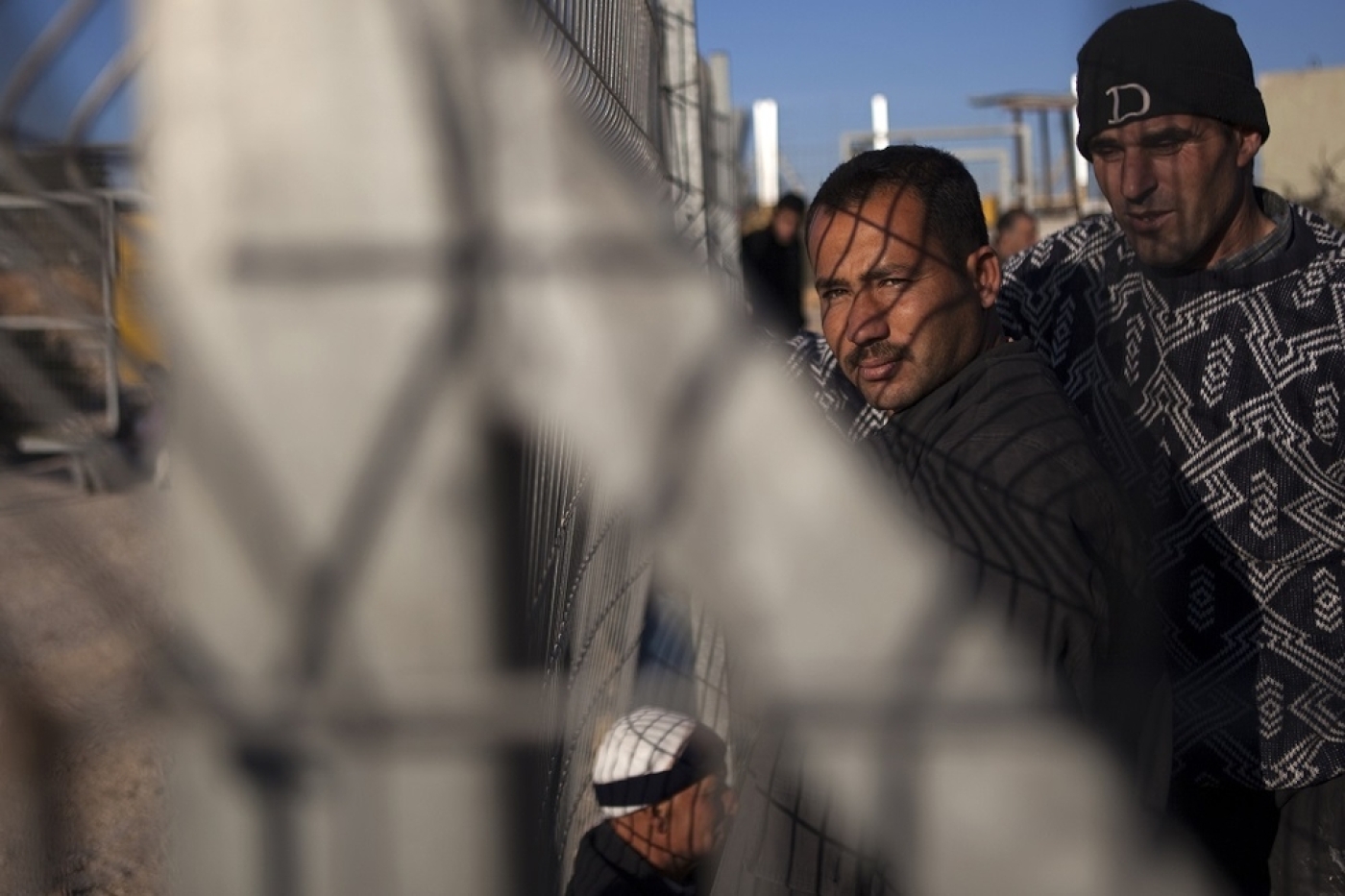 Palestinian workers wait for the gate to open between the illegal settlement of Modiin Illit and Harbeta after a day of work in Israel. Tens of thousands of Palestinians work inside Israel (AFP)
By
Chloé Benoist

Israeli police announced on Tuesday the arrest of at least 468 Palestinians working illegally inside Israel since the launch on Saturday of a "deep-clean" operation before the Jewish Passover holiday.

According to a statement, 2,300 officers and "volunteers", assisted by the air force, had raided dozens of locations in Israel. In addition to undocumented workers, 32 individuals were held for employing Palestinians without permits or transporting them illegally into Israel.

Micky Rosenfeld, an Israeli police spokesman, told Middle East Eye that the operation against illegal workers was the biggest for "several months".

"These operations will continue as long as necessary in different areas, as part of security in order to prevent incidents from taking place," he said.

Rosenfeld later told MEE that 14 people accused of “terrorist activities” had been detained as part of the operation, including five in Umm al-Fahm – a Palestinian-majority town in Israel – and nine others suspected of transporting them within Israel. Rosenfeld declined to give further details on the accusations levied against these 14 people.

The police operation, called Removing Chametz, refers to the religious custom of removing all traces of leavening products such as yeast from one's home before Passover, either by cleaning all surfaces, burning leavened products, or giving them to non-Jews.

Adalah, an NGO dedicated to Palestinian legal rights inside Israel, denounced the operation and the troubling connotations of its name.

"Israeli police's terminology towards people, like food that must be cleaned and removed, attests to the racist character of the police activity," the organisation said in a statement on Tuesday afternoon. "Indeed, this is an ethnic cleansing."

Israeli forces typically increase security measures before and during Jewish holidays, such as increased security in annexed East Jerusalem and closures in the occupied Palestinian territories, forbidding Palestinians with permits from entering Israel except in cases of emergency – a measure that affects tens of thousands of Palestinians working in Israel.

According to official Palestinian news agency Wafa, Israeli forces will enforce an eight-day closure on the West Bank and Gaza starting Thursday, a day before the beginning of Passover.

Adalah on Tuesday criticised the crackdown on undocumented workers being carried out under the guise of security, arguing that those who were detained did not constitute a threat to Israelis.

"These Palestinians do not have any intention to harm anyone yet the police treat them like criminals who must be arrested, for no fault of their own," the NGO stated.

The Coordinator of Government Activities in the Territories (COGAT), the Israeli army agency responsible in the occupied Palestinian territory, reported in 2017 that 70,000 Palestinians with permits cross daily into Israel to work.

High unemployment rates and low wages in the occupied West Bank push many Palestinians to seek employment in Israel and illegal settlements, mainly in construction or other blue-collar jobs.