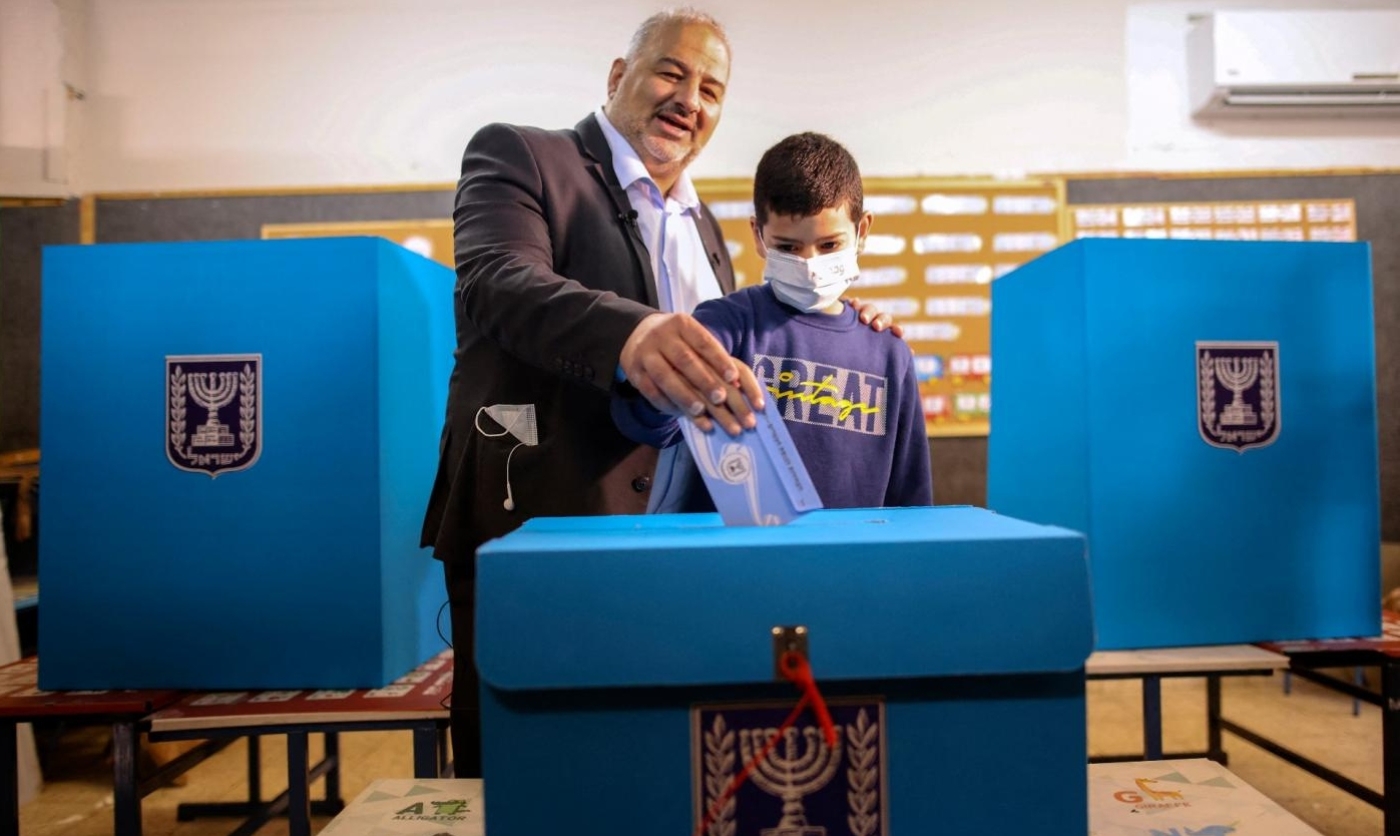 Election-weary Israelis are voting once again in the fourth national polls in just two years, with a fifth round a distinct possibility if another stalemate emerges.

Prime Minister Benjamin Netanyahu's Likud is projected to win by far the most seats: around 30 of the 120 in Israel's parliament, the Knesset.

Yet it is far from certain that he and his allies on the right will cobble together enough seats to form a coalition government, which needs at least 61 to govern.

If Netanyahu succeeds, Israel will have the most right-wing government in its history, and is likely to contain far-right followers of racist rabbi Meir Kahane.

On the other side of the divide lies a disparate collection of anti-Netanyahu parties, ranging from those on the right that once sat with him, such as Gideon Saar's New Hope and Avigdor Lieberman's Yisrael Beiteinu, to left-wing former powerhouses Labor and Meretz.

Joining them is the splintered Joint List, which represents Palestinian citizens of Israel but lost one of the four parties that made up the alliance, and Blue and White, the centrist faction of Defence Minister Benny Gantz, who was lured into an unstable coalition with Netanyahu last April and now may not make parliament at all.

Enas Masri, a 40-year-old education worker, lives in the Palestinian village of Jaljulia, where less than two weeks ago two children were shot in an incident linked to organised crime. One died, sparking fury in the community which has long sought more security and less police brutality from Israel's leaders.

"I didn't vote in the last three elections and I also won't vote this time. It's a game and I don't think the Israeli Knesset is my place," Masri told Middle East Eye.

"We are living in an illusion, especially regarding the idea of citizenship. We haven't achieved anything so far inside the Israeli parliament and we couldn't change our reality. I believe we must build our own autonomy as Palestinians inside Israel and we have to act on the ground and not in the parliament."

Prize of the justice ministry

Many have cast this election, like those before it, as a referendum on Netanyahu who, having been in charge for 15 years, is Israel's longest-serving prime minister.

But for veteran Israeli political analyst Meron Rapoport, this latest round is truly a battle over the justice ministry.

Netanyahu personally has much at stake in the judicial system. He is fighting corruption charges which could jeapordise his freedom, as well as his political career.

Meanwhile, Rapoport notes his far-right and religious allies have their own motives for getting hold of the justice ministry, which Blue and White has controlled in the outgoing government.

"The real battle will be over the justice ministry, this is the most important office after the prime minister. Netanyahu wants to get rid of his corruption case and the right wing wants to cut the wings of the High Court so they can do whatever they want regarding West Bank settlements, women and the LGBT community," Rapoport told MEE.

"They want to keep the lawmaking in their hands."

Four major parties are in danger of failing to secure the 3.25 percent of the vote needed to pass the threshold to enter parliament: Meretz, Blue and White, the far-right Religious Zionism party, and Raam, a Palestinian faction that controversially split from the Joint List.

In recent polls, they have all been projected to pass the threshold. However, if any of them fail to enter parliament it would have major implications for Netanyahu's chances of forming a government.

Meretz has spent much of the election campaign warning of its possible demise, and on Tuesday told the central elections commission its "ballots are systematically disappearing at the polling stations" at locations such as Tel Aviv and Jerusalem. The party insinuated that the alleged missing ballots were part of a right-wing campaign to stop it from entering parliament. 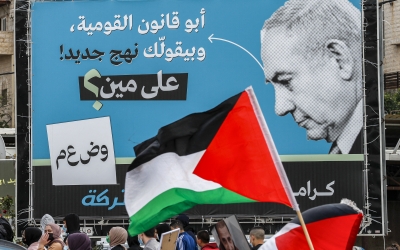 Gantz was once a serious challenger for the premiership, but shocked his supporters when he abandoned his vow to never sit with Netanyahu while he faced corruption charges and joined the prime minister in a coalition government that looked doomed from the start.

That decision cost him his ally Yair Lapid, whose centrist Yesh Atid party is set to take around 18 seats and become the country's second-largest, and the majority of his support, with Blue and White projected to take just four seats.

Lapid, meanwhile, said as he voted in Tel Aviv that Netanyahu would seek to form a right-wing "racist and homophobic" government if he won.

"This is the moment of truth," he said. "There are only two options: a large Yesh Atid or a government of darkness, racism and homophobia."

On Religious Zionism's list of candidates is Itamar Ben-Gvir, a Kahanist who has voiced admiration for Baruch Goldstein, the mass-murderer of 29 Palestinian worshippers in the occupied West Bank's Hebron in 1994.

Currently, the Joint List is one of the largest parties in the Knesset, with a record 15 seats. But Raam leader Mansour Abbas threw the alliance into crisis by announcing that his party was running alone.

Rapoport says Abbas' ploy is a continuation of the tactics used by Ayman Odeh, the Joint List leader who flirted with entering government with Gantz before the former army chief joined Netanyahu instead.

'Along with the struggle against crime and house demolition, the Joint List is the only party that still speaks about the occupation in the Israeli parliament'

Previously, Palestinian parties have always served as opposition, and the mainstream Zionist politicians and leaders have repeatedly said they would not sit alongside them. Some are speculating that Raam - projected to win four seats - could even push Netanyahu over the 61-seat line.

"Mansour Abbas said he will play the game to the end and sit with those who have power," Rapoport said. "He has also found much in common with the Israeli conservative parties regarding religious law and LGBT issues."

Maha Igbariyya, a Palestinian activist in the northern Israel town of Umm al-Fahem, is urging people in her community to vote for the Joint List, insisting its MPs have done important work in highlighting the issue of organised crime that blights its towns and villages.

"For two years the Joint List has been highlighting this issue in the parliament, and without the Arab MPs, no one would hear about it. The Arab MPs did a lot for '48 Palestinians and they deserve our trust and support," she told MEE.

"Along with the struggle against crime and house demolition, the Joint List is the only party that still speaks about the occupation in the Israeli parliament. This topic is dead in the other parties and no one is mentioning that. I think this is the main problem that should be solved."

Though an estimated five million Palestinians live under Israeli military occupation or siege in the West Bank and the Gaza Strip, they are unable to vote in an election that will have far-reaching consequences for their lives.

The Israeli military closes down the West Bank for every election as its citizens in illegal settlements freely vote.

The Covid-19 pandemic has naturally cast a shadow over the election.

Netanyahu has put Israel's vaccination campaign at the heart of his message to voters, while opponents have reminded the public of the haphazard way lockdowns were utilised and the government's poor record of economic support.

No community in Israel was hit harder than the Ultra-Orthodox, whose often-impoverished neighbourhoods were isolated and in many cases demonised for spreading the coronavirus.

Tsipora Gotman, an Ultra-Orthodox Israeli from Bnei Brak, told MEE that the pandemic revealed a tension in the community over its place in society - one that is being seen again on polling day. 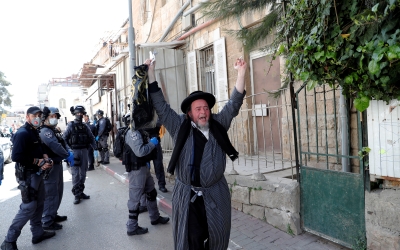 "In protest against the government's handling of corona, many are voting for Religious Zionism instead of Shas and UTJ - the Ultra-Orthodox parties."

Gotman said in the end the Ultra-Orthodox support Netanyahu because he provides cash for their yeshivas and doesn't interfere in their affairs.

Shas and UTL are slated to get seven to eight seats each - numbers that rarely change as religious leaders in the Ultra-Orthdox communities routinely get out the vote.

Yaakov and Rafael, two Ultra-Orthodox 18-year-olds, voted for Shas. "Because we wanted to make the rabbi happy," Yaakov said.

"This means that in a few years I will not know if a person is a Jew or a Gentile!" he said. 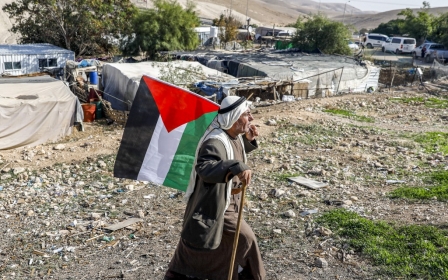 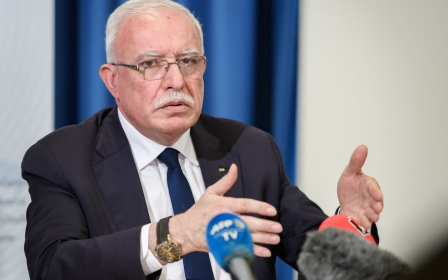 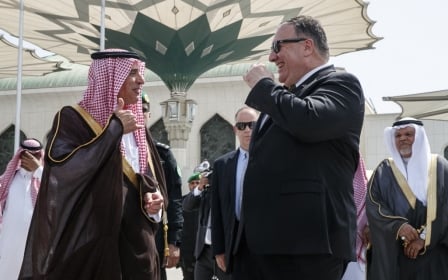