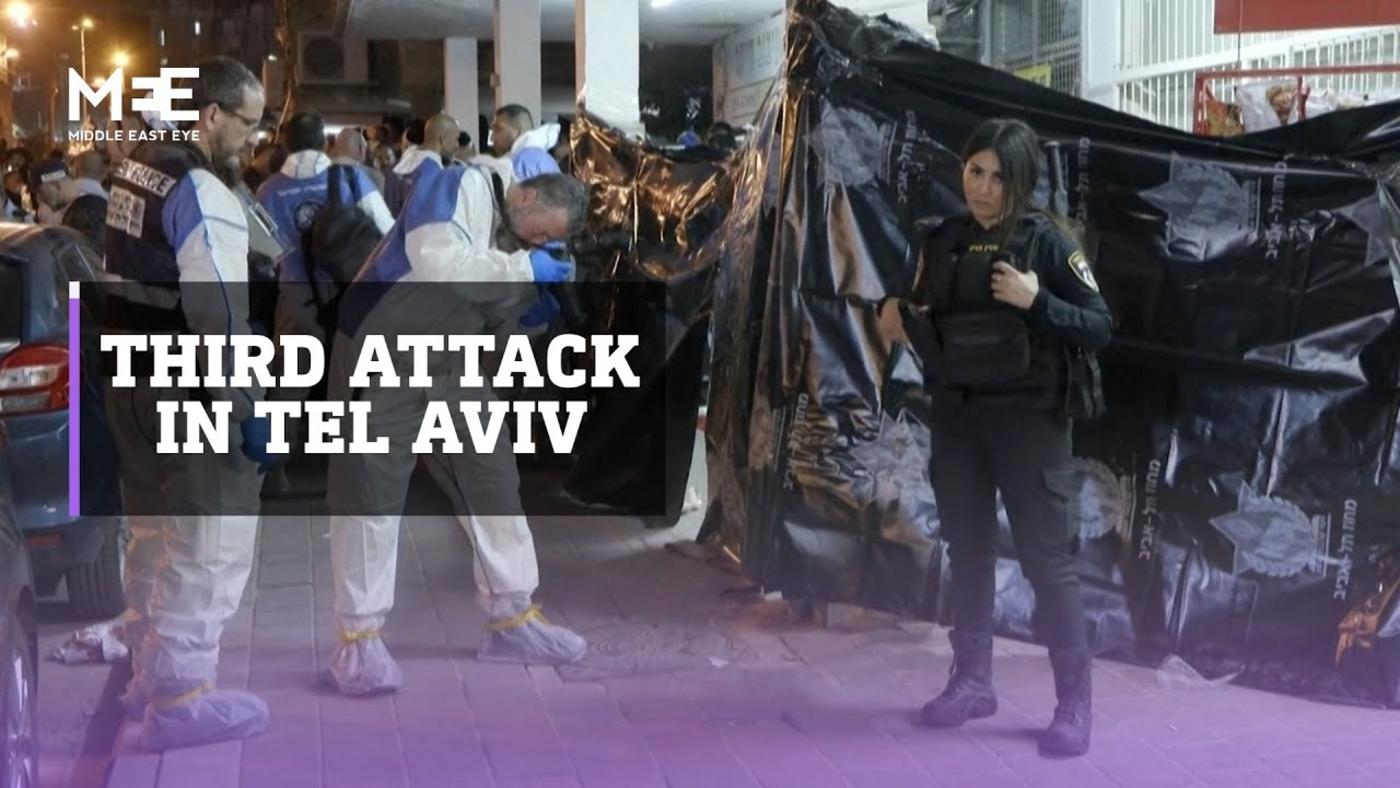 Friends and family mourn at the funeral of Avishai Yehezkel who was killed during an attack in the Israeli city of Bnei Brak (Reuters)
By
Lubna Masarwa
, Huthifa Fayyad

A gunman killed five people on Tuesday in a shooting in the suburbs of the Israeli city of Tel Aviv, days after two similar attacks left six people dead and several injured.

The assailant, identified as 27-year-old Diya Hamarshah, was later fatally shot by police.

Local media said Hamarshah was a former Palestinian prisoner from the occupied West Bank city of Yabad near Jenin. 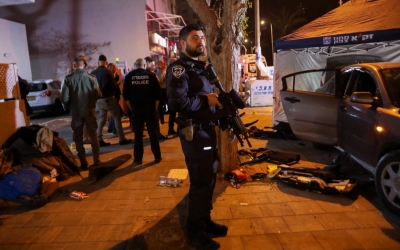 The assailant fired at a young man in a convenience store, using an assault rifle, before shooting at another person riding on a bike then shot at a passing car, Haaretz reported.

A Bnei Brak resident, who lives near the location of the attack and preferred not to give her name, told Middle East Eye that the shooting left her "scared and sad."

"I feel unsafe. I can't believe it happened this close to us. I am always shocked to see incidents like this - but when it's so close it hits different," she said.

"I don't think there's a future in Israel. The clock is turning back. I have no hope."

Police announced they have raised the level of alert to the highest it has been since May last year.

Palestinian Authority President Mahmoud Abbas was quick to condemn the attack, saying "the killing of Palestinian and Israeli civilians will only lead to a deterioration of the situation at a time when we are trying to reach a stabilisation on the eve of the month of Ramadan."

"Five civilians were killed today- each a world in their own right. They join the 51 Palestinians killed since the beginning of the year - each one a world in its own right," Odeh said.

"I strongly oppose any harm to civilians, Palestinians or Israelis alike, along with all harm to innocent people," he added.

"It is time to end the source of hatred that is the damned occupation, and to establish peace that will bring security and normal life to both peoples"

'Israel has itself to blame'

Tuesday's attack comes days after two similar attacks by Palestinian citizens of Israel in Beersheba and Hadera, which left a total of six people killed, including two police officers. All three assailants were killed.

The attack also comes a day before the 46th anniversary of the first Land Day. Palestinians have marked Land Day every 30 March since 1976, when Palestinian citizens of Israel protested against Israel's land grab policy and discrimination.

Israel analyst Meron Rapoport told MEE that the attacks will likely leave the Israeli government in a very difficult place.

"Israel is very embarrassed in the face of this situation because it has no one to fight against. It is not possible to occupy Palestinian cities like in 2002 because they are already occupied, nor can it "occupy" Umm al-Fahm because they are Israeli citizens," Rapoport said.

'The Palestinian issue has been turned into merely an internal Israeli issue, and that is exactly what is happening now. Israel has only itself to blame.'

"Israel may have been happy that the West and Arab states stopped taking an interest in the Palestinian cause, and the summit in the Negev was supposed to be proof of that. But - as professor Menachem Klein said in a personal conversation - the Palestinian issue has been turned into merely an internal Israeli issue, and that is exactly what is happening now. Israel has only itself to blame."

The violence, however, will be exploited by the far-right in Israel, Rapoport warned.

Shortly after the attack, scores of Israelis gathered at the scene where they could be heard chanting anti-Palestinian slogans, including "death to Arabs". Some were calling for Bennett to resign.

Far-right influence within the police force and in mainstream politics has been on the rise in Israel in recent years.

Those forces, Rapoport explained, will now use these events to break up the government, which is a fragile alliance of forces from the right, left and centre, as well as Palestinian parties.

"The far-right are scared that Israel will become a true democracy - so they want to remove the Palestinians from the political life."

In Yabad, the reported hometown of Hamarshah, crowds took to the streets after the attack to show solidarity with the family in anticipation of expected army raids.

Raed Bakr, a resident of Yabad, told MEE that Dotan checkpoint, located south of Yabad, which is on the road that connects Jenin to Tulkarm, was closed after the attack.

"Young men, in preparation of Israeli raids, closed off the entrance of Yabad using rocks and rubbish bins," Bakr said.

"Things are quiet at the moment, but people are expecting army raids at any moment."

"The violence used by Israel, a racist state, against Palestinian in the West Bank and within Israel, will of course lead to violence from Palestinians in return," al-Mashni told MEE in a phone interview.

"Expelling residents in Naqab, the Judaisation of Jerusalem, attacks on Sheikh Jarrah, provocations at al-Aqsa Mosque, daily killings in the West Bank  - all of this naturally leads to counter-violence. This violence is the sole responsibility of Israel," he added.

"It's early to suggest that we are entering a new phase - but we are certainly in a phase that is characterised by violence and deterioration."

Tensions have been running high in recent weeks in the run-up to the first anniversary of Israel's 11-day offensive on Gaza.

According to Axios, US officials have been working to maintain calm in Jerusalem ahead of the anniversary of the conflict where more than 260 Palestinians were killed in Gaza, 29 in the occupied West Bank, and 13 people were killed in Israel.

'Arab leaders are separated from reality'

Earlier this week, the foreign ministers of Morocco, Egypt, Bahrain, the United Arab Emirates (UAE), and the US met in Israel for a two-day summit in the Naqab (Negev) to discuss regional issues.

The series of high-level meetings between regional leaders in recent weeks has been viewed as an attempt to ease tensions ahead of the Muslim holy month of Ramadan, which is due to start next week. 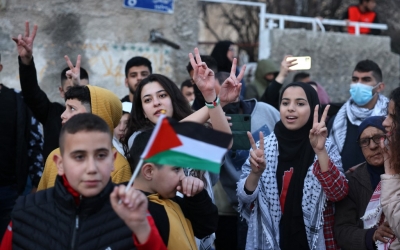 Israel-Palestine: Why Sheikh Jarrah and al-Aqsa could ignite a new intifada
Read More »

Despite the efforts to reduce tensions, Israeli settlers have continued to storm al-Aqsa Mosque. More settler marches are expected in al-Aqsa this Ramadan, which will overlap with Jewish holidays.

Israel occupied East Jerusalem, where al-Aqsa Mosque is located, during the 1967 war. It annexed the entire city in 1980 in a move never recognised by the international community.

Jordan has been the custodian of Jerusalem's Muslim holy sites since the 1920s. The mosque, which sits on a tree-lined plateau in the Old City, is also revered by Jews who call it Temple Mount.

Israeli far-right activists have repeatedly pushed for an increased Jewish presence at the site and some have advocated for the destruction of al-Aqsa Mosque to make way for a Third Temple. 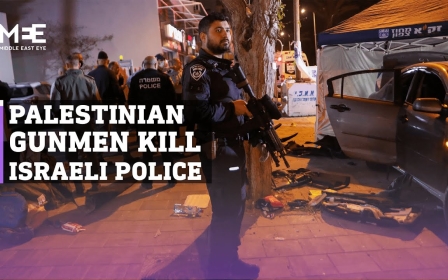 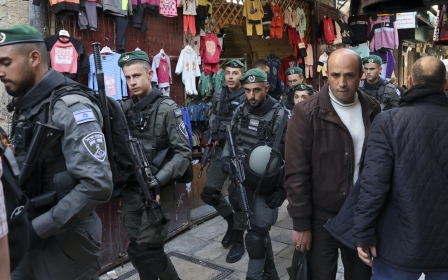 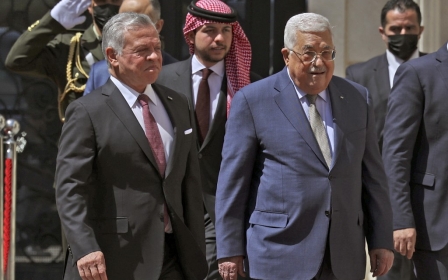