Israeli forces shot at least five Palestinians with live bullets on Wednesday during a demonstration in the Gaza Strip calling for an end to the 14-year Israeli-led blockade of the small coastal enclave.

Official Palestinian Authority news agency Wafa reported that at least one minor was  hit by live ammunition east of the town of Khan Younis near the border with Israel.

The Gaza-based Ministry of Health reported a total of 14 people injured, including five by live bullets, two hit by rubber-coated steel bullets, and seven hit by tear gas canisters.

The protest took place just hours after the death of Osama Khaled Ideij, a 32-year-old Palestinian from Jabalia in northern Gaza who was shot by Israeli forces during weekend protests and succumbed to his wounds on Wednesday morning.

Dozens of Palestinians and an Israeli police officer were injured on Saturday after Israeli troops fired on Palestinian protestors commemorating the 52nd anniversary of a 1969 arson attack on the al-Aqsa Mosque.

Wednesday’s protest in Khan Younis, on the southern tip of the Gaza Strip, was called after Israel launched air strikes on Gaza on Monday.

Israeli forces fired at least three missiles at a target in Khan Younis and struck empty agricultural land in Gaza City's al-Zaytoun neighbourhood, according to the Quds news network.

The latest escalation in violence comes three months after Israel bombarded the Gaza Strip over 11 days, killing at least 260 Palestinians, according to the Palestinian health ministry.

Some 13 people were killed in Israel by rockets fired from Gaza during the same period.

Two million Palestinians live under a siege in Gaza that is upheld by both Israel and Egypt, with Israel restricting the movement of goods and people in and out of the small Palestinian territory.

Israel’s control over the entry of material has affected Gaza’s infrastructure, with shortages of electricity and drinking water leading the UN to warn in 2015 that Gaza would become virtually unlivable by 2020.

Last week, a decision by Israel to confiscate 23 tonnes of chocolate bars destined for Gaza, based on the claim that sales would fund Hamas military operations, sparked ridicule and criticism on social media. 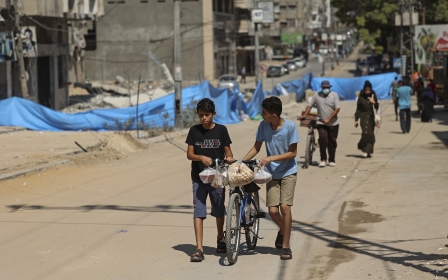