Naftali Bennett: Israel’s hawkish right-winger on the cusp of power

The former defence minister has said he has no problem with killing Arabs and has urged the bombing of Gaza. Now it looks like he will end Netanyahu's 12 years in power 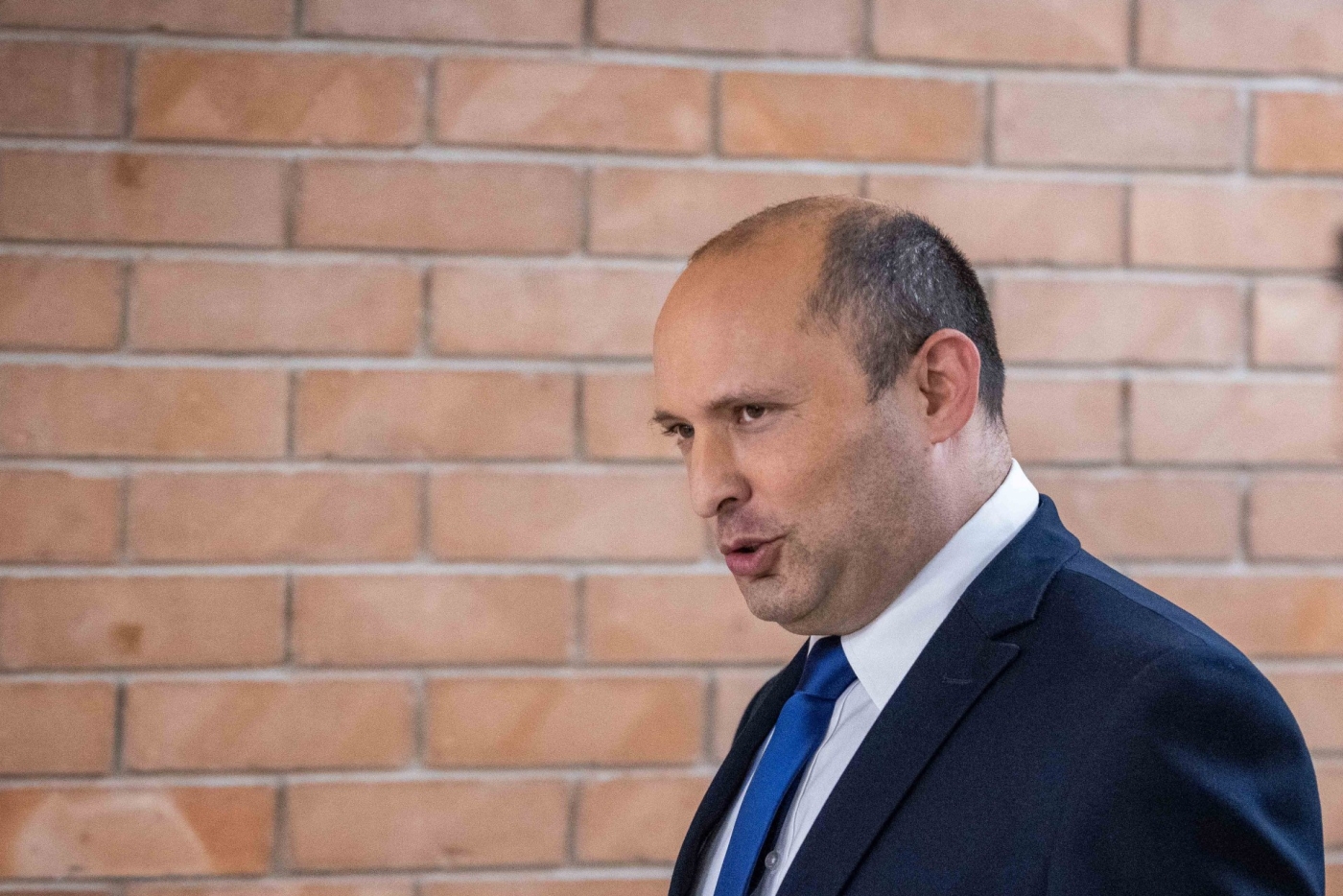 Leader of the Israeli Yamina Party, Naftali Bennett, arrives at the Knesset, the Israeli Parliament (AFP)
By
Shir Hever

In shifting his support from Benjamin Netanyahu to opposition leader Yair Lapid, and most likely securing himself the premiership, Naftali Bennett has made headlines not just inside Israel but in the international media.

Becoming prime minister after 12 years of Netanyahu would be a momentous moment for Israel and the world, but will not come without turbulence. Lapid, though a personal friend of Bennett, is forming a wide coalition of small and fragmented political parties from the left and from the far right. It will not be simple to wield power.

As a politician associated with the national orthodox Jewish movement, which strives for expanding the borders of the State of Israel out of theological reasons, Bennett is among the leaders of the Israeli right-wing. He repeatedly promised his constituents that he will not form a coalition with the parties he calls “left”, from Lapid’s centrist Yesh Atid to the Meretz Party led by Nitzan Horowitz. But in recent days Bennett broke his campaign promises and announced his intention to enter Lapid’s coalition, including leftists and Palestinians, in exchange for being nominated prime minister.

In 1996, Bennett was a military officer and called for an artillery bombardment to cover the retreat of his unit near the village of Kafr Kana in Lebanon. This barrage killed over 100 Lebanese civilians. Bennett was then labelled a coward for ordering the retreat and the artillery support.

Like many of Israel’s major political actors, such as Attorney-General Avichai Mandelblitt and Yisrael Beiteinu leader Avigdor Lieberman, Bennett began his political career by serving as the chief of staff of Netanyahu’s office, briefly in 2005 while the Likud chief was head of the opposition.

This paved his way to the leadership of the national orthodox party associated with the settler movement, then called Jewish Home.

He became the head of the Yesha Council, the alliance of municipalities of Israel’s illegal settlements in the occupied West Bank, which serves as the unofficial leadership for the settler movement.

As a politician, Naftali Bennett developed an image of a man fraught with internal contradictions, one who attempts to act as tough and hawkish but consistently fails to live up to that role. He leads the settler movement, but himself lives in Raanana on the Israeli side of the Green Line. As a millionaire and former start-up manager, he makes an uncommon leader for the settler movement.

Bennett leads a religious movement, but his wife was secular. In 2014, as minister of education, he pushed for a more brutal bombardment of the Gaza Strip during a conflict that year. During the Israeli invasion, Bennett used connections with military rabbis in order to obtain information, which he claimed the army and the prime minister would not share with the cabinet.

Bennett’s public statements have been calculated to position him on the side of the hawkish, racist and religious side of Israeli politics

Bennett’s public statements have been calculated to position him on the side of the hawkish, racist and religious side of Israeli politics. He famously said in 2013: “I’ve killed lots of Arabs in my life and there’s no problem with it,” and “the Palestinians are like a [bomb] fragment in the bum”. In 2018, he threatened to bomb Lebanon back to the Stone Age.

In 2017, he compared Jewish parents who protested against religious indoctrination in Israeli schools to “Christians who blame the Jews for the crucifixion of Christ” and called left-leaning Jews “auto-antisemites”.

These statements, however, did not prevent satirical shows from mocking him as immature, easily offended and meek. A recording from 2018 of Netanyahu calling him a “small dog” was exposed in 2020, to which Bennett responded that “personal attacks do not hurt me.” Bizarre campaign videos of him disguised as a hipster with a fake beard or speaking to a pigeon have fuelled his buffoonish image.

In April 2019, the first of Israel's four elections in two years, Bennett had the humiliation of not winning a single seat when his New Right Party failed to cross the electoral threshold.

Bennett served as a minister under Netanyahu in a variety of capacities: minister of religious services, of Jerusalem, of the economy, of the diaspora, of education and finally minister of defence.

The latter was well known to be a burning desire of Bennett’s for many years, but he served as defence minister for only a few months, between November 2019 and May 2020. During this time, he mainly oversaw regular bombing runs against Iranian targets in Syria, which he claimed to have reduced the presence of Iranian-backed forces in Syria to 30 percent. A famous picture of Bennett standing with an angry face during this time earned him further ridicule. 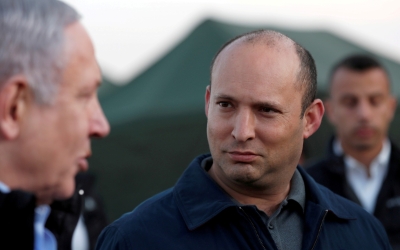 Bennett’s family comes from the US, and he has given a large number of interviews to international media in English claiming that the Bible grants Jews ownership over Palestine. In one such interview, he waved an ancient coin with Hebrew letters on it, saying it proved this claim. Bennett told Al Jazeera’s Mehdi Hasan that Muslims are obligated to accept Jewish control of the Holy Land based on their faith.

Bennett’s party Yamina (“to the right”) won only seven of 120 seats in Israel’s parliament, the Knesset, in March’s elections. One of those MPs, Amichai Chikli, vowed to vote against a coalition government with “leftist” and “Arab” elements, and will not be joining Lapid’s coalition.

Some Yamina voters have reacted furiously to Bennett’s abandonment of the Netanyahu-led right, which appeared in no position to form a government of its own. They have protested outside his house, and Bennett has even received death threats, forcing him to accept a security detail.

Naftali Bennett may have found a way to become a prime minister (for as long as this shaky coalition holds), but in the process, he has lost his own base. 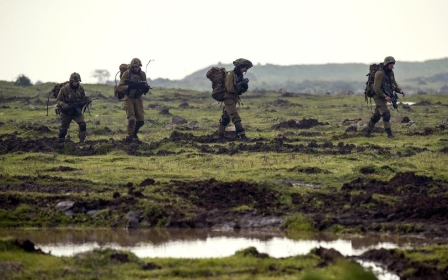 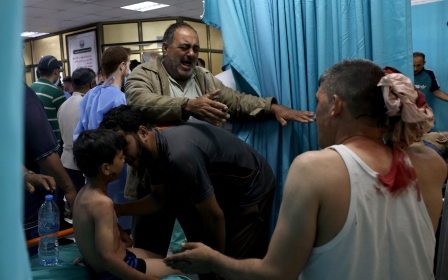