Israel’s untenable foundations exposed as Netanyahu brings in the bulldozers

As the Israeli state is carved up and targeted by its new far-right, ultra-religious government its fabric is unravelling 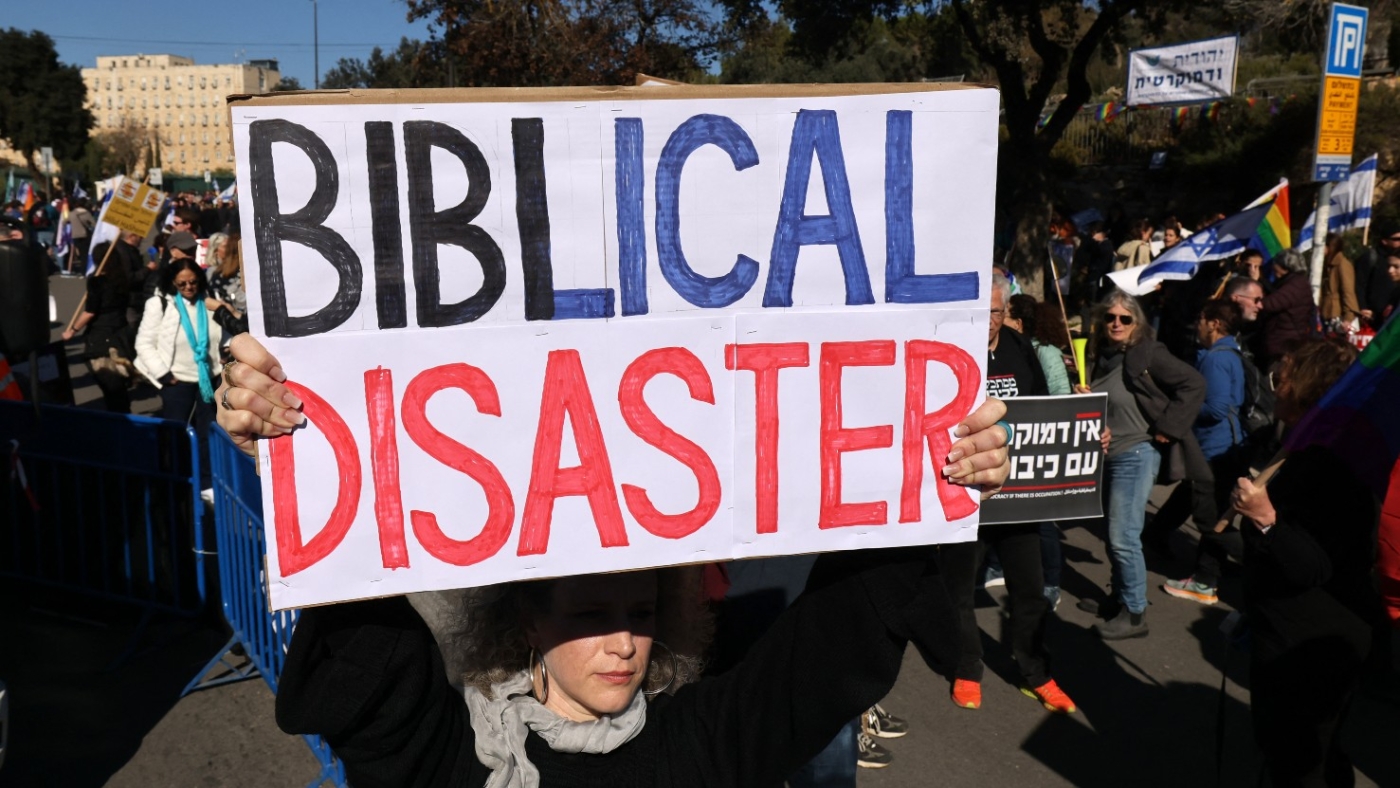 Israeli activists and members of the LGBTQ+ community protest outside parliament in Jerusalem, on 29 December 2022 (AFP)
By
Eyal Chowers
in
Jerusalem

The new Israeli government inaugurated on Thursday is a turning point in this country’s history: it has embraced an agenda that, if implemented, would seriously “contract” the Jewish state’s democratic fabric.

The decline of democratic norms has been mushrooming for years in Israel, expressed mostly in rhetoric and proclamations. Until the 2018 nation-state law enshrining Jewish supremacy, it nevertheless had limited manifestation in legislation.

Now, however, radical laws and government restructuring quickly catch up with extreme words. The new government is set to embrace a regime change, no less, a version of Viktor Orban’s “illiberal democracy”. The coalition, composed of Benjamin Netanyahu’s Likud and five other parties, is set to enhance the conservative, religious and nationalistic, land-centred character of the Israeli state.

It was somewhat surprising that Jews in Palestine, when they embarked on the path of independence during the 1948 war, espoused the idea and practice of a democratic nation state to begin with. Most of the Jews at that time came from Eastern Europe, with little or no democratic experience; the Jews who came later from North Africa to Palestine were no different. In the early writings of the Zionist leaders, one cannot find any canonical or substantial text on democracy, and the concept does not appear in Israel’s Declaration of Independence.

But if Israelis were nonetheless able to form a democratic state with significant liberal principles for its Jewish citizens, as this state approaches its 75th birthday it is evident that liberalism and democratic values generally were not sufficiently loved or deeply ingrained. Palestinian citizens would argue they never benefitted from these values in the first place.

As human beings we need narrative and meaning to justify our actions and conduct. Since perhaps the prime project of the Israeli state since 1967 has been to take control and possess the occupied West Bank and East Jerusalem, the ideologies that justify this policy took centre stage.

Over time, Israeli occupation thus increasingly breeds nationalism and racism to rationalise the dehumanisation, subjection and dispossession of Palestinians.

The constant and growing conflict on the ground leaves little patience among many for the complex workings of democracy and its tedious divisions of powers, as well as for a liberal vision generally. The path for authoritarian ideas and for decline in individual rights has thus been unleashed in Israel. According to data from Freedom House, liberal rights, both political and civil, have been gradually receding in Israel between Netanyahu coming to power in 2009 and 2020 (a decrease of 6.5 percent and 8 percent respectively). From now on, the decline could be much faster.

This radical right wing introduces the rationale of military government, as a system of managing populations, into Israeli political life

The military model of government in the occupied territories also fostered the authoritarian mindset of the right wing, since in this type of government power rests solely with the executive (the local commander), who is also the supreme legislator as well as the one appointing the judges - and he/she is not subject to the review of these courts.

In other words, military government (according to international law) is a regime without separation of powers, with solely one centre of authority. As the far right in Israel is seeking to take control of the military government for its own interests, it also operates in the reverse direction: this radical right wing introduces the rationale of military government, as a system of managing populations, into Israeli political life.

Since military government in the occupied territories has proved itself efficient over decades in serving the right, has been exercised by generations of Israeli soldiers, and is intimately familiar to the political elite in the country, it is almost natural that this rationale reshapes Israeli democracy from within.

Indeed, after winning a slim majority of four seats in parliament, the new coalition is seeking to carry out a revolution of sorts: to diminish Israel’s high court and the legal system generally.

It plans to introduce new legislation that would allow parliament to overcome judicial review with relative ease, and relegislate laws that that were struck down by the high court.

This will permit Israel’s parliament, the Knesset, to accept pieces of legislation that violate equality and the basic rights of Palestinian citizens, the LGBTQ community, reform and conservative Jews, and refugees and illegal immigrants, among others. (The politicisation of appointments to the bench, and of key positions in the civil administration, could come next.)

Moreover, young ultra-Orthodox men, who were on the path of becoming more integrated into the workforce and doing military service, like other Jewish Israelis, will reverse course. The state will now dramatically increase its funding to their yeshivas. The reforms in the judicial system and proposed new legislation could protect this blatant unfairness and inequality.

However, the emerging authoritarianism in Israel is odd. Most often, authoritarianism professes the need for a unitary locus of power for the sake of efficiency and the state’s ability to act. While adhering to this vision, the new coalition approaches the state’s administration as an assemblage of units, resources and powers, and devours them according to its sectorial needs.

Worse, some institutions of the state (including the office of attorney general, the police, the Ministry of Education and, at times, even the military) are presented as contaminated by “liberal ideas”, as opponents of “the people'', simply because they try to maintain a measure of civic-mindedness, operate according to the law, or adhere to the common good as broadly understood. 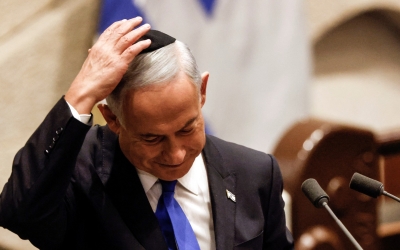 The examples of the chaos and breakdown of the Israeli state created by the new government are numerous. For example, departments in the Ministry of Education have been taken out of its control and put under ministers from various parties, each seeking to instil its worldview in the young. Without education aiming at some measure of shared identity and values, the rifts and divisions in Israeli society will increase over time.

The defence ministry remains under Likud’s control, but it has been divided as well, and will have two ministers. The minister of finance, the settler Bezalel Smotrich from the far-right Religious Zionism party (who did only partial military service himself), will also be a minister at the defence ministry. He will appoint the next military commanders responsible for governing the occupied territories, and will supervise them. This politicisation of the military government will likely facilitate the imposition of Israeli civilian law in Jewish settlements, and will give Smotrich control over critical policies of the military in the West Bank, as well as the construction of settlements there.

Perhaps the most alarming move in the restructuring of the state has been the appointment of Itamar Ben-Gvir, leader of the far-right Jewish Power party, as minister of national security responsible for the police. When I first heard about this appointment, walking in the woods with my earphones on, I began to laugh uncontrollably, frightening the birds. It was a bitter, desperate laugh, because it became clear to me that now everything is possible, the breakdown is complete, and that Netanyahu and his aides are deliberately flirting with disaster.

Ben-Gvir, a former follower of the racist extremist Rabbi Meir Kahane, has a long record of inciting Jewish violence towards Palestinians, and was convicted in the past both for supporting a terrorist organisation and for spurring racism.

More recently, the chief of police has accused him of being a major reason for the severe violence between Jewish and Palestinian citizens in mixed cities in May 2021, telling Netanyahu’s government at the time: “The person responsible for this intifada is Itamar Ben-Gvir.”

Now Ben-Gvir will be the boss of the same chief of police, only with vastly more powers than any minister of police before him. He will be able to influence the modus operandi of the police, and inflame relations between Jews and Palestinians further - only this time, acting from “inside” and using the resources of the state. He will even have a private army of sorts, since the fearsome border police will be under his direct control. All this is happening while the West Bank is on the verge of a new intifada.

Strangers in their own land

The 37th government of Israel embodies the worldview that power is the main means as well as goal of politics. Netanyahu, in particular, changed the political language in Israel, speaking ceaselessly in the past decade about Israel as one of the most powerful nations in the world - and of himself as a strong leader who brought the country to that status. Three years ago he declared, for example, that "Israel has never been stronger, not economically, not security-wise, not politically, and these things did not come by chance. They came because I am leading the country on the path of power."

Contemporaneously, however, Netanyahu hardly mentions basic ethical values to be sought in concert by citizens through their collective institutions, such as equality, liberty, justice, pluralism and more.

Paradoxically, Netanyahu seems somewhat pitiable these days, forced to agree to the unprecedented demands of the various coalition partners

Paradoxically, Netanyahu seems somewhat pitiable these days, forced to agree to the unprecedented demands of the various coalition partners, hoping perhaps that the new government and the impending legal reforms will allow him to shut down the trial he is facing now for corruption charges.

However, the new government is the first to truly materialise his deepest philosophy: rather than seeking to convince the political community of its ability to act according to high ethical (Jewish and liberal) standards, and to create the conditions in which human beings could become their best selves individually, this government will present a Jewish fist, albeit a fragmented one.

A lot of Israelis these days find themselves in an unfamiliar position: as a regime change takes place in their country, they realise they may soon be not simply an opposition from within, but possible critics of the entire state, its values and institutions. They are becoming strangers in the home they have helped to build, understanding that there is no point in trying to get back to how things were until now; the house was evidently built on untenable foundations. As detective Harry Bosch of the eponymous TV series says of solving murders: “Everybody counts, or nobody counts.” The same is true for the living - including all those inhabiting the land between the Jordan River and the Mediterranean Sea.

Analysis
Everything you need to know about Israel's radical regime change
Analysis
Israeli annexation is coming, just not in the way you expected
Analysis
Netanyahu asked the world to forget the occupation. Ben-Gvir wants it front and centre 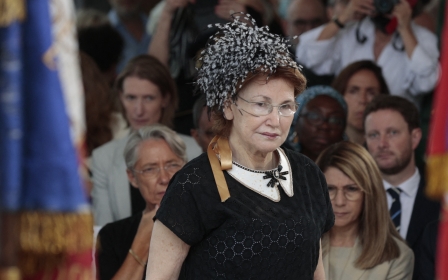 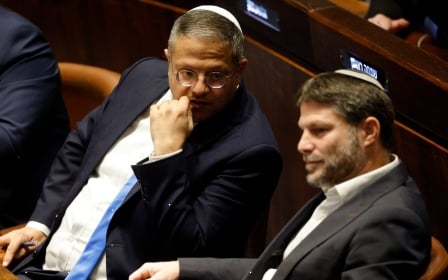 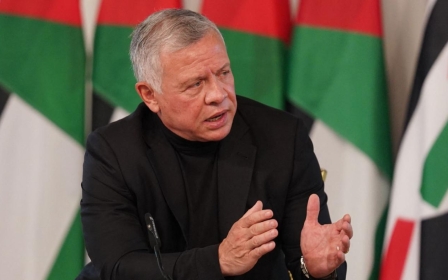