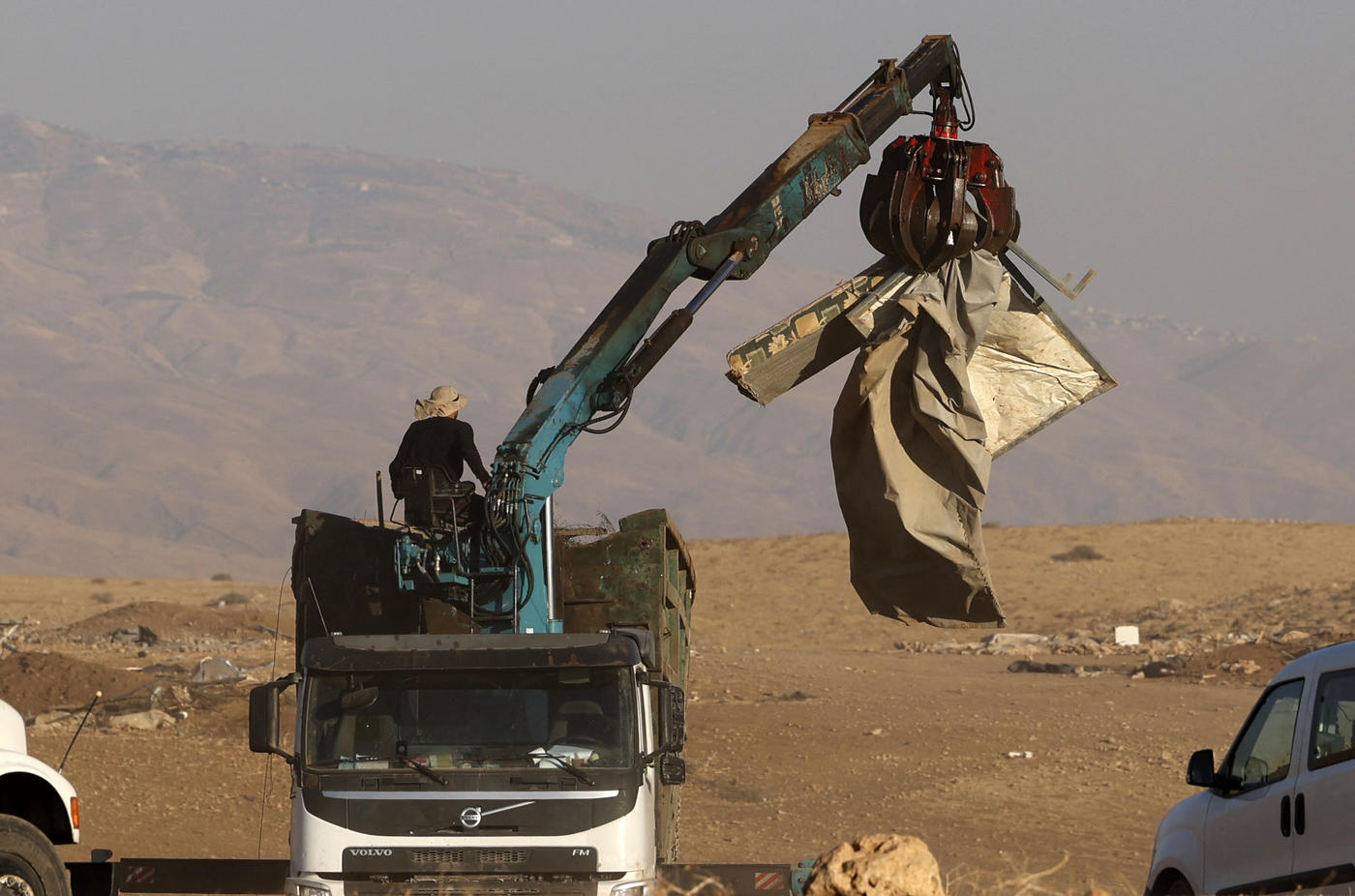 At around 9am local time, dozens of Israeli military jeeps, bulldozers, police vehicles and trucks raided the hamlet, located in the northern Jordan Valley in the occupied West Bank.

'They started destroying everything. Our homes, our livestock pens, water tanks, and anything they could see. There wasn’t a single thing in sight that they didn’t destroy'

“There were hundreds of soldiers, intelligence officials, civil administration officers, and police,” Abu Kbash said, adding that armed Israeli soldiers immediately put the area under siege, preventing anyone from coming in or out.

“They started destroying everything. Our homes, our livestock pens, water tanks, and anything they could see. There wasn’t a single thing in sight that they didn’t destroy,” the shepherd said.

According to locals, Israeli forces were stationed in the area until around 6pm, by which time they had levelled the village, and confiscated most of the villagers’ belongings.

“After the demolition they confiscated everything - solar panels, water tanks, even our gas tanks we use for cooking, and all of our food supplies, and the fodder for our livestock,” Abu Kbash said.

He added that Israeli forces even confiscated their families’ clothes, baby formula, and diapers for their children.

“Anything that could have helped us live, or give us life here, they confiscated it,” he said. “They took it all.”

‘They threw us out in the sun’

Khirbet Humsah is home to an estimated 74 Palestinians, including 41 children, who maintain a semi-nomadic way of life, living primarily in tents and tin structures, and raising livestock.

Wednesday’s demolition campaign marked the seventh time in less than a year that Israel has destroyed the hamlet. The first demolition was in November 2020, on the eve of the US elections, and in the midst of the cold winter storm.

Between November and February, Israeli forces destroyed the village five more times. On at least two occasions, B’tselem documented Israeli forces cutting down and uprooting trees in the area, affecting more than 3,000 trees in total.

So far in 2021, the Israeli authorities have demolished, seized or forced people to demolish at least 421 Palestinian-owned structures, including 130 funded by donors, displacing 592 people, including some 320 children across the West Bank, UNOCHA, the United Nations' humanitarian agency, reported.

'If you came here today and looked at the land, you would never know that there are people living here, and that there was a village here just 24 hours ago'

In the aftermath of the previous demolitions, dozens of Palestinian activists from the Jordan Valley and surrounding areas went to Khirbet Humsah and led efforts to help the villagers rebuild, providing them with new tents and shelters.

This time, however, that was made impossible by Israeli authorities. “They completely blocked off the area, and wouldn’t let any of us arrive at the village so we could help the people,” Ayman Ghraib, a local activist with the Popular Resistance Committees, told MEE.

“We tried to enter the area with food and water and supplies for new tents, but the soldiers prevented us from getting in,” he said, adding that many of the activists had to walk through the mountains to find other entry points to the village.

Palestinian journalists also reported not being able to access the village on Wednesday and Thursday in order to go cover the events in Humsah.

“By the time we were able to access the village it was late at night, and everything was gone,” Ghraib said. “If you came here today and looked at the land, you would never know that there are people living here, and that there was a village here just 24 hours ago.”

“They threw us out in the hot sun, it was more than 35 degrees yesterday, and they confiscated all our food and water,” Abu Kbash said. “The children were sitting in the sun for hours, with nothing to drink and no shelter.”

'This is a clear attempt at forcible transfer, which is a war crime under international law'

Abu Kbash noted that throughout the demolition campaign, Israeli soldiers and officials ate food and drank cold water that they had brought with them.

“They ate their food and were drinking ice cold water in front of us, and didn’t even offer anything to the children,” he said. “They saw the kids, terrified and sitting in the sun, and they just taunted them.”

“There was absolutely no humanity,” he said, adding that before the soldiers left, they dumped their leftover food, water, and trash on the ground in front of the villagers.

By Wednesday evening, after most of the structures had been demolished and loaded onto trucks, Abu Kbash said that Israeli forces began attempting to round up the villagers, and force them onto buses.

“They started threatening us, and telling us that they were going to arrest us all, including the women and children, if we didn’t get on the buses,” he said, adding that the villagers dispersed and ran up into the surrounding mountains in order to avoid being detained and bused out of their village.

“This is a clear attempt at forcible transfer, which is a war crime under international law,” Ghraib said, noting that Israel has previously attempted to forcibly move the residents of Khirbet Humsah to another area in the Jordan Valley.

‘This is ethnic cleansing’

While November 2020 marked the first time Khirbet Humsah was completely destroyed, the villagers, along with dozens of other Bedouin communities in the Jordan Valley, have been subject to harmful Israeli policies targeting their communities for decades.

In 1972, Israel declared the area around Khirbet Humsah a “military training” and “firing” zone, thus making it “illegal” for the residents to be living there. As a result, the residents are frequently subjected to demolition orders, as well as forcible evacuations from their homes during military training exercises.

'Israel is trying to commit another Nakba here in Khirbet Humsah'

According to UN documentation, approximately 5,000 Palestinians, living in 38 communities, reside in Israeli military firing zones. The majority of those communities are Bedouin or herding communities, many of which existed in their respective areas prior to being closed off by the Israeli military.

Over 80 percent of the communities living in military firing zones are located in either the Jordan Valley and Dead Sea area, or the south Hebron hills. Activists say that the designation of such zones as closed military areas is a tactic used by Israel to kick Palestinians out, and move Israelis in.

“The Jordan Valley is a strategic area for the Israelis. It houses the majority of Palestine’s water reserves, and is extremely fertile land,” Ghraib said. “Israel has been clear about its plans to annex this area, and the continued demolition campaign against Khirbet Humsah is part of that.”

“The restrictions on life in this area are only applied to Palestinians,” Ghraib added, pointing to the fact that there are a number of Israeli settlements located just a few kilometres away from the valley in which Khirbet Humsah sits.

“The settlers are given water, electricity, homes, and land to farm. But Palestinians aren’t even allowed to live in basic tents," he said. "This is nothing more than an attempt to forcibly expel these families, and ethnically cleanse Palestinians from this land.”

‘We will not leave’

As Harb Abu Kbash woke up on Thursday, he took his sheep out to graze, and stared at the empty land around him.

“What happened yesterday was really terrible,” he said. “It was devastating. Israel is trying to commit another Nakba here in Khirbet Humsah. They want to kick us out, and they are using all the means that they have to do so.” Despite threats from Israeli authorities to continue demolishing Khirbet Humsah until the residents leave the area and relocate, Abu Kbash says that he and the other families will not leave, no matter what.

“We will die here, but we won't leave this area,” he said. “Israel only has two options: they need to leave, or kill us here. There is no other option for us.”

Both Abu Kbash and Ghraib urged intervention from the international community, with Ghraib pointing to the fact that the bulldozers that demolished the homes in Khirbet Humsah were made by international companies like the US-based Caterpillar Inc.

“We are asking the free people of the world to support us and pressure their governments to sanction Israel over its crimes,” Ghraib said.

“These private companies that supply Israel with weapons and bulldozers are complicit in the dispossession of the Palestinian people, and must be held accountable. They need to be under more pressure to stop supporting Israel's crimes.”

“The world is complicit in what is happening to us and our families,” Abu Kbash said. “They need to stand up and do something.” 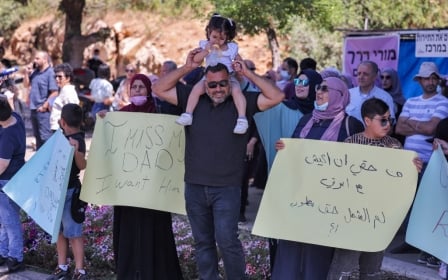