Cancer patient Musa al-Zein, 13, and his mother Shadia, photographed in a Jerusalem hospital. The family is from Gaza (MEE/Aseel Jundi)
By
Aseel Jundi
in
Jerusalem

Sitting at the bedside of her five-year-old son, who has leukemia, Mona al-Ghoul shifts her attention from Wassim as she tries to comfort him after a chemotherapy session, to her mobile screen as she absorbs the stream of news pouring in from Gaza.

For weeks, the 29-year-old mother has been dealing alone with her son’s illness at Augusta Victoria Hospital in Jerusalem, where pediatric cancer patients in Gaza are referred for treatment. Signs of stress and sadness can easily be seen on her face.

Patients and their families at the hospital are going through some of their most difficult days as they cope with their situation against the backdrop of Israel's assault on Gaza.

Long stays in Jerusalem's hospitals have always been difficult on families caring for their sick children. This time, the strain has been magnified by Israel's military campaign, which lasted for 11 days and left behind it widespread destruction, death and heartbreak. Families from Gaza have no immediate option to join their loved ones back home.

It took several months for Wassim’s diagnosis to be made, due to the scarcity of specialised medical equipment. When he was finally diagnosed with blood cancer in April, Mona took her son to Jerusalem for treatment.

Having suddenly left her home and family in Gaza, Mona had sought the psychological support offered by the hospital to deal with her situation. But as soon as she started feeling better, the onslaught on Gaza began, and with it came a new wave of fear and anxiety.

“My day and night are connected. My son Wassim struggles with his disease, and I struggle for him and for my husband and my three other children, the eldest is 12 and the youngest is nine, whom I left with him,” Mona told Middle East Eye. “At night, I walk across the hospital’s corridors alone, praying to God to protect my family.”

Mona’s fears became reality when Israeli air strikes partially destroyed her family home. “I was looking forward to Wassim and I going back to Gaza and reuniting with our family but now, after they bombed and destroyed my house, where am I going back to? Where would we live?”

This was the second time that the Ghoul family home had been destroyed. A lack of money and resources meant that it took the family many years to rebuild their home when it was destroyed in 2014. Mona’s husband and children are now staying with relatives, some of whom have also had homes destroyed in Israeli raids.

'At night, I walk across the hospital’s corridors alone, praying to God to protect my family'

Mona had wished she could have been in Gaza with her other children during the Israeli operation on the besieged coastal enclave, especially with her youngest son Zein, who suffers from a chronic kidney illness and anxiety attacks, which the bombardments aggravate.

Israel launched its bombing campaign on Gaza on 10 May after Hamas fired rockets into Israeli territory in response to Israeli attacks on al-Aqsa Mosque and the violent crackdown on Palestinians protesting the imminent forced expulsion of four families from their homes in the Sheikh Jarrah neighbourhood of occupied East Jerusalem.

A ceasefire brokered by Egypt took effect in the early hours of 21 May.

Mona breaks down crying as she thinks about her family. She composes herself as she comforts Wassim, who has not stopped crying since the interview began.

The situation was no better in the adjacent room, where 13-year-old Musa al-Zein from Gaza is being treated for his bone cancer, which was diagnosed in March.

'Dearest place in the world'

“When some of my siblings and relatives call me from Gaza and I hear them laughing I feel as if I were healed from my illness. I wish I could go back to my home in Gaza but everyone has left for safer areas because of the war,” Musa said in a tone well beyond his years.

He wells up as he tells MEE that three of his neighbours died in Israeli air strikes and that he wishes he could go back to a field in his neighbourhood where he, his cousins and other children played football every day.

“Gaza is the dearest place in the world to my heart, and I wish that the suffering that the people have endured from wars, diseases and blockades would end,” Musa says.

Sitting beside him is his mother Shadia, who left Gaza for the first time in her life two months ago to accompany her youngest child to Jerusalem for treatment. Since leaving the enclave, her family have had to abandon their home because of the air strikes. Shadia is unable to help them.

“When the war broke out I had lost hope that my family would come out alive because we live in a border area. When they stopped contacting us, I was overwhelmed with fear, but I hid it from Musa so that it wouldn’t affect his treatment,” Shadia said.

Shadia had left behind her husband and nine children, who were forced to leave their area at the start of the war. They don't know if they will be able to go home.

What Shadia knows for certain is that nothing in Gaza remains the same whenever a war is over.

In the department of internal medicine at Augusta Victoria, Arwa al-Sharif, a 17-year-old girl from Gaza, is receiving palliative care for her terminal cancer that has metastasised throughout her body.

Sitting by her side is her mother Asma, who receives visitors with a smile that hides years of pain from watching her daughter go through different stages of cancer and treatment courses. “There is no safe place in Gaza… I follow the news on my phone around the clock with a feeling of dread of seeing my house and family among the victims,” Asma says.

Arwa can hardly open her eyes. She asks her mother to call her brothers and check on them, then closes her eyes again but keeps listening closely to what her mother is saying. Asma says her daughter has been overcome with worry for their family in Gaza and how she longs to see them again despite her condition.

Mohammed Qubaja, head of the pediatric department's nursing staff, says that the hospital tends to double the psychological and social support to patients from Gaza under all circumstances because they are completely separated from their families during their stay in Jerusalem for extended periods of treatment.

Qubaja says that this type of separation leads to longterm anxiety and tension in both patients and accompanying family members, making the role of social services vital.

During times of war, the situation gets more complicated, according to Quabaja, as the mental and emotional state of patients and their families worsens. He described Mona’s state when she learned about the bombing of her house as catastrophic, which had necessitated medical, psychological and social intervention by the hospital to enable her to cope with supporting her child.

'There is no safe place in Gaza. I follow the news on my phone around the clock with a feeling of dread'

Shushan Efrangieh, head of the psychosocial unit at Augusta Victoria, says it is very important for the staff to show Gazan patients and those who couldn’t cross back into the Gaza because of the Israeli bombing that they stand by them and empathise with their separation from their families.

With that goal in mind, the unit organises daily recreation and support sessions for these families with the aim of navigating this sensitive period with as little damage as possible. According to Efrangieh, the body’s ability to accept medical treatment weakens when patients are in a poor psychological state.

“I assure them on a daily basis that their struggle against the illness is no less important than the struggle of their families in Gaza under the war, and that it is important to overcome both battles,” Efrangieh says.

According to the hospital’s data, Augusta Victoria receives around 6,000 patients annually, 4,000 of whom are cancer patients, with 50 percent coming from the Gaza Strip. 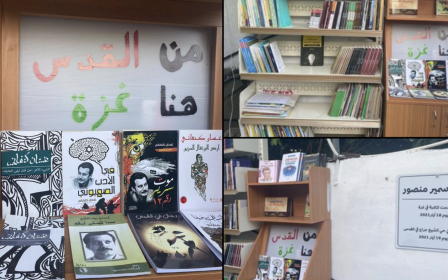 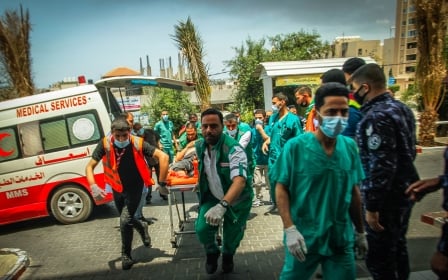