How a map revealed fault lines of the Palestine solidarity movement

After backlash from pro-Israel groups, the BDS movement distanced itself from Boston-based Mapping Project, a move opposed by several Palestinian activist groups 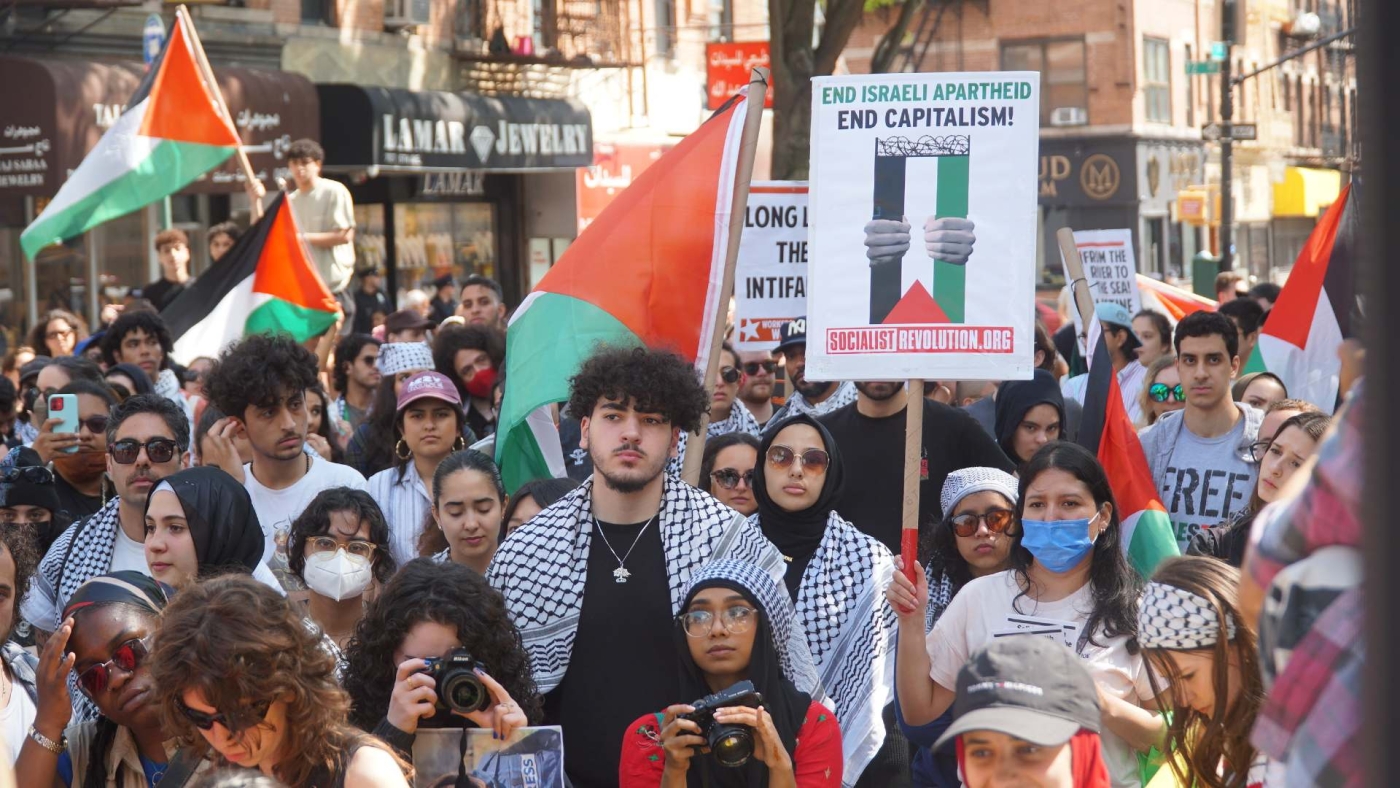 On 3 June, a group of Boston-based activists released a map of Massachusetts. On that map, 483 entities were listed as having connections and ties to the "colonisation of Palestine" and pro-Israel groups.

The Mapping Project describes itself as an attempt to help understanding of the links of local institutions in the US to the occupation of the Palestinian territories, and was seen by local Palestinian activist circles as a model of anti-Zionist organising.

Yet, after an attack on the project by pro-Israel groups who called it antisemitic led to a call for a federal probe into the initiative, the Palestinian-led Boycott, Divestment, and Sanctions (BDS) national committee - a leading voice in the Palestinian solidarity movement - released a statement distancing itself from the project.

- Nerdeen Kiswani, founder of Within Our Lifetime

The BDS National Committee (BNC) said in a statement that it "has no connection to and does not endorse the Mapping Project in Boston, Massachusetts," and further called on any organisations affiliated with BDS to remove ties with the Mapping Project.

The move was criticised by a number of Palestinian groups, which saw it as undermining Palestinian solidarity at a time when attacks were being launched by pro-Israel and Zionist groups.

It also laid bare a division within the larger Palestinian movement, which organisers say the BNC has contributed to by trying to police the actions of other groups.

In response to the BNC's statement and the wave of criticism the mapping project received, a group of 15 pro-Palestinian entities led by the Palestinian Youth Movement (PYM) made their own statement showing their support for the Boston initiative, in which they clearly laid out their position: "No one in our movement has a monopoly on movement tactics, including BDS."

Yara Shoufani, a member of the PYM, told MEE: "The attacks on the project are an attempt to detract from its content, which highlights the relationship between Zionism, policing, and imperialism.

"Understanding these relationships is essential to building strong cross-movement connections. These sorts of popular education tools are essential for our resistance and should be uplifted."

Nerdeen Kiswani, a Palestinian activist and founder of the organisation Within Our Lifetime, said that she was disappointed but not surprised by the BNC's statement, noting that it has previously been guilty of "undermining Palestinian organisations that uplift other forms of Palestinian resistance by all means necessary".

"There is a long history of the BNC kind of trying to force the Palestine movement in their sort of liberal approach," Kiswani told Middle East Eye.

Some activists say that while the BNC has made great strides in helping people around the world recognise the cause of Palestinian rights, its focus on boycotts and sanctions falls short of fully addressing the full extent of Israel's occupation.

The BDS movement is a Palestinian-led initiative that encourages individuals, nations and organisations to censure Israel's consistent violations of international law and human rights through various boycotts.

It has been one of the most successful and recognised organisations and movements on Palestinian solidarity around the world. Starting as a small movement scattered across university campuses, it has now reached the halls of US Congress, where congresswomen Rashida Tlaib and Ilhan Omar are its vocal advocates.

Despite this success, Palestinian activism is not a monolith and there are a number of different approaches to organising. The BNC, according to activists, has a history of trying to control the actions of other groups, and last week's statement is not the first time that it has policed other groups.

In 2015, Within Our Lifetime, which then went by the New York City chapter of Students for Justice in Palestine, published a paper that laid out how the conversation around BDS could be expanded to include other forms of organising that do more to confront Zionism.

The group said that it embraces BDS, but at the same time argues that more could be done to advocate for the liberation of Palestinian land that is occupied by Israel.

In response, the BNC issued a scathing rebuke of the organisation, calling it "entirely inaccurate, uninformed, poorly researched, and damaging". 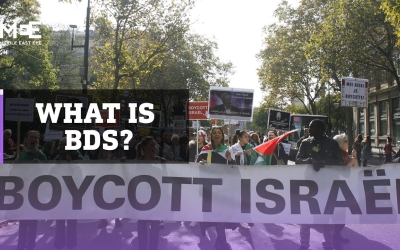 What is the BDS movement?
Read More »

Several groups, including a Gaza-based Palestinian group that originally signed the BNC's statement, came out in support of WOL's paper.

A few years later, activists say the BNC again moved to undermine them over Congressman Jamaal Bowman's membership in the Democratic Socialists of America (DSA).

The DSA's BDS and Palestine Solidarity Working Group in November 2021 issued a statement calling for the expulsion of Bowman, after he voted "yes" to sending Israel $1bn in funding for the Iron Dome missile system and also visited Israel on a trip sponsored by J Street, a liberal Zionist group.

The DSA's National Political Committee kept Bowman as a member, and then in March this year moved to de-charter the working group. Around this time, the BNC released a statement saying that politicians who visit Israel on trips sponsored by groups including J Street and AIPAC "cross our nonviolent Palestinian BDS picket line".

However, the statement, which made no reference to Bowman, added that the BNC upholds "context-sensitivity" and that its partners are best suited to "decide their objectives and strategies according to their context's nuances and political particularities".

The DSA's BDS and Palestine Solidarity Working Group told MEE it fully supports the Mapping Project, and that it had a strong connection with BDS Boston, a BDS chapter that had supported the Mapping Project when it was released but has since distanced itself as a result of the BNC's intervention.

"The Mapping Project was uplifted by Palestinian grassroots formations every step of the way – from its development to its initial release to the current manufactured saga. Thus, everything – from the principles and strategy of the project, to the organisers and formations driving and uplifting it – aligns with our group's strategy and vision."

"Most Palestinian organisers and organisations that I know haven't focused on this as much because we don't want to undermine the BNC or the Palestine movement as a whole," Kiswani told MEE.

"The BNC are the ones undermining the Mapping Project, and in a moment when they're being attacked by Zionist organisations no less."

Despite the backlash from pro-Israel groups, US lawmakers and even the BDS movement, the Mapping Project still appears to have support from a number of Palestinian organisations, and activists said that it has inspired others to pursue similar efforts across the country.

"The activists and organisers who made the project know that, and they know how much time and labour their hard, admirable work will save fellow organisers building campaigns," the DSA's BDS and Palestine Solidarity Working Group told MEE.

"This will very likely accelerate BDS campaigns in Massachusetts, and we hope to see more projects like it elsewhere."

While many have continued to oppose the BNC's approach to isolating the Mapping Project, activists told MEE that the disagreements do not indicate any sort of serious rift between groups.

"The Palestinian movement remains united despite our disagreements on strategy and tactic," Shoufani said.

"We believe that our struggle against Zionist colonialism begins in our local contexts, and though we reach those conclusions from different lenses, we are united in that approach."

Kiswani also stressed that the movement is still united, and that having different approaches ultimately helps the larger campaign for Palestine.

"We all have a different part to play in the movement, and we supplement each other. Where it becomes a problem is trying to force the movement to fit into a liberal vision that abandons support for Palestinian resistance." 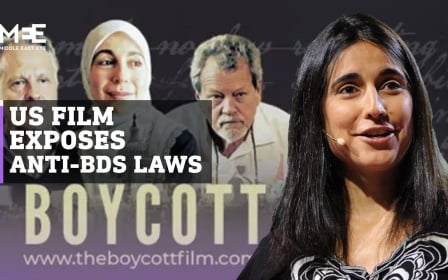 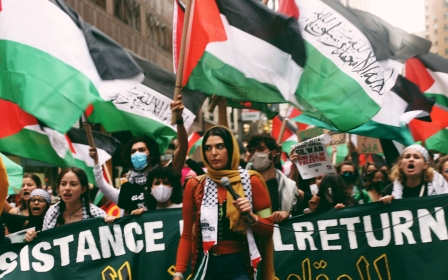 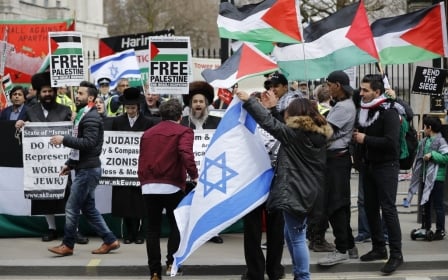