Despite Israeli provocations and crackdowns, Palestinians remain determined to enjoy Ramadan at the popular landmark on their own terms 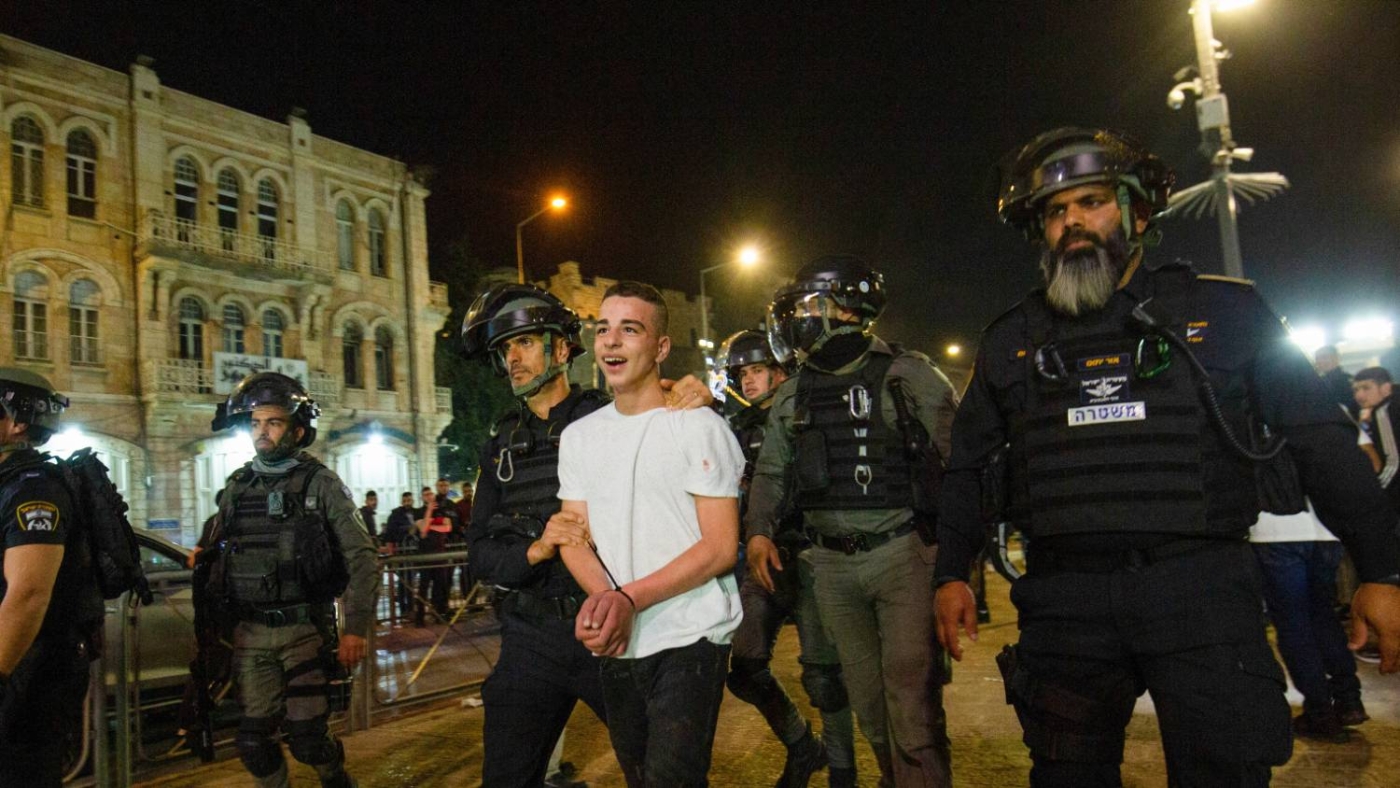 A juice vendor cries out advertising his products, "fresh and cold, come by and give it a try!"

The smell of grilled corn wafts by from the neighbouring stalls, and the balloon seller walks through the rows of people as children chase after him.

​Countless Palestinian street vendors and merchants fill up the plaza just outside Damascus Gate in occupied East Jerusalem, as hundreds flock to the Old City gateway in Ramadan for nighttime recreation after breaking their fast.

Congregations near the gate, known to Palestinians as Bab al-Amoud, have become almost second nature after Ramadan night prayer in nearby al-Aqsa Mosque. The youth are out in full force, drinking hot tea and echoing choruses for Palestine and Jerusalem, and singing the praises of the Prophet Muhammad. 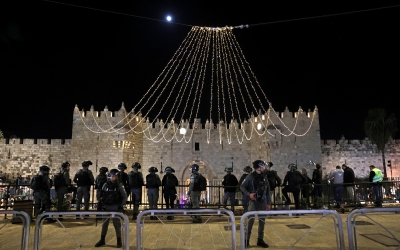 This unique sight, which comes around once a year during the holy month, is marred by the metal barriers erected by the Israeli forces on each side of the gate's entrance. The barriers prevent people from sitting and moving easily in the plaza, while heavily armed Israeli forces patrol the streets, replacing the usual cheer with a sense of unease.

And for the second year in a row, violent Israeli assaults have continued.

Since the start of Ramadan, Israeli forces have arrested at least 40 Palestinians gathering outside the gate, including minors.

Dozens have been injured as Israeli forces used batons to strike passers-by, and tear gas, stun grenades, and mounted police to disperse the crowds.

An additional 3,000 police personnel were deployed around the Old City, including around Al-Aqsa Mosque and the Damascus Gate, just ahead of Ramadan in yet another sign of increased securitisation.

The scene is at times reminiscent of last year when Israel put up barricades limiting Palestinian access to the plaza, which sparked widespread protests and subsequent violent Israeli crackdowns. Eventually, Israel removed the barricades.

This year, the popular social landmark has seen less violence as fear of escalations elsewhere bears on everyone's minds. And the occasional brief crackdown by Israeli forces is interrupted by another moment of calm, as the constant game of cat-and-mouse is ended with yet another Palestinian chant and more children chasing after the balloon seller.

Ibrahim al-Sinjilawi, a Jerusalem-based journalist, visits the square daily as a resident of the Old City, and regards the Damascus Gate as a regular passage on his way home.

He tells MEE the Gate has been a place for meeting friends and family during Ramadan ever since he was a child. It is always bustling with passers-by and frequented by youth that often spontaneously play various sports, most notably parkour.

The Gate is particularly notable for its adornments and architectural build, towering over the clashes that have taken place ever since the first day of Ramadan this year.

Sinjilawi affirms that the Palestinian presence in the area and the Ramadan festivities provoked the Israeli government to send more police reinforcements.

"Palestinians are facing off against armed soldiers seething with rage and extremism. They are afraid of a spontaneous gathering of Palestinians because the battle over Damascus Gate is a battle over identity," he says.

'Palestinians are facing off against armed soldiers seething with rage and extremism,'

But the arbitrary policies of the police may lead to the outbreak of clashes throughout the entire month, Sinjilawi argues.

"The soldiers provoke the youth by stopping them for random and invasive body searches, which increases their resentment and anger at the transformation of Damascus Gate into a military checkpoint under closure," he says.

Sinjilawi believes that the Israelis want to damage the economic activity that takes place around the holy month, and by extension to minimise the number of prayers in the Aqsa Mosque.

A young Jerusalemite, Iyad al-Tawil, considers Damascus Gate one of the few remaining recreational spaces for him and his friend.

"Drinking our morning coffee outside of Damascus Gate has become a daily ritual for Jerusalemites," he said. "If the people of Jerusalem lose this place, they will lose a vital national and social space in the city. This is why it’s so important to keep going there."

Al-Tawil added that he feels alien whenever he walks by New Gate, but continues to feel at home whenever he passes by Damascus Gate.

"We are in need of joy and spiritual connection during Ramadan, but the occupation wants to set the whole city on fire instead," he said.

Ziyad Bheis, a researcher on Jerusalem, told MEE that the Israelis see Damascus Gate as a battleground over the sovereignty of Jerusalem, and as an arena in which they may impose their control over the city and erase its Arab Islamic and Christian identity.

"Damascus Gate has also become something of a defeat complex for the occupation, which has tried to regain the stature and deterrence capacity that it lost during the previous year’s Ramadan in the eyes of the Jerusalem youth."

To that end, the Israeli authorities erected metal barriers to prevent congregations, while establishing a temporary police station in the area and reinforcing the garrisons it built in 2017 by setting up new searchlights and increasing the number of police personnel.

But the measures did not stop there. Foreign affairs minister Yair Lapid made a provocative visit to the area and declared the Damascus Gate to be a battleground for Israeli sovereignty. This drew criticism and censure from defense minister Benny Gantz, as it amounted to the unauthorised disclosure of a blatantly political goal behind the repressive measures at the Gate, according to Bheis.

"In light of this, the Palestinian battle for Damascus Gate has become a struggle for our identity and our very existence. We must formulate specific goals to remove these metal barriers and to remove the temporary police station," the researcher commented.

As for the scenarios expected to play out in Jerusalem in the coming days, several points of friction are possible, especially since the third week of Ramadan coincides with Jewish Passover.

This may even lead to a widening of the scope of confrontation to involve Gaza, as it did in May of last year. In addition, comments Bheis, the years 2022 and 2023 will see a continued overlap in the Hebrew and Islamic Hijri calendars.

This overlap includes the coinciding of the third week of Ramadan with all seven days of Passover, as well as the overlap of Purim with 15 Sha’ban (the Muslim day of forgiveness), the overlap of the Destruction of Temple with Ashura, and the overlap of Yom Kippur, with al-Mawlid (the Prophet Muhammad’s birthday). These overlaps may make for a tumultuous and volatile two calendar years. 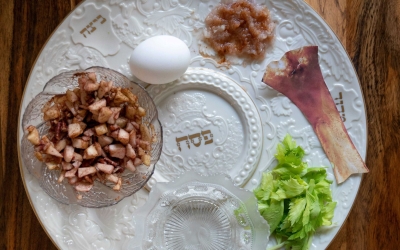 The extremist rightwing Temple Mount Faithful (TMF) group, which aims to carry out a religious ethnic cleansing of the al-Aqsa Mosque and to rebuild the Temple Mount in its place, is the spearhead of Jewish extremism in the city.

Viewing Passover as one of the three most important Jewish holidays, the TMF aim to break their fast inside Al-Aqsa, to host a communal reading of the Book of Exodus there, and bring the Passover sacrifice into the Mosque.

Bheis added that Jewish sacrificial practices historically receded over time due to the destruction of the Temple, which was the centre of these religious practices.

According to Toraic pronouncements, therefore, the revival of these religious rites means that the Israeli right-wing wants to rebuild the Temple over the Al-Aqsa Mosque, as a means of transforming the area into an exclusively Jewish site.

"These provocative moves, whether they be bringing the Passover sacrifice into al-Aqsa or to bring in its blood after the slaughter and using it to desecrate the Dome of the Rock, may lead to an inevitable eruption.

"The occupation is betting on being able to rein in these attempts, or at the very least to curb the Palestinian reaction to it. In reality, it is betting on no reaction, as opposed to working to actually prevent the crisis from unfolding in the first place." 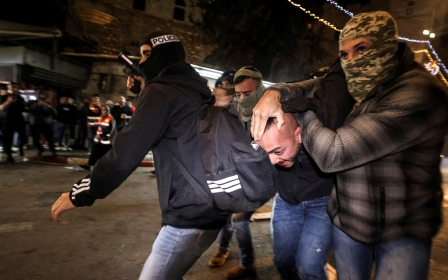 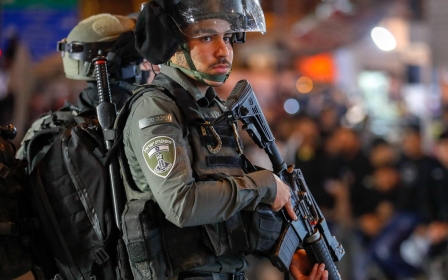 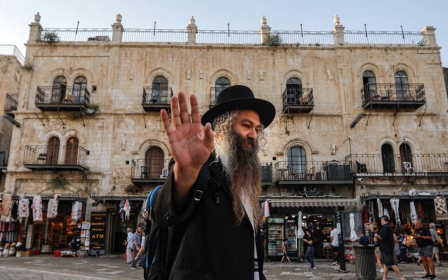