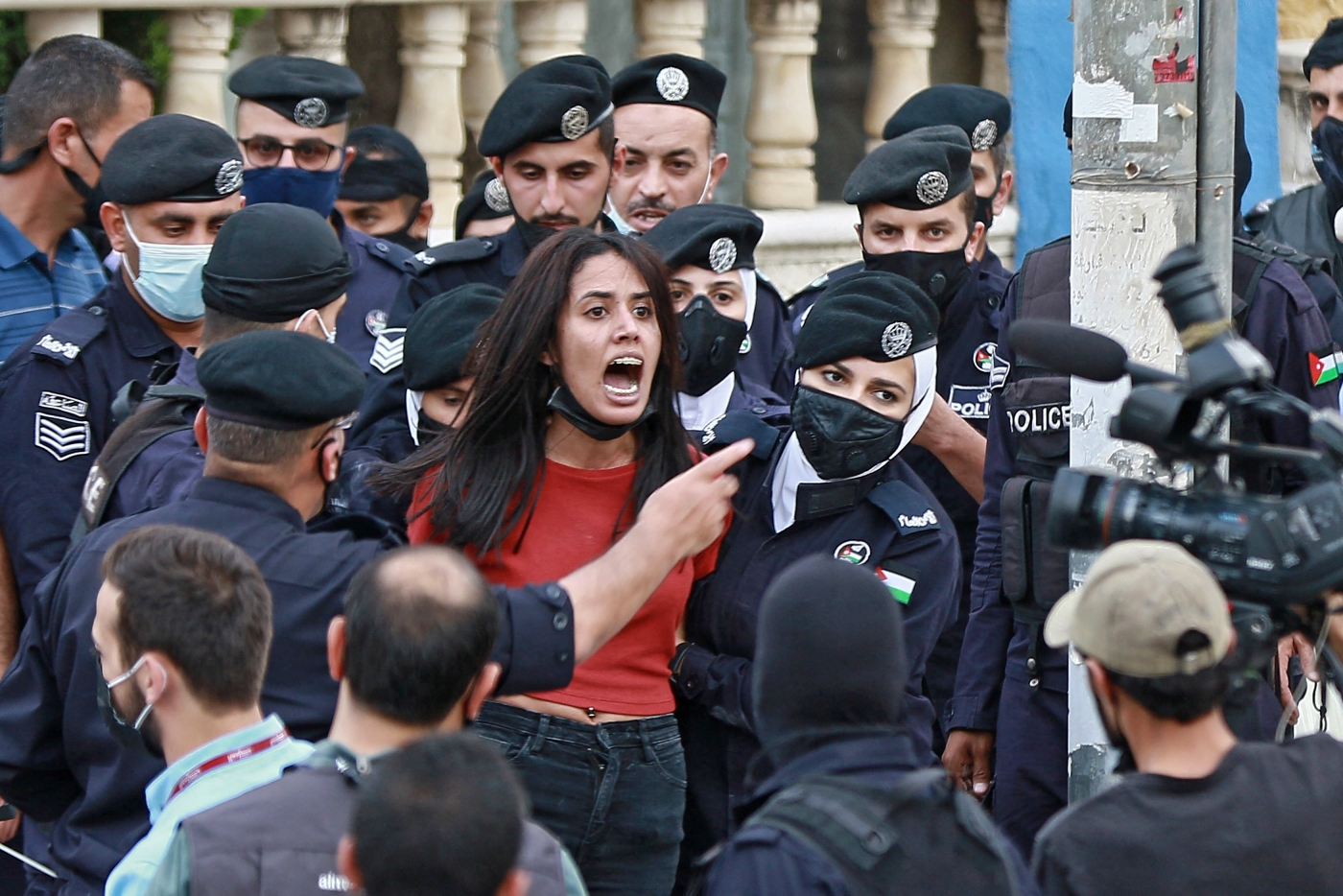 Jordanian security officials have allowed protesters to demonstrate near the Israeli embassy in Amman for the first time in years, without objecting or even using coronavirus measures as a pretext to repress the protest, according to a report by the London-based Al-Quds Al-Arabi.

Protesters from across the political spectrum gathered in the area housing the compound unplanned on Sunday afternoon in solidarity with Palestinian protesters in occupied East Jerusalem.

Those attending expressed their anger at the Israeli police’s response to protests at the Al-Aqsa Mosque and in the Sheikh Jarrah neighbourhood.

The newspaper said that the move by the Jordanians was a clear political message to Israel that the behaviour of settlers trying to appropriate property in occupied East Jerusalem and converge at the Al-Aqsa mosque was a cause of embarrassment and public pressure on the Jordanian government.

The Jordanian security forces allowed hundreds of activists to gather near the Kalouti Mosque, the neighbourhood in which the Israeli embassy is located. Protesters loudly chanted solidarity slogans with the Palestinians and the gatherings are expected to continue over the coming days.

Kuwaiti National Assembly Speaker Marzouq al-Ghanim submitted a request to the Arab Parliamentary Union to hold an emergency session as soon as possible to discuss "the violations committed by the Israeli occupation against the Noble Sanctuary of Jerusalem and the ethnic cleansing in the Sheikh Jarrah neighbourhood".

Representatives in the Kuwaiti National Assembly also proposed a law requiring the Kuwaiti government to end the use of the word "Israel" and "the Israeli occupation" in official statements issued by the Kuwaiti Ministry of Foreign Affairs and other government agencies and replace them with the term "Zionist entity".

The parliamentarians said it would reaffirm what they described as Kuwait’s uncompromising position against the Zionist occupation of Palestine.

The deputies called on the Ministry of Foreign Affairs and the Kuwaiti government to abide by a decision passed by the Kuwaiti parliament in 2010, which demanded the government withdraw from the Arab Peace Initiative that Kuwait agreed to in 2002. Under the proposal, the Israelis would normalise relations with all Arab countries in exchange for peace with the Palestinians.

Activists against the occupation of Palestine have criticised what they described as the negligence and bias of mainstream western media outlets over the events in Jerusalem, especially police violence against Palestinians at the Al-Aqsa Mosque, Arabi21 reported.

Most mainstream media outlets ignored Friday night's events, which lasted until dawn on Saturday and led to the wounding of hundreds of Palestinians after Israeli occupation forces stormed the Al-Aqsa Mosque, the website said.

Social media activists criticised US news agencies and newspapers, accusing them of bias and equating the victim and the oppressor.

Arabi21 also complained that rights groups, such as Human Rights Watch and Amnesty International did not comment on the events in Jerusalem and Al-Aqsa Mosque until Monday morning.

Over the past three days, the Palestine Red Crescent Society (PRCS) has recorded hundreds of injuries, including paramedics, journalists and children, in addition to confirming that the occupation forces deliberately targeted the eyes of Palestinian activists.

On Sunday, Algeria's government announced restrictions on weekly protests that have continued since the departure of former president Abdelaziz Bouteflika two years ago, in a move that critics see as an attempt to ban demonstrations, reported the Saudi newspaper Asharq Al-Awsat.

Tens of thousands of people have been taking part in weekly street rallies since February 2019, but they stopped with the spread of the coronavirus in early 2020.

Protesters resumed their gatherings earlier this year, restating their demands for political and economic reform, as well as the removal of the entire ruling elite.

The Algerian Ministry of Interior said: "It is necessary to underline the need to declare the names of those responsible for organising the march, the time of the start and end of the march, its course, and the slogans to be raised in accordance with what the law requires.”

Some protesters believe that the newly imposed restrictions are part of the government's attempt to end street marches definitively, Asharq Al-Awsat said.