Israeli forces reported to have used stun grenades, pepper spray and and rubber-coated bullets in the neighbourhood 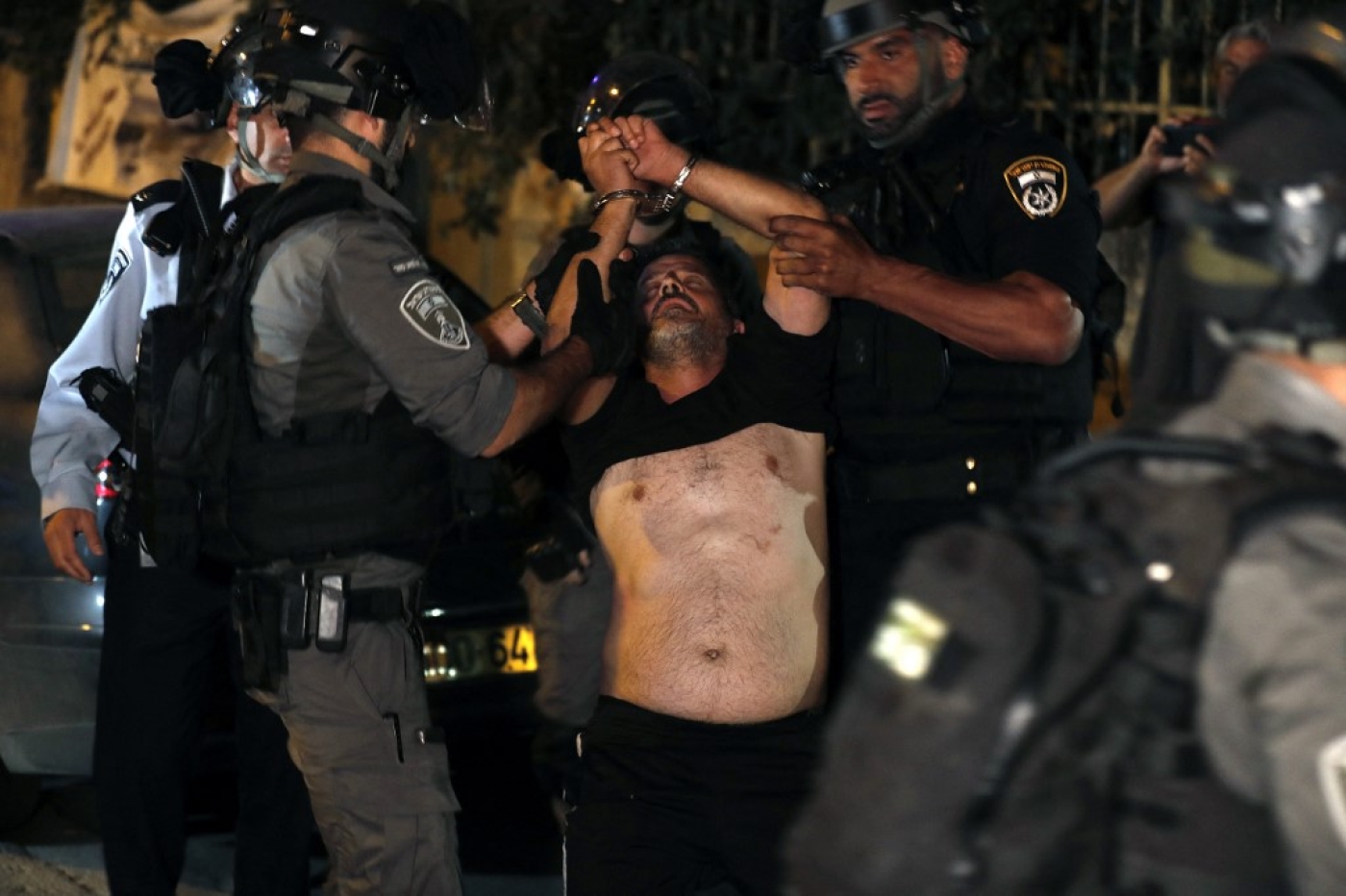 A Palestinian demonstrator is arrested by Israeli forces in the Sheikh Jarrah neighbourhood of occupied East Jerusalem, 21 June 2021 (AFP)
By
MEE staff

More than 20 Palestinians were injured on Monday evening during a raid by Israeli forces on the Sheikh Jarrah neighbourhood of occupied East Jerusalem.

Palestinian residents of Sheikh Jarrah are facing forcible expulsion from their homes to make way for Israeli settlers to take over their houses.

The area has become a focal point for protests and sit-in solidarity activities, drawing in Palestinian and anti-occupation Israeli and international activists in support of Sheikh Jarrah's residents. The Palestinian Red Crescent said on Monday that 21 people had been injured in the area, 13 from inhaling tear gas, three from being pepper-sprayed and two from being hit by rubber-coated metal bullets fired by Israeli forces.

The organisation said two people had sustained injuries from being beaten, while an elderly man was hospitalised following a head injury.

The Palestinian Red Crescent said that settlers in Sheikh Jarrah threw stones at one of their ambulances, while Israeli forces sprayed another ambulance with skunk water.

Israeli police said that a settler sustained an injury in her back from a stone, Haaretz reported.

Saleh Diab, a Palestinian activist, told the official Palestinian news agency Wafa that Israeli forces had arrested two Palestinians in Sheikh Jarrah, while firing stun grenades and rubber-coated bullets, and had assaulted residents with batons while storming the homes of the al-Kurd and al-Qasem families, who are facing imminent eviction.

In the occupied West Bank, Israeli forces arrested 35 Palestinians during raids on Monday evening and Tuesday morning. Such night raids of Palestinian towns and villages are carried out almost daily by Israeli forces and undercover units.

In Qarawat Bani Hassan village, in the north of the West Bank, 14 Palestinians, 12 of them belonging to the Marei family, were arrested during the raids, according to Wafa. Seven Palestinians in Jenin and two in Tulkarm were also detained, while in the Silwan neighbourhood, south of al-Aqsa Mosque in East Jerusalem, 10 Palestinians were arrested.

The arrests came as Israeli settlers on Monday broke into al-Aqsa Mosque, flanked by Israeli police.

Settlers entered the site from the Morrocan Gate, east of Al-Aqsa Mosque, which leads to the Western Wall piazza, where Israelis perform prayers.

The Jerusalem Islamic Waqf, the Palestinian religious trust that administers the site, said that the settlers had performed Jewish prayers opposite al-Rahmeh Gate, and the mosque of the Dome of the Rock, and had received a talk about the Third Jewish Temple.

Despite being forbidden from praying there, settlers regularly enter Al-Aqsa Mosque, aiming to strengthen the Jewish presence on the site, with some calling for the destruction of the Dome of the Rock mosque to build a Jewish temple in its place.