Sheikh Jarrah: Neighbourhood's resilient women say 'we will not leave' 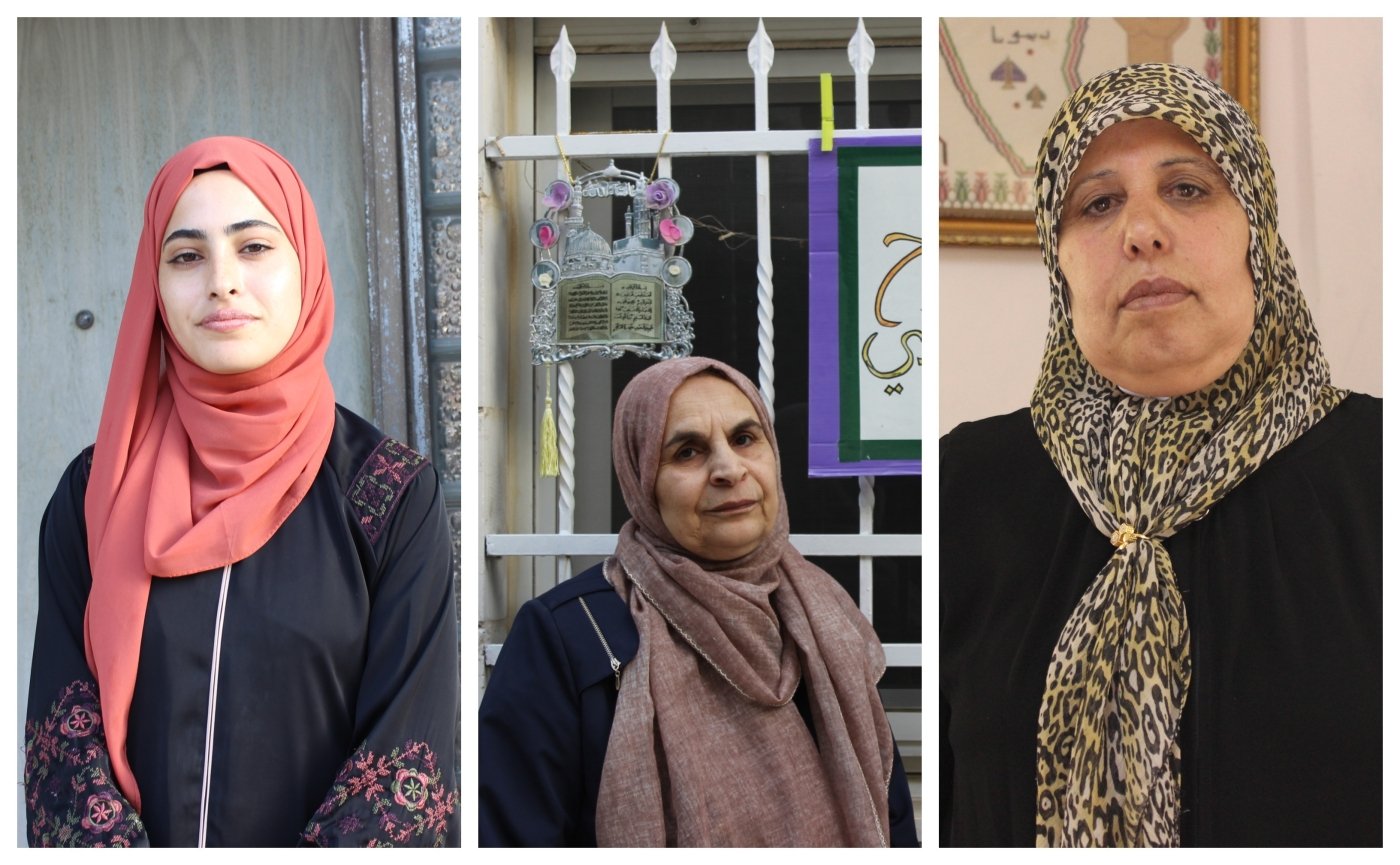 From behind the scenes to the forefront of the struggle, the women of Sheikh Jarrah are leading their own fights to save their neighbourhood from Israel’s plans to appropriate the land on which they and generations of their families were raised.

“I will take it upon myself to chain myself in my room should they raid our house to forcibly expel us,” says 23-year-old Muna al-Kurd, whose family has been living under the threat of displacement from their house in Karm al-Jaouni in Sheikh Jarrah, in occupied East Jerusalem.

“I will not leave my home in Sheikh Jarrah.”

While Palestinians are being attacked by Israeli forces and settlers for defending their rights to remain in their homes, Muna, the only journalist in the neighbourhood, can rarely be found at home.

Instead, she has made herself readily available to news outlets in order to document daily violations by Israeli settlers and occupation forces.

Middle East Eye met with Muna near her family home, where she shared her own story on how the women of Sheikh Jarrah have been spending their time amid the escalating tension, daily oppression of residents, and growing solidarity from activists, while they face eviction orders in favour of settlers.

Muna’s experience with Israeli harassment started in 2001, three years after she was born, when a section of her home was shuttered and its keys confiscated as a prelude to housing settlers.

'I go to sleep with my cloak and hijab in fear of any sudden raids as we are confronting gangs'
- Nuha Attieh, Sheikh Jarrah resident

“Some of the first stories I’ve heard and talked about were stories of evictions and expulsions that threatened some of the neighbourhood’s residents, until the threat knocked on our own doors,” Muna says.

“I grew up and matured around international law, war crimes, crimes against humanity terminologies, and other such expressions.”

The settlers have been living in the Kurds’ home since 2009.

Today, Muna finds herself repeating these same expressions on social media platforms and to news outlets, assuming the responsibility bestowed upon her as a journalist by the residents of Sheikh Jarrah to garner international support.

Muna has long advocated for Sheikh Jarrah. Two months ago, she launched an electronic campaign under the hashtag #SaveSheikhJarrah to highlight the plight of the neighbourhood’s people.

“I cannot overemphasise this resilience without saying that the neighbourhood’s women are grappling with both living under a state of incredible fear for their husbands and sons in the wake of the daily, brutal Israeli oppression, and dealing with the deep anxiety stemming from the fear of being imminently evicted from their homes,” she says.

'I have had a recurring nightmare for years, where I feel someone is trying to pull me out of my house by force, and I resist them'

“After breaking the Ramadan fast, women hasten to entertain the solidarity activists by offering them tea, coffee or cool melons to dampen the heat of the day, and then they rush to police the area once the activists depart,” Muna says with a smile hiding years of duress.

Muna's own fearlessness was on display when she tried to free her brother from the hands of Israeli special forces as they severely beat him. Her brother was eventually arrested a few days ago.

When asked about her fears, Muna says that talking about it was painful and could not be summed up in a few words.

“I was born and raised in Sheikh Jarrah and I cannot imagine myself living anywhere else,” she says.

“Sometimes I drift to sleep and suddenly wake up gasping for air.

“I have had a recurring nightmare for years, where I feel someone is trying to pull me out of my house by force, and I resist them.”

Muna reiterates that regardless of the daily peril surrounding her and her family since the settlers occupied half of their house, and the looming threat of being forcibly expelled from the remaining part, she would not feel safe anywhere else.

“Before my grandmother died, I didn’t have a room of my own and I used to sleep in the living room next to the window, where I would imagine a hand carrying a gun and shooting at me,” she said.

A history of displacement

In 1948, Muna’s father Nabil al-Kurd was forced out of his home in Haifa to Jerusalem by the Jewish militia during the Palestinian Nakba, or Catastrophe. His family was among 28 families that Jordan, in cooperation with the UN refugee agency, UNRWA, decided to resettle in Jerusalem in 1956 in exchange for giving up their rights as refugees.

'I got married in this house and I wish I could die here. Every single piece within these walls and around it means a lot to me'
- Salwa Skafi, Sheikh Jarrah resident

These families were selected and provided with housing units built by the Jordanian government for three years, after which the ownership of the properties would automatically become theirs.

However, after the occupation of Jerusalem in 1967, with the eastern part of the city coming under Israeli control, the inhabitants of Sheikh Jarrah district were surprised when two Jewish committees registered their ownership of the 18-dunam land at the Land Department in 1972.

Consequently, dozens of judicial cases were raised in Israeli courts, as the 28 nuclear Palestinian families expanded and the number of residents facing eviction in favour of settlers rose to 500, including 111 children.

In 2001, as his own family grew, Nabil completed the construction of an extension to his house. However, four days before the family could move in, the Israeli occupation authorities confiscated the keys to the extension.

In 2009, Israeli settlers moved in and occupied the house, only to turn the life of the Kurd family to hell through relentless harassment.

Now in his seventies, Nabil and three other families in Sheikh Jarrah are waiting for Israel’s Supreme Court to reach a verdict in the eviction case against them. The court had postponed its decision last week as tensions escalated.

On the road northward from the Kurd family home to the Skafi family home, settler posts can be seen adjacent to the house of Umm Kamel al-Kurd, which settlers took over by force in 2008.

On the iron gate of the Skafi home, one is greeted with the plaque engraved with “we will never leave our land” in English. Sixty-two-year-old Salwa Skafi, the woman of the house, has lived there since 1976.

“I gave birth to all my sons and daughters here, and my grandchildren were born here too,” Salwa tells MEE.

“Whenever it occurs to me that I might be expelled from this house I feel a lump in my throat.

“We no longer enjoy a calm sleep, and we’re living under immense duress especially during times of Israeli judicial deliberations, which I’ve been keen to attend lately.”

Salwa speaks about the extent of her worry for her sons and ailing husband in case of eviction. She then recalled Umm Kamel’s husband who had suffered from a cerebral stroke and died within a month of their forced eviction.

“I got married in this house and I wish I could die here. Every single piece within these walls and around it means a lot to me,” she says.

“Sometimes I think of uprooting the trees in the yard of my house, lest the settlers enjoy its fruits.

“In a couple of months the kaki persimmon tree will ripen and everyday I wonder, who is going to eat the fruits this year, us or the settlers?”

Salwa describes a general state of frustration prevailing among women in the neighbourhood, facing a harsh destiny and a vague future if evictions are carried out.

Nuha Attieh, a 59-year-old nurse who has been living in Karm al-Jaouni in Sheikh Jarrah since her marriage in 1988, says that ever since the first family was evicted from the neighbourhood in 2008, she has never felt safe.

This Ramadan, women’s responsibilities have turned upside down. Nuha is no longer dedicated to preparing the breaking-fast meal for her family in the evening. Instead she feels more responsible towards activists and rushes to their aid when the need arises. She also looks after them by offering them tea, coffee and cookies to make them feel at home.

The trauma of witnessing Israeli forces raiding their neighbours’ home in the middle of the night 13 years ago has only served to amplify Nuha’s own feeling of insecurity.

“I witnessed the doors of our neighbours, Al-Gawi family, being shattered during a pitch-black night, the women thrown out in their night garments and forcibly evicted from their home,” Nuha tells MEE.

“This scene never leaves my imagination. I remember grabbing some clothes from my house and giving them to the women.

“Today, in the wake of the tension that the neighbourhood is living under, I go to sleep with my cloak and hijab in fear of any sudden raids as we are confronting gangs.”