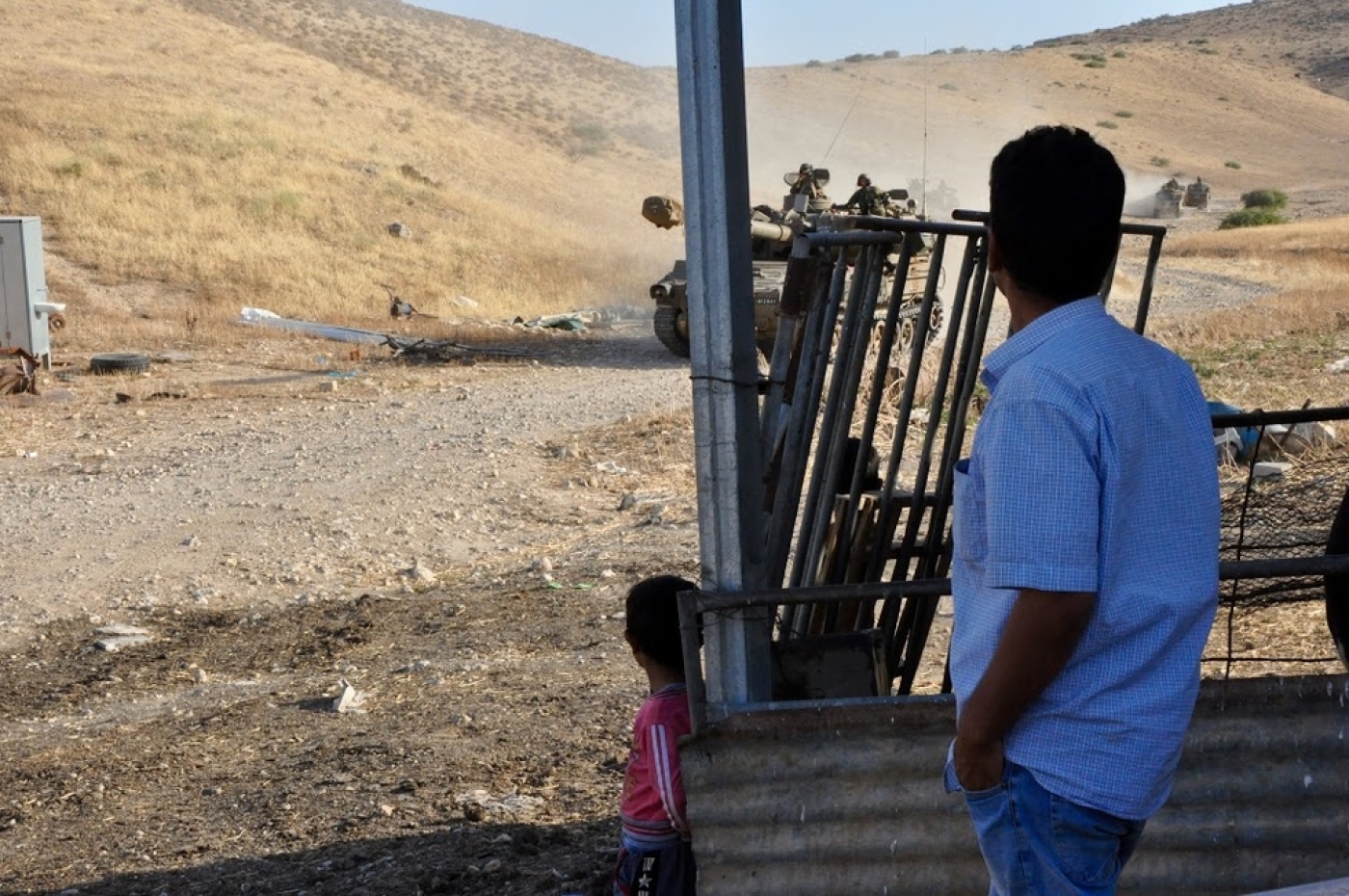 The mother of seven sits on a plastic chair against the outside wall of her small house in the afternoon shade, gazing towards dozens of heavily armoured tanks below which arrived in her community of Ibziq in the northernmost tip of the Jordan Valley at 1am on Monday and stayed there until Wednesday.

“They’re passing through the chickpeas again,” Salma said, watching the tanks zig­zag across her now-destroyed farmland, which comprised of a patchwork of growing crops and dry dusty squares that had already been harvested.

Clouds of dust were left behind as tanks blew through the stacks of hay, laid out across the fields. Her family’s livestock was left in its pens as the military drills charged across the fields where they ­usually roam.

According to residents, 42 Palestinian families from the herding communities of Khirbet al­-Maleh, Hamama, and Ras al­-Ahmar were ordered to evacuate their homes to make way for Israeli drills that started early on Monday and went on into Wednesday.

Drills like these last year burned and destroyed swathes of farmland, crippling livelihoods and access to sustenance for hundreds of Palestinians.

The communities are located in the northern area of the Jordan Valley, most of which is in Area C under full Israeli military control. Some 6,200 Palestinians in 38 herding communities in the area live in Israeli-designated “firing zones,” according to UN figures. Firing zones make up  46 percent of the area.

Palestinians are formally prohibited from living in these zones without permission from the Israeli authorities, which is rarely granted. These declarations have had a serious humanitarian impact on Palestinian civilians and dramatically reduced the land available to them for residential and livelihood uses.

An Israeli army spokesperson confirmed that Artillery Corps carried out exercises this week, adding that areas of the Jordan Valley were marked as firing zones in the 1970s “due to security requirements for training areas in the region”.

Mahmoud, a resident in the Hamamat al­-Maleh herding community near Ibziq a town at the northernmost tip of the valley, told MEE his family was kept up at night by artillery flying over their village.

While no one in the community was forced to evacuate the area, Mahmoud said the forces were stationed nearby, firing artillery over their homes before explosions were heard in the distance.

“We didn’t sleep last night...the children were scared. If we try to do anything [about the drills], like in court, the Israelis will just say: ‘This is a closed military zone, you don’t have the right to say anything about what we’re doing here’.”

Driving through the Jordan Valley, one can pick out locations of Palestinian herding communities almost solely by large concrete blocks boasting their designation as “firing zones”.

While the army spokesperson told MEE that firing zones “were not inhabited” at the time of their designation and that Palestinians have “illegally inhabited” the zones over the past 20 years, Israeli organisation Kerem Navot that focuses on land surveys reported that at least one area of the Jordan Valley was inhabited before it was deemed a firing zone.

The group also noted that Israel’s definition of “permanent dwellings” comes in conflict with herding communities who have long settled in the Jordan Valley, but remain tied to a “mother village” where relatives live.

In response to official state line, Israeli rights group B’Tselem in a 2015 investigation said military zones “have been systematically used” in an effort to “reduce Palestinian presence in Area C,” noting that the military had stepped up training in the Jordan Valley over the previous three years.

A UN Office for the Coordination of Humanitarian Affairs spokesperson said there were between 31 and 38 instances annually of temporary displacement due to military exercises in the Jordan Valley between 2013 and 2015. The number was nearly double what was seen in previous years.

Israel’s civil administration told MEE that evacuations this week were carried out “in order to protect the lives” of those living in the firing zones.

However, Palestinian residents of the Jordan Valley find it difficult to believe Israel is looking out for their best interests.

Amid a slew of discriminatory policies put in place since Israel occupied the west Bank in 1967, Palestinians are forbidden access to some 85.2 percent of the entire Jordan Valley, where they cannot build, herd, or often go about their daily routine unhindered.

Back in Ibziq, Salma points to nearby piles of stone and debris that lay afoot a cluster of olive trees where two homes used to stand.

“Last year they were having military exercises just like this...they came up and demolished the homes, without issuing any demolition order or anything,” Salma said.

Forty-­five percent of demolitions of Palestinian structures take place inside firing zones while illegal Israeli settlements in these same zones rarely face demolition, according to the UN.

Demolitions skyrocketed this year, with the UN warning that Jordan Valley villages were at risk of forcible transfer.

Discriminatory practices also come into play with water allocation. While the Jordan Valley has more natural water sources than anywhere else in the occupied West Bank, the majority are allocated for Israeli agricultural use and illegal settlements, many of which are inhabited by Israeli settlers relocated from settlements in Gaza in 2005.

US support of militarisation

This week’s military drills mark just one aspect of Israel’s ongoing militarisation of the Jordan Valley ­and subsequent depopulation of Palestinians from the area, in what analysts and rights groups have argued is de facto annexation.

Israel’s foreign ministry spokesman Emmanuel Nahshon did not confirm that Israel plans to annex the Jordan Valley, but told MEE: “What we do stress is that that Jordan Valley plays an important role in the security of the state of Israel,” citing past threats from neighbouring armies and the necessity for Israeli military presence.

Nahshon added that the old threat of “regular armies” like Jordan had since been replaced with “potentially the danger of terror organisations like ISIS [Islamic State] and al-Qaeda...We don’t want to be in a situation where the Jordan Valley is a passageway for terrorist groups.”

"Of course the Israelis will not admit to annexation,” said political scientist Denise DeGarmo of Southern Illinois University Edwardsville in response to the minister.

“But if you look how much land they have confiscated for the purpose of closed military zones, and you see how the land is transformed so it can no longer be used for citizens, there is only one thing going on ­- annexation,” DeGarmo told MEE.

DeGarmo said that successive Israeli governments, which he insists have all been pushing annexation policies, could only have done this with US support even though Washington’s official line is that Israeli occupation of the Palestinian territories is illegal under international law.

Citing the some $70bn in military aid given by the US to Israel since 1949, DeGarmo told MEE the strategic importance of the Jordan Valley in particular has led the US to invest in ballistic missile sites throughout the area as well as financially aid Israel’s military activity ­there, allegedly including drills like those carried out this week.

For Mahmoud, discriminatory practices and increasing execution of military exercises in the Jordan Valley’s Palestinian herding communities marks a clear message: “Why are they doing this? [...] They just want to transfer us all out of this area.”

All names of Palestinian residents have been changed for their security.