More than 1,000 protesters hurt as Palestinians call for right of return, end to land grabs 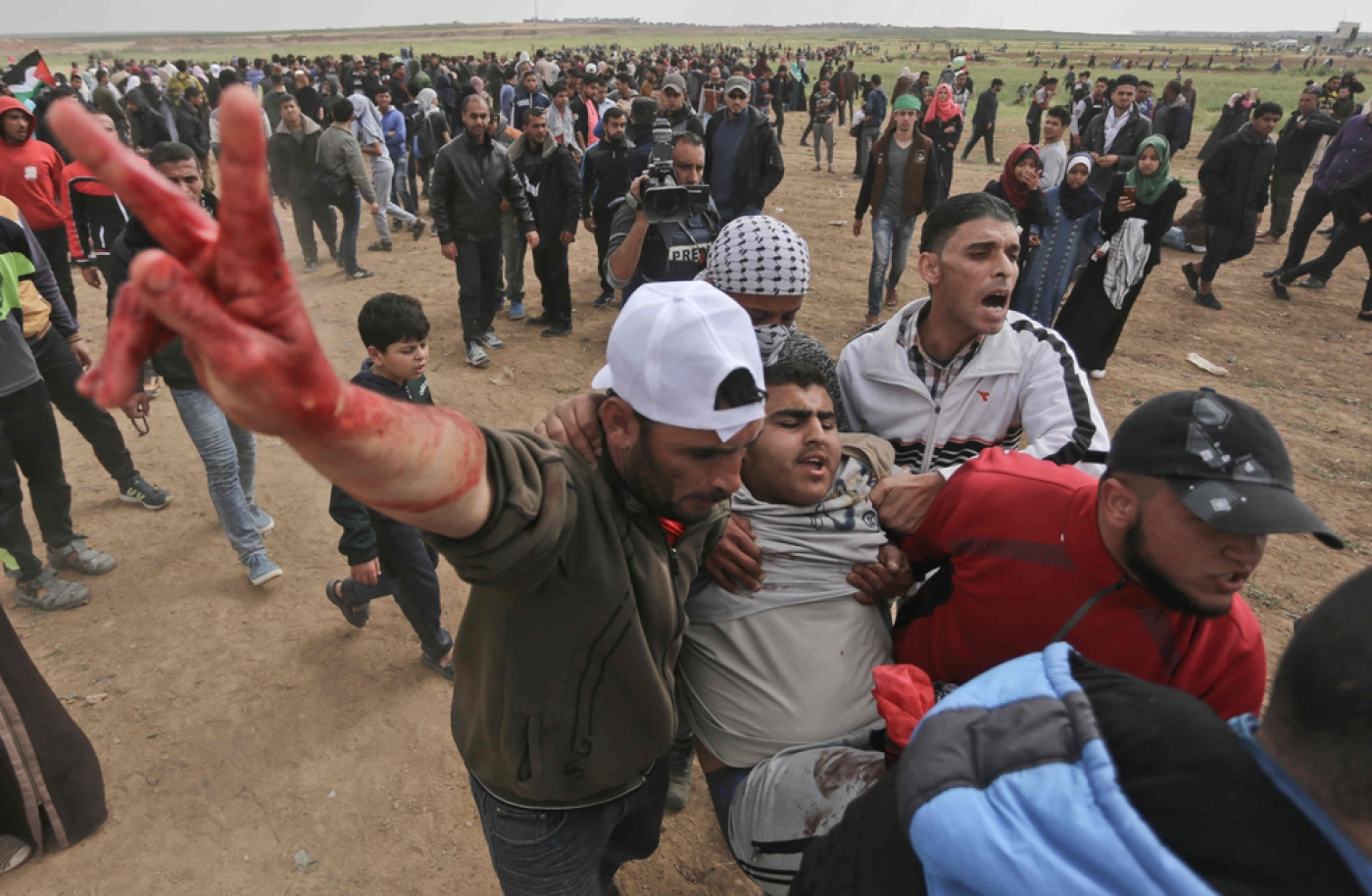 Israeli forces killed at least 16 Palestinians in the besieged Gaza Strip on Friday, according to authorities, as tens of thousands demonstrated across the occupied territories and Israel on "Land Day".

This year, it comes on the heels of months of anger over US President Donald Trump’s decision to move the American embassy to Jerusalem, largely perceived as the United States rejecting Palestinian claims to East Jerusalem as their capital as part of a two-state solution.

In the Gaza Strip, where 1.3 million of the small territory’s two million inhabitants are refugees, protest organisers have called for six weeks of demonstrations called the "Great March of Return" along the border of the besieged Palestinian enclave and Israel, starting on Land Day and culminating on 15 May for Nakba Day, marking the displacement of Palestinians by Israel in 1948.

With Israeli political discourse veering further to the right under Prime Minister Benjamin Netanyahu, Palestinians have grown increasingly disillusioned regarding the likelihood of negotiations or an improvement in their living situation in Gaza, the West Bank, East Jerusalem and Israel itself.

The ministry added that more than 1,000 demonstrators had been hurt as of late afternoon. A spokesperson for the Palestinian Red Crescent Society told MEE they estimated that about 800 protesters in Gaza had been hit by live fire.

Hours before the protests, an Israeli tank shell killed one Gaza farmer and wounded another, the health ministry said.

"Omar Samour, 27, was martyred and another citizen was wounded as a result of targeting of farmers east of Qarara village," a Gaza health ministry spokesman said. Residents of the southern Gaza Strip village said Samour had been gathering crops.

An Israeli military spokesman confirmed the incident. "Overnight two suspects approached the security fence and began operating suspiciously and the tank fired towards them," the spokesman said.

United Nations Secretary-General Antonio Guterres called for an independent and transparent investigation into the deaths and injuries in Gaza on Friday, his spokesman said in a statement.

"He also appeals to those concerned to refrain from any act that could lead to further casualties and in particular any measures that could place civilians in harm's way," UN spokesman Farhan Haq said.

The Gaza Ministry of Health confirmed at least 16 Palestinian demonstrators had been killed by Israeli forces on the border with Israel, and identified some of the slain Palestinians as: Mohammad Kamel Najjar, 29, who was killed near Jabalia in northern Gaza; Mahmoud Abu Muammar, 38, near Rafah in the south; Mohammad Abu Amro, a well-known artist in the Gaza Strip; 16-year-old Ahmad Odeh, north of Gaza City; Jihad Farina, 33, east of Gaza City; Mahmoud Rahmi, 33; Ibrahim Abu Shaer 22, near Rafah; Abd al-Fattah Bahjat Abd al-Nabi, 18; Abd al-Qader al-Hawajra, 42, killed in central Gaza; Sari Abu Odeh; and Hamdan Abu Amsha, near Beit Hanoun in northern Gaza.

Human rights NGO Adalah denounced the Israeli army’s use of live fire as a “brutal violation of the international legal obligation to distinguish between civilians and combatants,” and called for an investigation into the killings.

The Israeli army announced in a statement that it had declared the border area of the Gaza Strip a closed military zone - meaning all Palestinians getting close to the border fence could risk getting shot.

"The march has achieved its goals, it has shaken the pillars of the entity [Israel], and laid the first brick for the road of return," Ismail Haniyeh, one of Hamas' top political leaders, told MEE, while visiting a protest camp in Gaza.

According to the left-leaning Israeli outlet +972 Magazine, an Israeli group called the Coalition of Women for Peace plans to join the protest on the Israeli side.

"The gap between what we're hearing from within Gaza about the events and the incitement that we're hearing in the Israeli media is massive and leaves no doubt about the violent intentions of the Israeli authorities. We hope that our fears of a violent military response will be proven wrong, but regardless we will show up on Saturday to support the demonstrators, who have the right to demand their rights and their freedom," said Tania Rubinstein, a coordinator for group.

"Seven hundred metres away from those soldiers lies my right and the Palestinian people’s right to return home after 70 years of displacement. We will not wait another 70," Alaa Shahin, a young Palestinian man who was celebrating his wedding at a protest camp near Jabaliya, told MEE.

"I still keep the original documents for our land in Nilya, which I inherited from my father," said Yousef al-Kahlout, a retired history teacher who attended one of the Gaza demonstrations on Friday with five of his grandchildren. "Today, I explain to my grandchildren that they have the right to regain possession of it if I am not alive to achieve my dream to return."

While Gaza organisers have insisted that the demonstrations will be peaceful, several incidents of Gazans being detained after entering Israel in recent days – including three Palestinians who were carrying weapons – have seen Israeli forces keen to prove their control of the situation.

The Israeli army confirmed in a statement that it was using "riot dispersal means" - a term typically used to refer to tear gas and sound bombs - as well as firing at "main instigators" of the protest.

The Great March of Return also saw Israeli forces use drones to drop tear gas on the demonstrators - a technology that has only been used a few times in Gaza by Israeli forces.

Israel's military chief said on Wednesday that more than 100 snipers had been deployed on the Gaza border ahead of the planned mass demonstration near the frontier. Heavy earth-moving vehicles have built up dirt mounds on the Israeli side of the border and barbed wire has been placed as an additional obstacle against any mass attempt to breach the border into Israeli territory.

Meanwhile, Palestinians also demonstrated in Israel and the West Bank on Friday to commemorate Land Day. In the Palestinian-majority town of Arraba in the Galilee region of northern Israel, thousands, including Palestinian MPs from the Israeli Knesset, heads of municipalities, and religious figures, took to the streets.

Prior to the march, members of the Knesset's High Follow-Up Committee for Arab citizens of Israel visited the graves of the six Palestinian citizens of Israel who were killed during the first Land Day March in 1976, in cemeteries in Arraba, Sakhnin, and Deir Hanna.

"Israel is still stealing and confiscating our lands, and the oppression continues against our people inside '48, in the diaspora, and in Gaza," Arraba Mayor Ali Asleh said in a speech, using a term to refer to the lands on which Israel declared its state in 1948.

According to Palestinian media, clashes took places in some West Bank towns, including Ramallah-al-Bireh, Hebron, Bethlehem, Nablus, Qalqiliya, and a number of villages.

A spokesperson for the Palestinian Red Crescent told MEE that the organisation treated at least 63 demonstrators in the West Bank, most suffering from excessive tear gas inhalation, while at least 10 were wounded by rubber-coated steel bullets.

Ali Abunimah says: "Israel’s massacre of unarmed protesters today proves once again what has always been true: Israel’s problem is not the form of Palestinian resistance. It is the Palestinians’ mere existence." @AliAbunimah #GreatReturnMarch pic.twitter.com/PQRW8YrFwA

Nakba Day this year will also mark 70 years since the creation of the state of Israel and the forced displacement of 750,000 Palestinians, whose descendants now number in the millions living as refugees abroad or in the occupied Palestinian territory.