A 17-year-old Palestinian was shot dead by Israeli forces on the Gaza border on Friday, according to local health sources.

Bilal Khafaja, 17, was shot in the chest during skirmishes east of Rafah in southern Gaza, the Gaza Health Ministry said in a statement.

Israeli forces had also wounded at least 90 Palestinians with 37 people requiring hospital treatment, according to the Gaza Health Ministry.

The Ministry noted that at least 37 Palestinians required being taken to the hospital after Israeli forces fired live ammunition and tear gas at unarmed protestors.

Earlier Friday, the Israeli military said it had struck down Palestinian militants who had set off fire balloons from the Gaza Strip towards southern Israel.

Protests in the upcoming weeks are expected to be well attended as negotiations to ease the blockade on Gaza continues to stall, security sources told Haaretz news.

Palestinians continue to hold weekly protests across the Gaza Strip as part of the Great March of Return initiative that started several months ago.

Protest organisers said that Friday's demonstration was under the slogan: "We are returning despite your wrath and fury, Trump" and in response to America pulling its funding from the UN Relief and Works Agency for Palestinian Refugees (UNRWA).

Washington cut $200 million worth of funding from UNRWA and demanded the UN refugee agency redefines how a Palestinian refugee is classified. 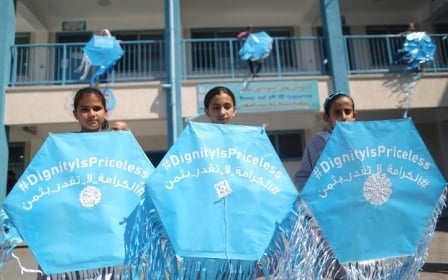