An Israeli minister has said Prime Minister Benjamin Netanyahu's government will not convene on Sunday to vote on the annexation of illegal settlements in the occupied West Bank.

After the White House released its plan for the Middle East on Tuesday, Netanyahu said he would bring the proposal before his cabinet at the start of next week.

However, Israel's Tourism Minister Yariv Levin, who is accompanying Netanyahu on his trip to Washington, said the vote had been delayed, adding that bringing the proposal to a vote "requires time to prepare and work on the different documents".

He also said the premier needs the official opinion of Attorney General Avichai Mandelblit before he can hold a vote.

The points laid out in US President Donald Trump's plan allow Israel to annex illegal settlements in the occupied West Bank, including the strategic Jordan Valley, refer to Jerusalem as Israel's capital, and deny Palestinians the right to return to their ancestral homes in Israel.

Miki Zohar, a lawmaker from Netanyahu's Likud party, told Haaretz on Wednesday that the plan would be brought before Israel's Knesset ahead of the elections scheduled for March.

Zohar said the plan would be pushed forward due to Netanyahu's decision to drop a request to receive immunity from persecution in three criminal cases he's been charged with.

Netanyahu could face a maximum sentence of 10 years in prison if he is found guilty.

"This is something we have wanted to do for a very long time, but there has always been something in our way, coming to tell us it is not possible," Zohar said. "Now we are in a position to do it."

While Attorney General Mandelblit said that he was not ruling out annexation before elections scheduled for 2 March, he has yet to look into the matter.

"Even an interim government has things it can do, urgent things," Mandelblit said. "And it's happened before that political deals [were made] a month or so before an election."

"We'll wait to see what the request is. They will have to explain what the urgency is and why it must be done before the election, and we'll see what we can do."

Jared Kushner, Trump's senior adviser and son-in-law, told CNN that he was not familiar with any Israeli plans to immediately annex West Bank settlements. 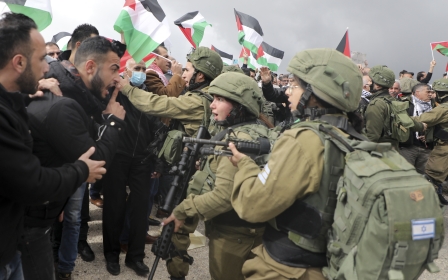