Israeli officials ramp up calls for a 'strong blow' against Gaza

Defence minister is the latest to call for increased military action in Gaza, and does not rule out the possibility of all-out war Israeli cabinet ministers have amplified calls for a "strong blow" against ruling party Hamas in the blockaded Gaza Strip in recent days, up to and including the possibility of all-out war.

"We must land a strong blow against Hamas. That's the only way to lower the level of violence to zero or close to zero," Israeli newspaper Haaretz reported Defence Minister Avigdor Lieberman as saying on Tuesday, after Israeli forces shot at a group of Palestinians allegedly trying to send incendiary balloons into Israeli neighbourhoods near Gaza that morning.

He added that he hoped the Israeli security cabinet, meeting on Wednesday to discuss the situation in Gaza, would take a hard line "even at a price of moving to a wide-scale confrontation".

In August, Israel carried out air strikes against sites allegedly used to make incendiary balloons and kites, and the ensuing exchange of fire between the Israeli army and armed Palestinian factions brought both sides close to war.

Lieberman has opposed indirect truce talks between Hamas and Israel that were prompted by the August escalation, which could have led to an easing of Gaza's blockade in exchange for assurances from Hamas about preventing attacks, but have since been stalled.

Lieberman's comments followed calls by far-right Education Minister Naftali Bennett for a harsh response against any Palestinians who cross the Israeli fence surrounding Gaza during regular protests on the boundary.

"The correct response is that a terrorist who enters Israel from Gaza cannot return alive. We need to kill terrorists who want to kill us," Bennett said on Monday.

"We are very close to a different kind of activity, an activity that will include very powerful blows. If it has sense, Hamas will stop firing and stop these violent disturbances – now," he said.

Hardliners Lieberman and Bennett have competed since late September over who might deliver the harshest statements on Israel's military action in Gaza, after Bennett claimed the Israeli response to the protests had been too weak.

Lieberman responded by pointing out how many Palestinians had been killed or injured during the protests compared to the lack of casualties on the Israeli side.

Hamas's military wing, the al-Qassam Brigades, said in a statement on Monday that "empty threats" from Israel would only encourage more protests.

Since the Great March of Return protests began on 30 March this year, at least 203 Palestinians have been killed and thousands injured by Israeli live fire.

Seven were killed and hundreds injured during the most recent protests on Friday, with Lieberman later suspending fuel supplies to the already energy-starved Gaza Strip. 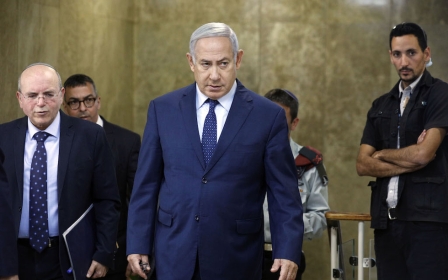