The US State Department released a statement urging 'both sides' to de-escalate tensions, drawing the ire of Palestinian rights activists An Israeli policeman scuffles with a Palestinian protester in front of the Dome of the Rock, in Jerusalem's Old City, 7 May (Reuters)
By
Ali Harb

A statement from the Biden administration that equally blamed Palestinians and Israeli forces for a night of violence in Jerusalem has angered Palestinian activists who say it amounts to a "blatant disregard" for Israeli abuses. But in a timid statement released on Friday night, the State Department urged "both sides to exercise decisive leadership" to quell the violence.

Washington also expressed "concern" about Israeli efforts to displace Palestinians without condemning the move or warning the Israeli government against it.

"We call on Israeli and Palestinian officials to act decisively to deescalate tensions and bring a halt to the violence," Secretary of State spokesperson Ned Price said.

"It is absolutely critical that all sides exercise restraint, refrain from provocative actions and rhetoric, and preserve the historic status quo on the Haram al-Sharif / Temple Mount – in word and in practice."

"Labelling this as 'confrontations' deliberately moves the narrative from apartheid to one that is 'both sides'," Jinan told MEE.

"Let me be clear: There is no both sides here. Palestinians are under occupation, and the United States has systematically supported this - whether through funding Israel's military with our tax dollars or narratives such as this where blame is placed on both sides."

Israeli courts have ruled in favour of settlers to push out Palestinians from their homes in Sheikh Jarrah, based on claims of Jewish ownership dating back to the Ottoman era. Recent efforts to evict several families in the neighbourhood have put the city on edge.

Palestine solidarity activists say the push amounts to ethnic cleansing as part of a broader campaign to change demographics in the holy city.

East Jerusalem, captured by Israel in 1967 and subsequently annexed in 1980, is considered occupied Palestinian land by most of the international community.

Amer Zahr, the president for New Generation for Palestine, noted a flaw in the American position: it calls on Palestinian officials to deescalate the situation when Israel considers Jerusalem as an integral part of its territory and prohibits any Palestinian political activity in the holy city.

"The statement calls on Palestinian and Israeli officials to act in East Jerusalem," Zahr told MEE.

Zahr said East Jerusalem has been enduring a brutal military occupation for more than 50 years.

"This statement by the United States government is the equivalent of saying 'all lives matter'," Zahr told MEE, referring to a slogan often used to counter Black Lives Matter protests. "It equalises the victim and the oppressor."

When it comes to Washington's rivalry with Russia and China, President Joe Biden and Secretary of State Antony Blinken have repeatedly cited Washington's efforts to uphold the "rules-based system" that governs international relations.

Israel's actions in Jerusalem and the West Bank, including home demolitions, settlement expansion and displacement of Palestinians clearly violate numerous provisions of the Geneva Convention.

International law prohibits the occupying power from destroying property or transferring its own civilians to occupied territories.

But the Biden administration has refrained from criticising Israel for defying the "rules-based system".

On the contrary, as a candidate, Biden pledged to continue Washington's unconditional aid to Israel, dismissing the idea of using the assistance as leverage to pressure the Israeli government against violating Palestinian rights as "bizarre".

The State Department's statement on Friday did raise the issue of displacement in East Jerusalem, settlement expansion and home demolition, but Palestinian rights activists say the language fell far short of calling for accountability.

"We are also deeply concerned about the potential eviction of Palestinian families in Sheikh Jarrah and Silwan neighborhoods of Jerusalem, many of whom have lived in their homes for generations," it said.

"As we have consistently said, it is critical to avoid steps that exacerbate tensions or take us farther away from peace. This includes evictions in East Jerusalem, settlement activity, home demolitions, and acts of terrorism."

The statement even framed settlers' violence against Palestinians as "reciprocal" and did not mention actions by Israeli security forces. "There is no excuse for violence, but such bloodshed is especially disturbing now, coming as it does on the last days of Ramadan," it said.

"This includes Friday’s attack on Israeli soldiers and reciprocal 'price tag' attacks on Palestinians in the West Bank, which we condemn in no uncertain terms."

Zahr said expressions of concern over specific actions misses the broader issue of the occupation.

"It is becoming clear to us that the Biden administration, as we thought, doesn't see any problem with Israeli occupation, but simply problems with certain bad acts," he said.

"That is not how we Palestinian see it, and Arabs in general. The occupation is evil in all of its forms. And this is just the latest thing."

Ahmad Abuznaid, the executive director of the US Campaign for Palestinian Rights, said Washington's statement of "bothsidesism" fails to acknowledge America's own role in the conflict.

"It evades accountability for the Israelis but also for the US government and State Department that has continued to shield Israel from any form of accountability," Abuznaid told MEE.

"And they continue to funnel US tax dollars to this oppressive apartheid system. Lectures are not what we need from the US State Department. We need action."

On Saturday, progressives in Congress continued to express solidarity with Palestinians in Jerusalem after several lawmakers urged the State Department to condemn Israeli abuses over the past week.

"The United States must speak out strongly against the violence by government-allied Israeli extremists in East Jerusalem and the West Bank, and make clear that the evictions of Palestinian families must not go forward," Senator Bernie Sanders said in a tweet on Saturday.

"The forced removal of long-time Palestinian residents in Sheikh Jarrah is abhorrent and unacceptable," Warren said. "The Administration should make clear to the Israeli government that these evictions are illegal and must stop immediately." 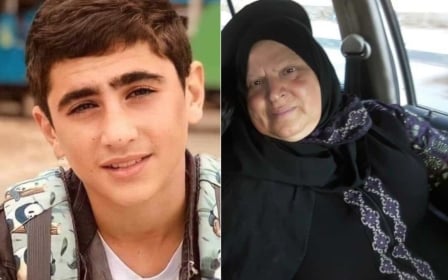