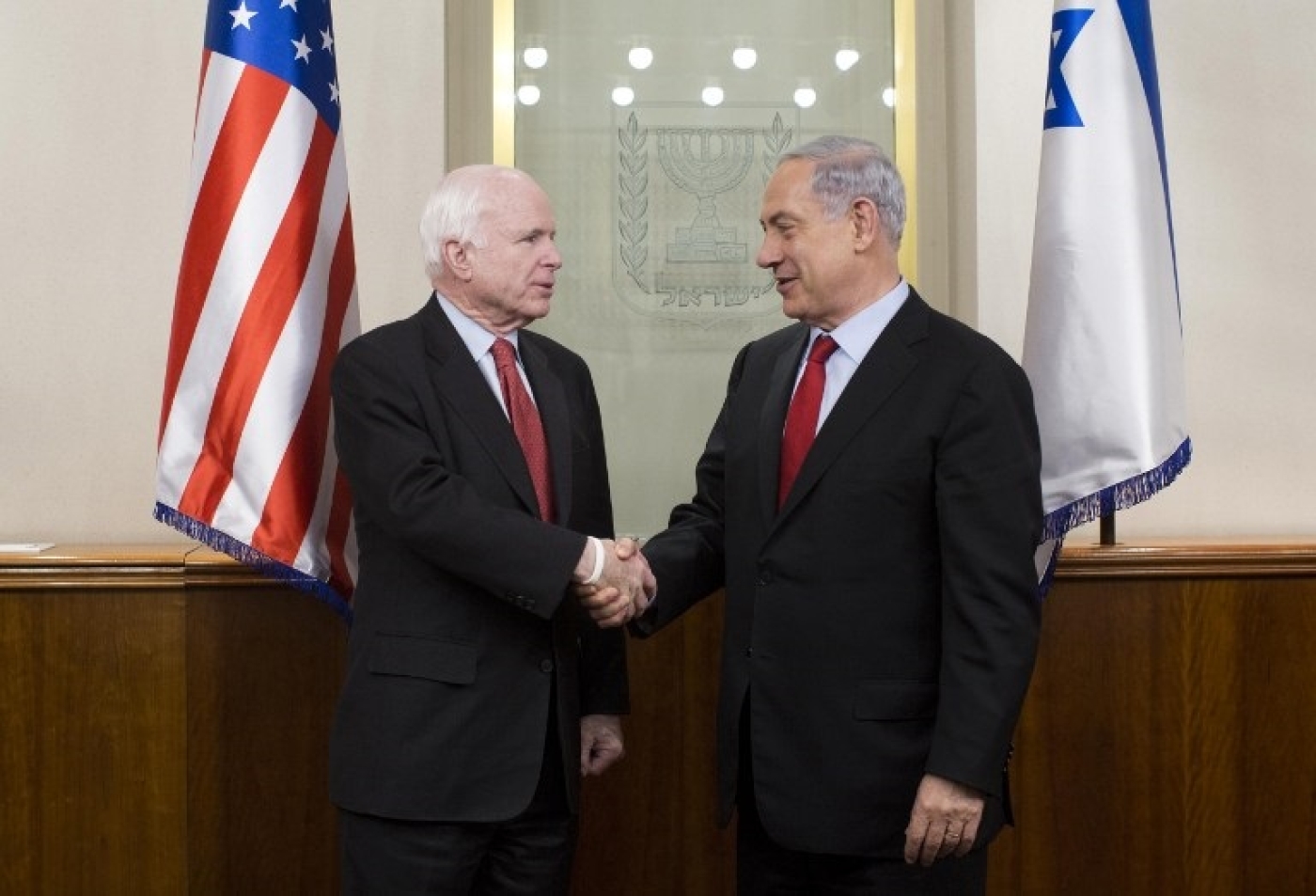 Netanyahu shakes hands with US Senator John McCain during a meeting in Washington in January, 2015 (AFP)
By
MEE and agencies

With the US Senate officially due to start debating the Iran nuclear deal due to start in Washington on Wednesday, rhetoric from political opponents of the deal has been ratched up.

Republican Senator and former presidential hopeful John McCain said on Tuesday that he was "overjoyed" that Israel possesses nuclear weapons to guard against regional threats.

McCain, who is supporting the rejection of the nuclear deal with Iran penned in July, said that he was happy Israel had "nuclear weapons in light of Iran's aggressive stance".

His comments were made to the US’s Senate Armed Services Committee and came in response to testimony from former CIA official Bruce Riedel, who said that based on his 30-year career in intelligence, he believed "Israel has between 80 and 200 nuclear weapons," and the "best intelligence system in the Middle East".

The hearing was happening as part of a wider debate raging in Washington about the Iran deal which was signed by Iran and the so-called P5+1 – made up of the five permanent members of the security council plus Germany – but faces stiff opposition in Washington.

The Republicans and some Democrats have spoken out against the deal, saying that it would strengthen long-time foe Iran and endanger Israel.

Earlier on Tuesday, another prominent Republican and a 2016 presidential candidate, Senator Lindsey Graham, said that by signing the deal the Obama administration had opened up "the biggest terrorism of the world".

On Wednesday, Iran's Supreme Leader Ayatollah Ali Khamenei lashed out at America saying that the Americans were trying to “infiltrate” Iran to “impose their will”.

"The Americans don’t hide their hostility towards Iran: One of them smiles, and at the same time, others take measures against Iran,” he said.

Khamenei: Israel will not exist by 2040

Khamenei also made some highly controversial comments toward Israel, saying that the country should not worry about Iran’s nuclear programme as he believed that Israel would not exist in 25 years’ time when the deal is due to expire.

"I'd say [to Israel] that they will not see [the end] of these 25 years," Khamenei said. "God willing, there will be no such thing as a Zionist regime in 25 years. Until then, struggling, heroic and jihadi morale will leave no moment of serenity for Zionists."

However, on Tuesday, four more Democratic senators announced that they would not oppose the deal, which should give Obama enough support in the chamber to not have to veto a Republican resolution rejecting the agreement.

Senate minority leader Harry Reid endorsed the deal fully in a speech at the Carnagie Endowment for International Peace on Wednesday.

“I believe the answer is yes. And today I am gratified to say to my fellow Americans, our negotiating partners, and our allies around the world: this agreement will stand. America will uphold its commitment and we will seize this opportunity to stop Iran from getting a nuclear weapon," he said.

“While the formal debate begins this afternoon, the private negotiations that brought us to this point have been going on for years – and the public’s review of the agreement has gone on for months."

Analysts have long speculated that while Obama had decided to push forward with its nuclear deal with Iran no matter what, he had while placating Israel by continuing to shield its unofficial nuclear programme from international inspection.

Israel has never publically acknowledged its nuclear weapons programme, although it is widely believed that has had one since the 1960s when it penned a secret deal with the US.