Tribal leader and MP was sentenced to 12 years hard labour, months after being expelled from parliament Osama al-Ajarmeh, an outspoken tribal figure, has been sentenced to 12 years in prison (Facebook)
By
MEE staff

Protests have broken out in Jordan following the sentencing of a politician for insulting the country's king.

Osama al-Ajarmeh was expelled from parliament in June for allegedly inciting riots and was arrested the following week.

On Tuesday, the state security court announced a 12-year jail sentence of hard labour for Ajarmeh, provoking outrage from his supporters.

Demonstrators in Amman threw rocks at posters of King Abdullah on Wednesday.

Protesters throw rocks at @KingAbdullahII picture in Marka in amman after sentencing MP Osama Ajarmah to 12 years for criticising the king.He led a massive protest against Israeli war on Gaza last may before he was arrested and charged. #اسامة_العجارمة pic.twitter.com/FwvO1QVvaP

Other tribal supporters of Ajarmeh burned state buildings and set fire to tyres.

The Jordanian House of Representatives voted in favour of sacking Ajarmeh over what the MPs considered "offensive" statements against the king and society.

In May last year, Ajarmeh said power outages in Jordan were deliberate "in order to prevent solidarity marches with Palestine in light of the recent Israeli aggression". The protests were planned by tribes demanding the expulsion of the Israeli ambassador, following deadly air strikes on Gaza.

The sacking of Ajarmeh, an outspoken tribal figure, triggered concerns about the potential for rising tensions between the monarchy and the MP's tribal allies.

In the wake of his suspension, violent confrontations between police and Ajarmeh's supporters left four police officers wounded in the suburb of Naour, a stronghold of the Ajarmeh tribe in southwest Amman. The parliament voted the following day to expel the MP, accusing him of causing the riots. While many have objected to the decision to suspend him over his parliamentary speech, other videos of Ajarmeh that later surfaced online garnered support for his ousting.

In one video clip that went viral, he described the king as "a pig" and said he would be willing to "shoot him between the eyes" with a pistol.

In what looked like a cinematic display, with Bedouin Saudi music in the background, Ajarmeh addressed a crowd of masked male supporters, carrying a sword given to him by men from the Bani Hassan tribe, and with a gun in a shoulder holster.

The comments were denounced by fellow MPs, 109 of whom signed a memorandum calling for his permanent suspension. Parliament Speaker Abdulmunim Oddat denounced Ajarmeh’s “perverted utterances” and “devious, slanderous” allegations about the king. 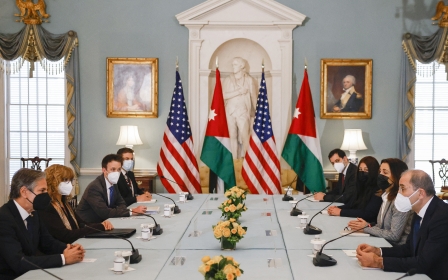 Diplomacy
Arab states must do 'heavy lifting' in the region as US pulls back, says Jordan's foreign minister