Abdullah tells US politicians that radicals are being 'manufactured in Turkey... as part of Turkish policy' 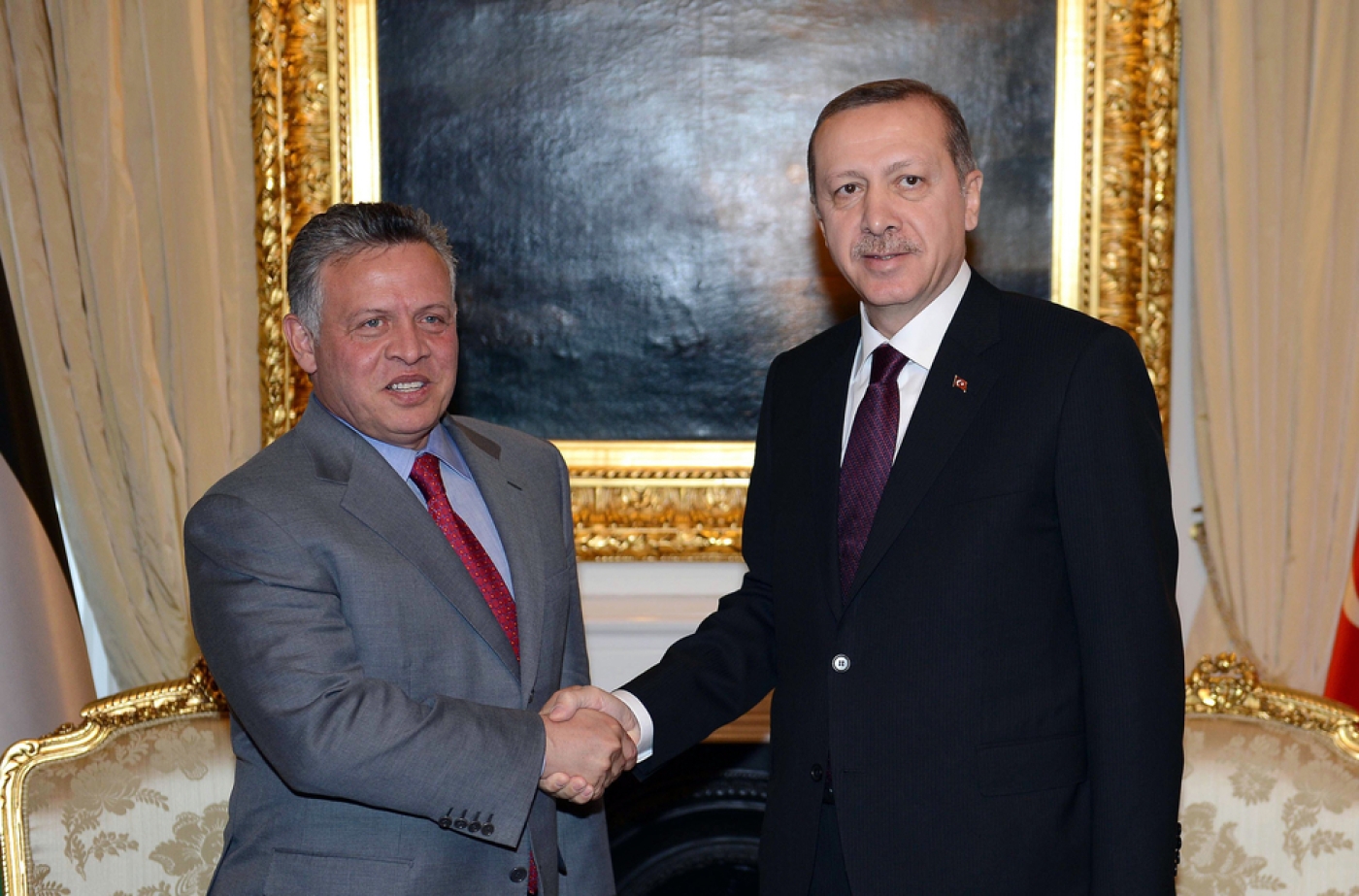 King Abdullah of Jordan accused Turkey of exporting terrorists to Europe at a top level meeting with senior US politicians in January, the MEE can reveal.

The king said Europe’s biggest refugee crisis was not an accident, and neither was the presence of terrorists among them: “The fact that terrorists are going to Europe is part of Turkish policy and Turkey keeps on getting a slap on the hand, but they are let off the hook.”

Asked by one of the congressmen present whether the Islamic State group was exporting oil to Turkey, Abdullah replied: ”Absolutely.”

Abdullah made his remarks during a wide-ranging debriefing to Congress on 11 January, the day a meeting with the US president, Barack Obama, was cancelled.

The White House was forced to deny that Obama snubbed one of America’s closest allies in the Middle East, attributing the cancellation to "scheduling conflicts," although Obama and Abdullah met briefly at Andrews Air Force Base a day later.

Present at the meeting in Congress were the chairmen and members of the Senate Intelligence, Foreign Relations and Armed Services committees, including Senators John McCain and Bob Corker, and Senators Mitch McConnell and Harry Reid, the Senate Majority and Minority leaders respectively.

According to a detailed account of the meeting seen by MEE, the king went on to explain what he thought was the motivation of Turkey's president, Recep Tayyip Erdogan.

Abdullah said that Erdogan believed in a “radical Islamic solution to the region".

He repeated: "Turkey sought a religious solution to Syria, while we are looking at moderate elements in the south and Jordan pushed for a third option that would not allow a religious option.”

The king presented Turkey as part of a strategic challenge to the world.

"We keep being forced to tackle tactical problems against ISIL [the Islamic State group] but not the strategic issue. We forget the issue [of] the Turks who are not with us on this strategically."

He claimed that Turkey had not only supported religious groups in Syria, and was letting foreign fighters in, but had also been helping Islamist militias in Libya and Somalia.

Abdullah claimed that "radicalisation was being manufactured in Turkey" and asked the US senators why the Turks were training the Somali army.

The king invited the US politicians present to ask the presidents of Kosovo and Albania about the Turks.

Abdullah said that both countries were begging Europe to include them, before Erdogan did.

Abdullah was supported in his remarks by his foreign minister, Nasser Judeh, who said that the Albanian president (Bujar Nishani) was a Catholic married to a Muslim, and that that was a model which should be protected in a Muslim majority country.

Judeh said that when the Russian bombing campaign prevented Turkey from establishing safe zones in northern Syria to stop refugees from coming to Turkey, "Turkey unleashed the refugees onto Europe”.

Both Judeh and Abdullah bridled at the $3bn deal offered by Europe to Turkey, noting that Turkey had only 2m Syrian refugees out of a population of 70m, whereas Jordan was facing “a bigger problem proportionally".

Jordan and Turkey are officially allies. The Turkish prime minister, Ahmed Davutoglu, cancelled an official visit to Jordan after the latest bomb attack in Turkey, which on 13 March killed 34 people in Ankara.

The Kurdish Freedom Falcons (TAK), an offshoot of the PKK, or Kurdistan Workers' Party, claimed responsibility for the bombing.

The postponed visit is due to take place this weekend and Davutoglu will be mindful that Abdullah told senators that Turkey was using the Kurds as an "excuse" for its policies in Syria.

Galip Dalay, research director at Al Sharq Forum and senior associate fellow on Turkey and Kurdish Affairs at Al Jazeera Center for Studies, said it was wrong to portray Turkey as having a strategic goal of establishing an Islamist government in Syria.

He said: "Turkey did its best in the first eight months of the Syrian crisis to find a political solution to the crisis, which would have included [Syrian President] Bashar Assad. Back then, Turkey was criticised in the region and the West for being too soft on the Assad regime and being too optimistic about the possibility of reform. When it became clear, after eight months of arduous attempts, that Assad had no intention of initiating a political and democratic process to meet the demands of the protestors, Turkey threw its weight behind the opposition."

Dalay said that the claim Turkey was buying oil from the Islamic State group was a Russian fabrication concocted by Moscow after Turkey shot down the Russian fighter. "Turkey is not the only one saying there is no evidence to support this claim. The United States said it too."

The Turkish government would not comment officially on Abdullah’s reported remarks on 11 January. But a senior Turkish source accused the king of becoming "the spokesman for Bashar al-Assad".

He said the portrait emerging from these remarks was not one of a king speaking but of a "Western journalist with a fuzzy state of mind and little familiarity with the region".

He said: “Turkey is definitely carrying out an intense struggle against Daesh [a reference to the Islamic State group]. Bombings take place in Turkey, not in Jordan. When this is the case, groundless accusations by King Abdullah are totally unacceptable.

"Moreover, his tackling of the Daesh issue with such unfounded information also raises the question about whether Jordan could play a meaningful role in the fight against Daesh.”

He said the king’s claims that IS was selling oil to Turkey were not only absurd but showed that Abdullah did not have the slightest idea about what was going on in Syria.

"The king's statements and accusations against Turkey are not the first. Unfortunately, all of his allegations are the same as the slanders frequently expressed by the Assad regime.

"It would be to Jordan's and the region's interest if Jordan, as a friend of Turkey, were to work for a strategic cooperation with a strategic power like Turkey, instead of acting like the spokesperson of Assad.”