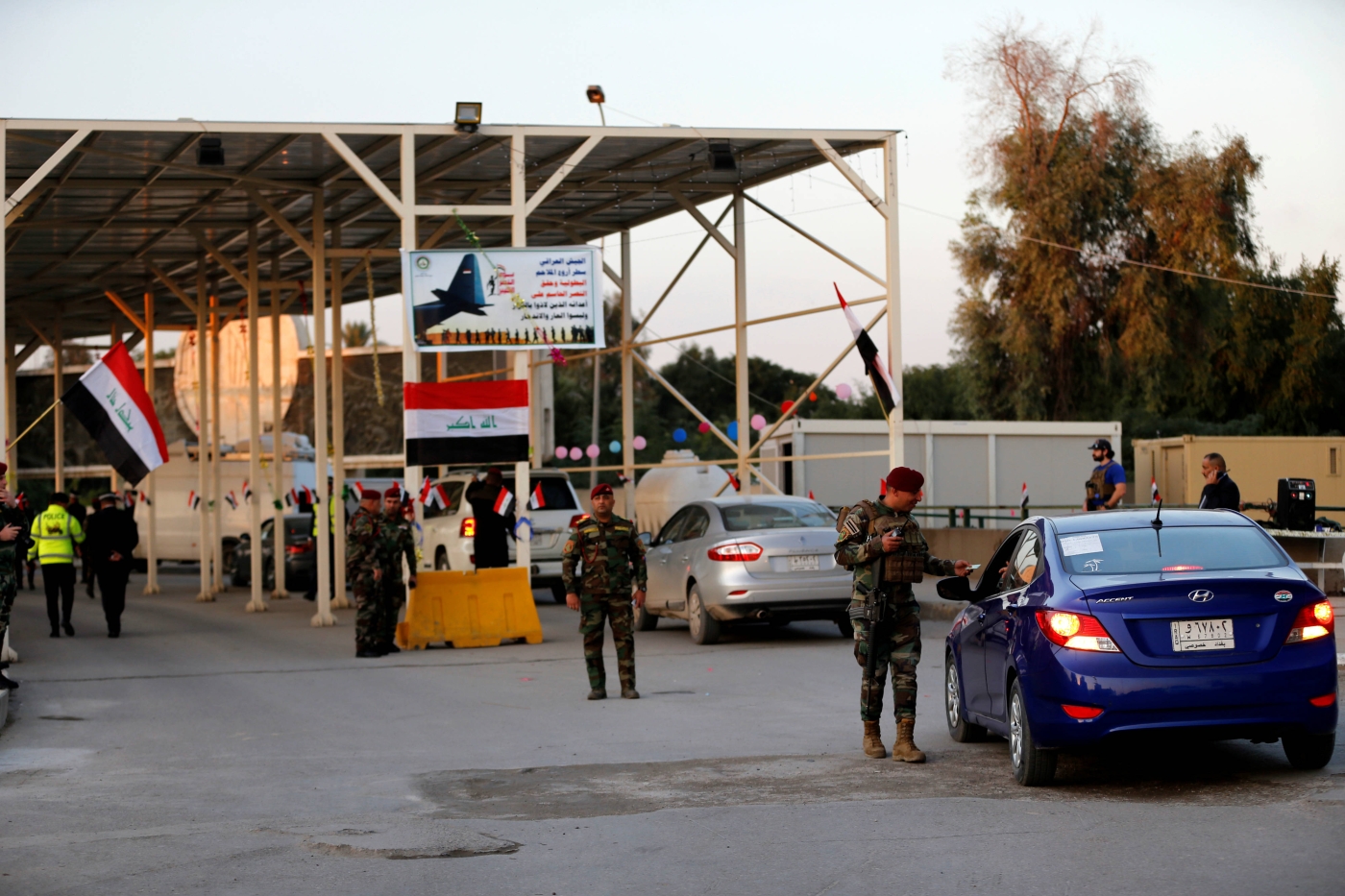 Iran-backed groups in Iraq have issued a flurry of condemnations over a rocket attack on the Green Zone in Baghdad, as tensions continue to flare between Iran and the US.

A Katyusha rocket was fired on Sunday into Baghdad's Green Zone - which houses government offices and embassies, including the US mission - just days after the US evacuated non-essential staff from Iraq after supposedly learning of an Iranian threat.

"A Katyusha rocket fell in the middle of the Green Zone without causing any losses," the Iraqi military said in a statement, adding it landed near the Monument of the Unknown Soldier.

The monument is located in open ground roughly half a kilometre north of the riverside US embassy compound.

A US State Department official confirmed that a "low-grade" rocket had landed in the Green Zone near the embassy without causing damage or casualties.

The official added that, though there had been no claim of responsibility, the US would "hold Iran responsible if any such attacks are conducted by its proxy militia forces or elements of such forces, and will respond to Iran accordingly."

Qais al-Khazali, leader of Asaib Ahl al-Haq (AAH), issued a statement saying the attack on the Green Zone was in the interest of Israel and designed to provide an excuse for an attack on Iran and pro-Iran factions.

"We warn against the mixing of cards that are intended to create pretexts for war and are intended to damage Iraq's political, economic and security situation," he tweeted late on Sunday.

Naeem al-Aboudi, a spokesperson for AAH, also tweeted that it was "very possible" that the Islamic State (IS) group was behind the attack. 'Nobody really knows what's going on': Iraq caught between US and Iran again
Read More »

Kataib Hezbollah, another Iran-backed armed group, issued a condemnation as well, saying the attack was "unjustified, its timing inappropriate, and it does not serve the public interest".

Khazali and Kataib Hezbollah are designated terrorists by the US State Department, while the US Congress has been pushing legislation to designate the Khazali's organisation AAH as a terrorist entity.

Hadi al-Ameri, chief of the Badr Organisation and the Fatah Coalition in parliament, also said the attack was in the interest of the "Zionist entity", referring to Israel.

"Anyone who tries to ignite the war from Iraq is either ignorant or planted, because all the parties to the war do not want war, neither the Islamic Republic, nor the United States - the only one pushing for war is the Zionist entity, so we call on all Iraqis not to be a fire for this war," he said in a statement. 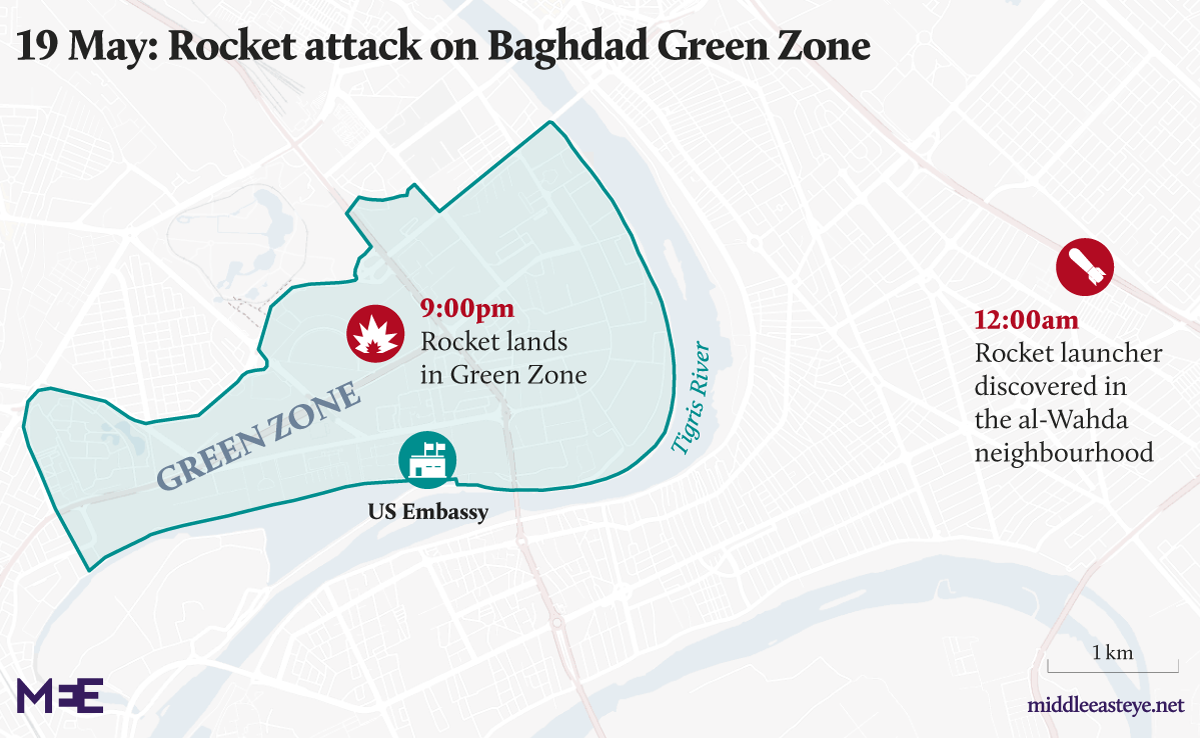 The embassy in Baghdad and US consulate in the Iraqi Kurdish regional capital Erbil evacuated non-emergency staff this week, out of apparent concern about perceived threats from Iraq's neighbour, Iran.

One US official, speaking on condition of anonymity, said Washington was considering sending a small number of additional personnel to protect the embassy.

The official said talks on this had been going on prior to the rocket incident and stressed that the number of additional personnel would be low.

In recent weeks, US President Donald Trump's administration has said it sent additional forces to the region to counter what it called credible threats from Iran against US interests, including from militias it supports in Iraq.

Tehran has described US moves as "psychological warfare" and a "political game".

Both Iran and the US have said they do not want war.

Hours after the blast in Baghdad, Trump wrote on Twitter: "If Iran wants to fight, that will be the official end of Iran. Never threaten the United States again!"

The Katyusha multiple rocket launcher is an inexpensive type of rocket artillery that can deliver explosives to a target quicker than conventional artillery, but is less accurate.

After the blast, Iraqi police special forces found a rocket launcher in eastern Baghdad's al-Sina district, about 7km away across the Tigris River from the Green Zone, and sealed off the area, a police source told Reuters.

Officers were searching for suspects and an ordinance disposal team from the Baghdad Operations Command was inspecting the launcher, the source said.

The Green Zone was regularly targeted by mortars during the US occupation of Iraq that ended in 2011.

Rockets have occasionally been fired into the Green Zone since then.

The latest such incident was in September, when three mortar shells landed inside the Green Zone, causing no casualties.