Kerry: US has to talk to Assad to end civil war The United States must negotiate with Syrian President Bashar al-Assad to end the civil war, Secretary of State John Kerry conceded in an interview that aired Sunday.

"Well, we have to negotiate in the end. We've always been willing to negotiate in the context of the Geneva I process," Kerry said in an interview carried out Saturday. He stressed that Washington was working hard to "re-ignite" efforts to find a political solution to end the war.

The United States helped lead international efforts to kick-start peace talks between Assad and a splintered Syrian opposition, bringing the two sides together in Geneva for the first time early last year. But after two rounds of talks, the negotiations collapsed in bitter acrimony and no fresh negotiations have been scheduled while the scale of the killing and devastation has mounted.

"So if he's ready to have a serious negotiation about the implementation of Geneva I, of course, if people are prepared to do that. And what we’re pushing for is to get him to come and do that," he replied when asked if he would negotiate with the Syrian president.

The interview, aired on the fourth anniversary of the bloody uprising against Assad, could mark a softening of the US’s initial anti-Assad stance.

The administration of US President Barack Obama has long called for Assad to step down, saying that he has lost all legitimacy and accusing him of using chemical weapons against civilians - a claim that almost pushed Obama to launch airstrikes to topple Assad in August 2013.

The rise of the Islamic State group and the formation of the US-led anti-IS coalition last summer has pushed most analysts to conclude that the West could be shifting its stance.

Kerry’s interview aired just hours after the Syria’s opposition coalition announced that it would discuss at a meeting in Cairo next month the possibility of Assad remaining in power for two more years until elections can be held. It is unclear whether all Syrian opposition groups will even attend the proposed meeting.

According to the Syrian Observatory for Human Rights, more than 215,000 people,  including 66,000 civilians, have now been killed and half of the country's population displaced, prompting human rights groups to accuse the international community of "failing Syria".

Women and children were injured in the attack, with the observatory adding that the death toll was expected to rise due to the number of serious injuries. The attack was the latest in a long line of government assaults, aimed at recapturing the stronghold from which rebels have regularly fired missiles into the capital.

An AFP photographer on the ground said the raids were continuing and that residents were sheltering in basements, terrified of the ongoing bombardment.

Syria has been carved up by government forces, militant groups like Islamic State, Kurdish fighters and the remaining opposition forces, referred to as “moderate” by the US and its allies.

"This is one of the worst tragedies any of us have seen on the face of the planet," Kerry said, in an interview recorded in the Egyptian resort of Sharm el-Sheikh where a major investment conference was being concluded.

He insisted that despite the challenge of the US-led fight against IS, which has seized territory in Iraq and Syria, Washington was still focused on ending the Syrian civil war.

"We are increasing our efforts in a very significant way, working with the moderate opposition, but doing much more than that also," Kerry said. "We're also pursuing a diplomatic track. We have had conversations with a number of different critical players in this tragedy.”

Russia, which has close links to Assad, helped initiate the Geneva II talks in 2013, which were aimed at bringing about a political transition based on earlier Geneva I negotiations. Kerry met in Geneva at the beginning of March with Russian Foreign Minister Sergei Lavrov to discuss ways of bringing all sides back to the negotiating table.

"We are working very hard with other interested parties to see if we can reignite a diplomatic outcome," Kerry said. President Obama "is extremely seized of the issue and focused on it with the intent to see what we can do to change the dynamic," he said. 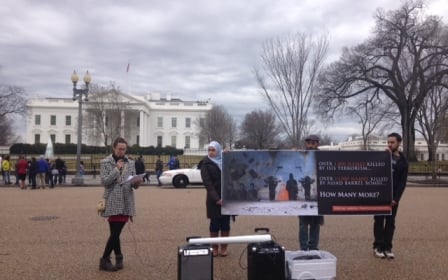