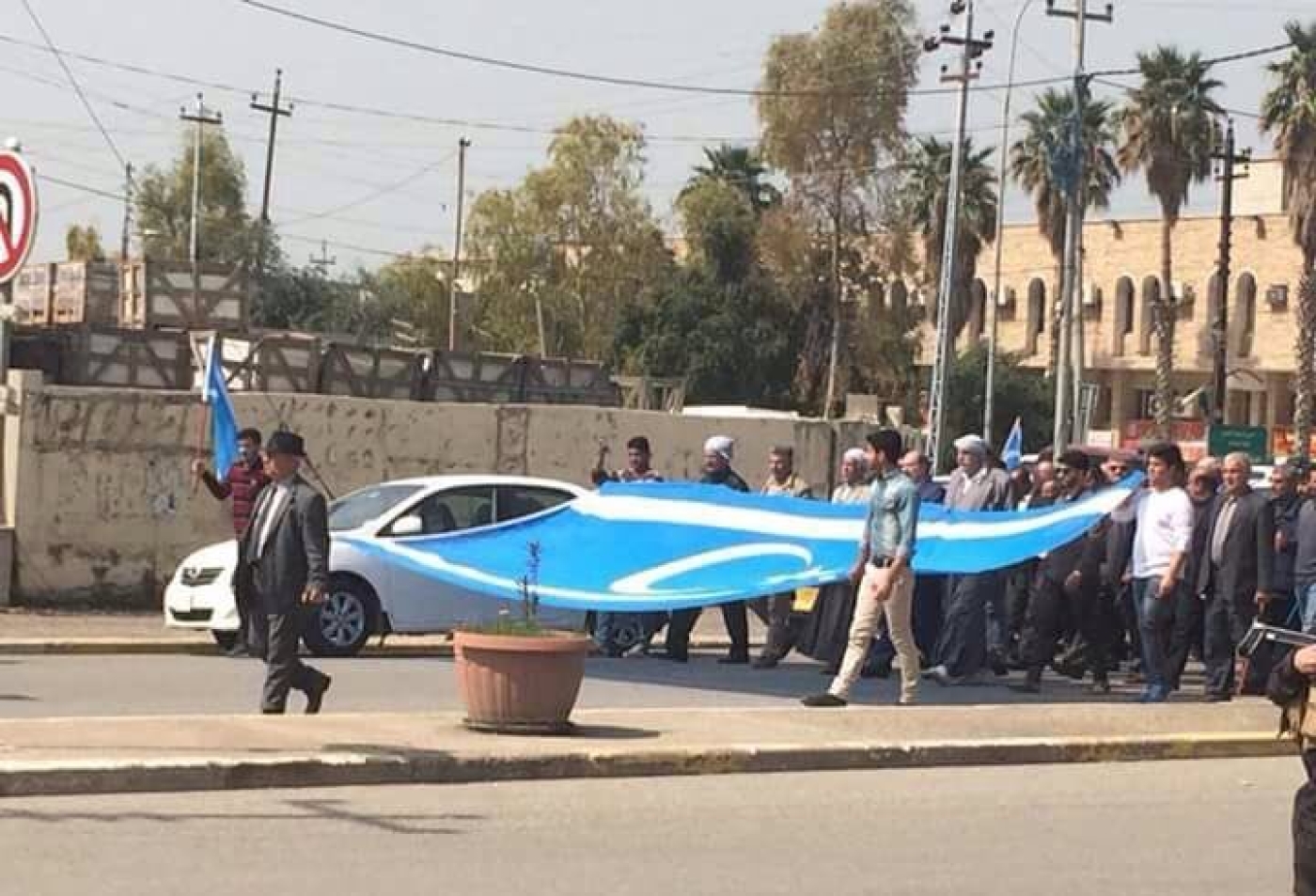 Turkmens in the Iraqi city of Kirkuk took to the streets on Wednesday, angry over the raising of the flag of Iraq's semi-autonomous Kurdish region on a number of municipal buildings in the city.

On Tuesday the Kirkuk Provincial Council (KPC) voted to hoist the flag of the Kurdistan Regional Government (KRG) on public buildings in the province, a potentially inflammatory move in an ethnically diverse city whose ownership is a source of dispute between the central government in Baghdad and the KRG.

Only the 25 Kurdish provincial councillors backed the measure, while 16 Arab and Turkmen members did not take part in the session.

Protests on Wednesday were led by the Iraqi Turkmen Front, an organisation formed in 1995 to represent the interest of the Iraqi Turkmens, an ethnic group that are culturally and linguistically very similar to the inhabitants of Turkey, but who were left on the Iraqi side of the border following negotiations over Turkey's borders in the 1930s.

A #Turkmen convoi showing presence against plans to raise #Kurdistan flag in #Kirkuk city which Turkmens recognize as their capital. #Iraq pic.twitter.com/rsKip8Vcci

Following the decision, Ali Mahdi, head of the Turkmen Front in Kirkuk Provincial Council, told the NRT channel that Turkmen and Arabs had not been consulted prior to the decision.

“We are concerned by the decision of Kirkuk Provincial Council,” Mahdi added. "We are not against the Kurds but we are against any decision which is against the constitution."

Turkmen protesters chanted “no for violation of the constitution and law" and raised the blue Turkmen flag. Many Kirkuk residents fear that the raising of the flag could be a prelude to annexation.

Kirkuk has long been claimed by Kurds as the cultural capital of a future independent Kurdish state. KRG Peshmerga have effectively occupied the city since June 2014 when the Iraqi army fled in the face of an onslaught from the Islamic State group. The status of the city following the final defeat of IS has been a major point of contention between the KRG and Baghdad.

Turkmens have also long claimed the city - under Ottoman control, Kirkuk was part of the Mosul Vilayet, which was the focus of intense negotiations between the British and Turks until 1926 when Turkey reluctantly relinquished the province to the Kingdom of Iraq. Today, the Turkmen population of Kirkuk is thought to be about 180,000.

Some mocked the demonstrators for their low turnout, pointing out the small size of the Turkmen population in Kirkuk:

"A seflie with all Turkmen in Kirkuk," - A Kurdish guy in #Kirkuk wrote on Facebook.#TwitterKurds #Kurdistan pic.twitter.com/KHJqKlXGmx

Turkey's foreign minister Mevlet Cavusoglu criticised the "unilateral" move on Wednesday evening and claimed that Turkey had been informed by Nechirvan Barzani, the prime minister of the KRG, that it was also opposed to the move.

“We don’t find correct the vote held by the regional administration," he told TRT.

“There are several Turkmens living in Kirkuk, Arabs and Kurds as well. Prior to the vote, our advisor Umed informed Nechirvan Barzani on our stance.”

However, on Thursday, Barzani contradicted Cavusoglu's comments and said that the move to raise the flag in Kirkuk showed the possibility of "coexistence" in the city.

“In a complete conflict like that in Iraq, the KRG and Kirkuk governorate have shown a great example of coexistence and keeping their areas from tensions and sectarian fighting,” Barzani said in a statement.

KRG MP Mohammed Kamanl also praised the move, citing the Peshmerga's defence of the city since the beginning of the IS assault in 2014.

"We find it surprising that some are bothered by the KRG flag. The (Kurdish) Peshmerga force have defended all the communities of the province from (Islamic State) attacks,” said Kamanl, speaking on Tuesday.

Muna Kahveci - a Turkmen member of the KRG parliament - also applauded the move on Facebook:

The United Nations had already expressed concerns about the governor's decision to fly the Kurdish regional flag over the citadel in Kirkuk, warning against "unilateral steps" that could inflame tensions.

"The United Nations Assistance Mission for Iraq (UNAMI) is concerned by the recent decision of the governor of Kirkuk to raise the flag of the Kurdistan region of Iraq over Kirkuk citadel," it said in a statement.

UNAMI "cautions against any unilateral steps that might jeopardise harmony and peaceful coexistence among many ethnic and religious groups that rightly call Kirkuk their home and want to live and work together," it said.