'My neighbour, he was 14 or 15, was running beside me. He said he was wounded and when I looked he was covered in blood. He died.' SURUC, Turkey - After months of heavy fighting, many Kobane residents thought that the worst was behind them. The city lay in ruins, but many had begun returning to their homes to rebuild their lives. This homecoming, however, was shattered when Islamic State (IS) militants broke through Syrian Kurdish lines, announcing their return with a dawn suicide attack on the southern entrance to the city.

During the 48-hour siege that followed, IS killed more than 235, mostly civilian, Syrian Kurds. Hundreds more were able to flee north to Turkey where they are now able to recall the horrific events of last Thursday.

According to their accounts, IS first went from house to house slaughtering Kobane residents in the dawn raid. Some were executed at close range, others gunned down as they slept following early 4am prayers in the first week of Ramadan. While the world’s media focused on the beach attacks in Tunisia, where an IS supporter killed 36 mostly Western holidaymakers on Friday, Kobane burned yet again.

On Tuesday morning, 172 injured Syrian victims, including 40 children, were still languishing with bullet and shrapnel wounds in the Suruc public hospital. The tiny hospital has been overwhelmed in the last three days and medical staff have worked three sleepless nights as the hospital’s nine ambulances ferry the victims fleeing Kobane across the border.

Waiting on the hospital grounds to take home his injured brother, who was shot in the leg during the massacre, was labourer Lazgin Endowi, 24. He recalled scenes of pandemonium as he tried to escape his assailants and get his family to safety.

His 20-year-old sister was killed in the attack, while another sister also lay injured at a separate hospital further east in Sanilurfa.

He said he woke to the sound of a large explosion and like many of his neighbours, came out into the street to investigate. As the group stood in the street, he said he saw 10 to 12 gunmen, dressed in Kurdish People's Protection Units (YPG) uniform approaching.

Initially, he recalls expressing relief at the sight of what appeared to be Kurdish forces.

“Then they calibrated their weapons and opened fire randomly on the people,” Endowi said. “They were just metres away.”

The Kurds managed to wrest back control of Kobane in January, following a four-month, hard-won battle between IS and Kurdish forces of the YPG, backed by American airstrikes. Since then, the YPG have managed to push IS even further south and have retaken chunks of land to cut off vital IS supply routes, with many analysts believing the Kobane assault to be a response to the advance.

It has now emerged that the IS militants disguised themselves as Kurdish forces to sneak into the city, even going as far as shaving their trademark long beards, in a calculated deception to enter the residential areas of Kobane.

“I started running, and I could hear them shooting after me,” Endowi said.

“My neighbour - he was just 14 or 15 - was running beside me. He said he thought he was wounded and when I looked at him he was covered in blood. He died.”

Taking refuge in a nearby garage with dozens of others, Endowi then made a perilous journey back to his house, where his parents and injured siblings waited, terrified, for an ambulance.

“There was no one on the streets, only corpses,” he said.

Azat Muhammet, 21, a member of the YPG resistance forces, was also woken around 6am at his rooftop station in the city.

“One of the neighbours fired four shots in the air and said IS had come back ... I started to run and almost fell off the roof, I was so afraid,” he recalled.

“I ran back to the house to get my weapon, because I wanted to resist.”

On his way back to the same garage where others were gathering, Muhammet said he managed to fire off about 10 bullets before he himself was hit in the shoulder.

“They were just 15 metres away. They were wearing YPG uniforms. They didn’t say anything,” he said.

“Most of my neighbours were slaughtered.”

Many of Suruc’s new inhabitants are too afraid to return.

For new mother, Birevan, who lost dozens of neighbours and a cousin in the assault, the prospect of returning now remains distant, despite being separated from family inside.

Speaking to her brother-in-law, a medic in Kobane, over the phone, she heard his account of running from IS sniper fire to the hospital in Kobane, where the injured were piling in.

“My friends called me and told me to get to the hospital. As I came out, there was a wave of bullets behind me,” he said.

“Most of the casualties were civilians. They had gunshot wounds, mostly to the head and abdomen.”

In the wake of the massacre, YPG forces have deployed in greater numbers in the streets of Kobane, but the fear of another attack lingers. Residents fear the presence of IS sleeper cells, with at least four IS militants captured in the city days after the assault.

One IS fighter was killed by a mob of Kurdish civilians in retaliation for the massacre, before YPG forces could arrest him, after he was discovered trying to leave through the southern entrance. Pictures of his hanging body, with crowds of people surrounding him with camera phones, were seen by Middle East Eye.

Kurdish activist Mustafa Bali, speaking by telephone from Kobane, said tensions remained high in the city and said there were fears of further retaliatory attacks by Kurds who might lash out against Arab refugees from other IS-dominated areas like Raqqa.

“There is a wave of anger,” he said. “The atmosphere of revenge is dominating the city.”

“By the third day the situation was pretty much under control, but there is still concern that there are still some IS fighters hiding here.”

Adding to tensions has been growing speculation that the Turkish government is mulling military intervention in Syria to create a buffer zone along the southern border - not to protect against IS, but to prevent the formation of a Kurdish statelet on it’s southern border.

In a fiery address on Friday, coinciding with the massacre against the Kurds in Kobane, Turkey's President Recep Tayyip Erdogan accused Syrian Kurds of ethnic cleansing and said: “We will never allow the establishment of a state on our southern border in the north of Syria.”

Activist Bali, like many other Kurds in Syria and Turkey, believes the Turkish government is actively supporting IS.

“Big problems will take place inside Turkey itself if the president dared take such a decision,” he said.

The result, he said, would be armed conflict between Kurds from the YPG and the Turkish army inside Syrian territory.

“We don’t need any more evidence or proof that Turkey has allowed IS fighters to cross into Syria from Turkey,” he said

“They would not dare make this decision." 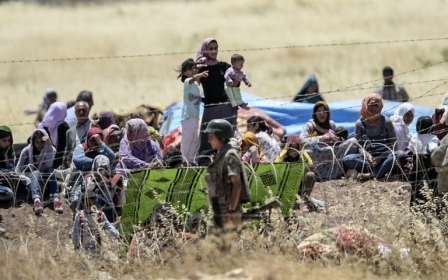 Islamic State
IS kills 146 civilians in assault on Syria's Kobane