'There was a time that I never thought I would see a pro-Kurdish party enter parliament,' a Kurdish voter tells MEE. DIYARBAKIR, Turkey - One autumn morning in 1994, the Turkish army came to Musa’s village and evicted him and his family, forcing them to leave without any of their belongings. He was one of thousands of Kurds displaced after the army burned their villages to the ground.

The army’s motivation for this brutal tactic was to eliminate all possible hide outs for the Kurdistan Worker’s Party (PKK) and collectively punish those who supported their armed rebellion.

Twenty-one years later, with the peace process still on hold, Turkey’s Kurds have achieved the political platform for which they’ve been longing. On Sunday night, the pro-Kurdish People’s Democratic Party (HDP) received 13 percent of the national vote, 3 percent more than they needed to enter parliament.

When the news was announced, celebrations spread rapidly throughout the city of Diyarbakir, considered the capital of Turkey’s Kurdish population.

“There was a time that I never thought I would see a pro-Kurdish party enter parliament,” Musa told MEE after viewing the election results on his phone. “We just want to be free from persecution.”

Gathering outside Diyarbakir’s old city wall, locals waved HDP and PKK flags proudly in the air. And in between blasts of fireworks launched into the sky, chants for HDP and Abdullah Ocalan, the imprisoned leader of the PKK, could be heard.

HDP’s entry into parliament prohibits the former ruling Justice and Development Party (AKP) from pushing to move the country from a parliamentary system into a presidential one, a change that would have given President Recep Tayyip Erdogan more direct control over the country’s legislative, executive and judiciary branches.

But while their success at the polls has curtailed Erdogan from gathering power, it also brings renewed hope to Kurds who have suffered for decades from state repression.

The PKK, established in 1978, emerged during an era of great political turmoil when Kurds had no political platform to address the harsh repression they faced. Anyone who spoke out about the Kurds or the “Kurdish problem” was charged with separatism by the state.

After the military coup in 1980, the state outlawed the use of Kurdish languages and discussion of Kurdish issues and required any party to acquire at least 10 percent of the national vote to enter parliament — a threshold imposed that barred Kurds and others from the political arena.

“We never wanted to fight,” said Mehmet Shimshae, HDP’s tourism minister. “But we were forced to.”

After years of candidates, now aligned with HDP, running as independents, surpassing the threshold on Sunday has legitimatised HDP’s presence in parliament more than ever had before.

“We finally have a real voice,” said 40-year-old Abdurahim, as cars honked and raced by him in celebration. “For many of us, we feel we have honour in this life.”

But for those trying to lobby for the release of their relatives from Turkish prisons, many are hopeful, but uncertain of HDP’s increased political leverage.

Five years ago, Sada, a 21-year-old Kurdish man from Diyarbakir, saw his cousin for the last time, just before he joined the PKK. A year later, his cousin was arrested in the mountains and sentenced to life in prison.

“Only HDP can do something for people like my cousin,” Sada told MEE, moments before election results were announced. “I believe that only they can resume the peace process.”

PKK-affiliated prisoners have often endured harrowing abuse at the hands of prison guards.

According to a report released by the Diyarbakir Bar Association in 2013, prisoners in Turkey’s Kurdish provinces are exposed to physical violence, threats and sexual abuse. A group were dragged on the floor and locked into ventilation units for hours. Many more are kept in prison for far beyond the length of their sentence.

“We don’t want to take up arms anymore,” said Sada. “But we also want to be able to see our family again.”

While HDP played a vital, mediating role during peace talks held since 2013, their demands for the amnesty of political prisoners didn’t receive enough traction.

In September 2013, Erdogan declared that PKK-affiliated prisoners would never be released. But now with HDP’s entry into parliament, families hope that the pardon of their relatives can be a principal requirement for any future peace agreement.

Abdulla, a 50-year-old Kurdish parking lot owner, said his cousin was unlawfully sentenced to life in prison. After four officers were killed by the PKK in 1991, officers arrested his cousin for being the relative of a guerrilla member and charged him with murder.

“Now that HDP has entered parliament, we have a chance to see our relatives again,” Abdulla told MEE while lighting a cigarette in his parking lot. “We have a chance for peace now that Erdogan isn’t in power.”

For the first time in 13 years, AKP will have to form a coalition to establish a government. If one isn’t formed within 45 days, the Supreme Election Board (YSK) will announce early elections after two months.

The Republican People’s Party (CHP), the ultra-right Nationalist Movement Party (MHP) and HDP have all declared that they will not make a government with AKP.

But if one does emerge, the most likely scenario is an AKP-MHP alliance. For such a coalition, Erdogan would have to curb his involvement in his party’s political affairs. As the president of the republic, he no longer heads the AKP and his status is largely symbolic compared to the duties of the prime minister.

An AKP-MHP alliance could undermine the peace process since MHP considers any negotiations with the PKK as an act of treason.

However, an AKP-MHP coalition looked unlikely after the MHP’s leader Devlet Bahceli said on Sunday that he had ruled out partnering with AKP.

"MHP is ready to be a main opposition party in a possible AKP-CHP-HDP coalition," Bahceli told reporters on Sunday.

Another scenario is that CHP and MHP form a coalition that’s also supported by HDP. While this alliance would be short lived, together these parties would lower the 10 percent threshold and strengthen civil institutions before early elections are held.

While the root of the Kurdish problem remains the same today as it’s always been, Turkey’s Kurds have found hope in the very political structure designed to exclude them.

Aydin, a 21-year -old victim that was severely hurt from the explosion in Diyarbakir two days ago, says that regardless of what HDP can achieve, he has faith that their voice will communicate the Kurds desire for peace.

“I knew we would pass the threshold,” he told MEE, while watching the celebration from the window of the hospital. “And regardless of what happens next, I know HDP will honour us in parliament.” 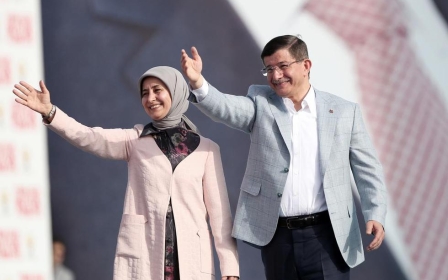