'This land is ours': Iraqi-Kuwait tensions rise in waterway row 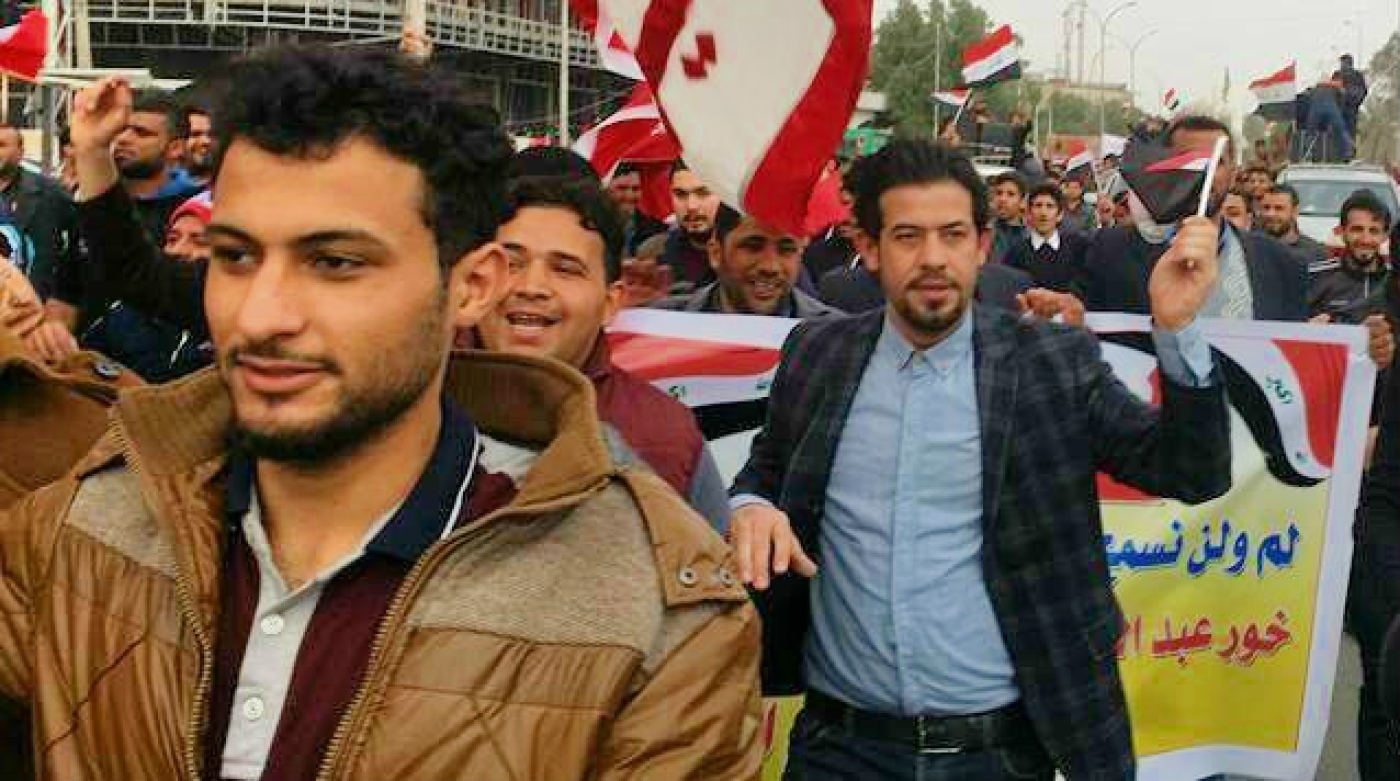 Iraqis in Basra, southern Iraq, protest against the transfer of the Khor Abdullah waterway to Kuwait (MEE/Nazli Tarzi)
By
Nazli Tarzi

"We were stunned to see the Kuwaiti flag fluttering in the creek of our waterway,” a shipping agent in Basra said, referring to the port that separates Iraq from its southern neighbour.

The sighting two weeks ago coincided with the leaking of documents that critics say effectively bestow the rights of Iraq’s Khor Abdullah waterway on Kuwait.

But Abadi's seal of approval has done little to stem the rising tide of anger in his country.

In response to mass public demonstrations in southern Iraq, Kuwait's national assembly announced a closed session to revisit the dispute on 14 February.

Under Maliki, a string of bilateral agreements with Kuwait regulated use of the border canal.

What these deals do not outline or sanction, however, is the transfer of Khor Abdullah.

Civil society figures and politicians have blamed not just Maliki but also Abadi for endorsing a deal still veiled in secrecy.

A former marine pilot from Basra, who spoke to Middle East Eye on condition of anonymity, described the deal as "treasonous" and lacking "legitimacy in the form of popular consent, paperwork, and judicial oversight”.

"Those responsible for the 2013 maritime deal are suddenly silent," he said.

What is Khor Abdullah?

With the exception of a small stretch of disputed land in its south, Iraq is a landlocked country bordering Kuwait to the west and Iran to its east.

Khor Abdullah is a narrow channel that separates Iraq from Kuwait.

At the head of the channel is the Iraqi dry cargo port Umm Qasr, which is Iraq's only entrance to the Gulf.

Khor Abdullah separates Kuwait from the more well-known Shatt al-Arab, a river that lies between Iraq and Iran. 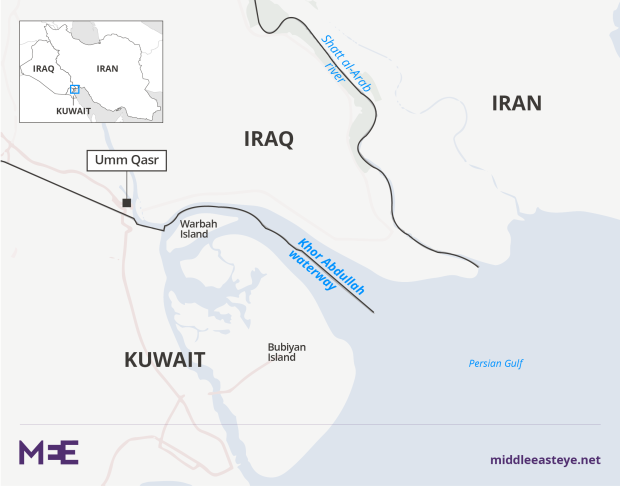 The Shatt al-Arab is formed by the convergence of Iraq's Tigris and Euphrates rivers. It acts as a river boundary separating Iraq and Iran, much like Khor Abdullah separates Iraq and Kuwait.

Disputed ownership of the Shatt al-Arab, known as the Arvand Rud in Iran, was a frequent cause of dispute between Iraq and Iran and a key battleground in the war between the two countries from 1980 to 1988, showing the importance Iraq attaches to its access to the sea.

The current disagreement, however, is over Khor Abdullah. The border channel has been in dispute since the early days of modern-day Iraq and Kuwait, states whose boundaries were determined on various occasions by the British Empire.

As Iraq’s only entrance to the Gulf from Umm Qasr, Britain - and the Ottomans before them - recognised Khor Abdullah as part of Iraq’s territorial waters.

Today it serves as Iraq's maritime lifeline, handling 80 percent of its national imports.

‘This will be a very hot potato’

In an interview with MEE, maritime specialist and international lawyer Pierre-Emmanuel Dupont spoke of the complexities of demarcating the frontier.

"The separating line is yet to be physically marked, illustrated or cartographically represented in contemporary maps," he said.

"Legally speaking, the dispute is not subject to maritime laws or international laws of the sea,” he said. "As an estuary, it falls under the jurisdiction of the state.”

After Saddam Hussein’s invasion of Kuwait in August 1990, the estuary "fell under the mandate of the United Nations, under Resolution 833,” Dupont said.

A UN official quoted by the Times at the time said "this will be a very hot potato... It could lay the ground for more conflict,” adding that "Iraq's access to the Gulf could well end up depending on Kuwaiti magnanimity".

In 1993, the Security Council appointed a UN commission with the task of redrawing the boundaries of the countries, but its work was undermined by accusations that it had overstepped its mandate.

In recent years the dispute has played itself out in port construction, with both states racing to build rival megaports.

Kuwait has succeeded in constructing the $1.6bn port of Mubarak, while endemic corruption has stalled Iraq's $4bn Fao project.

During a vote to ratify the handover of Khor Abdullah, Iraqi lawmakers blasted Abadi’s government for yielding Iraq’s sovereignty.

In a recent interview with Iraqi TV, former judge and independent Shia politician Wael Abdel Latif al-Fadel said the decision violated the rights of Iraqis who "for the last 70 years have been responsible for modernising the port, its use and navigation, monitoring offshore drilling and environmental protection."

The interview took place on the NRT news channel, which has ties to the Kurdish Regional Government.

Hanan Fatlawi, an MP from the pro-Maliki State of Law Coalition, also rebuked Abadi in a news conference for failing to protect Iraq's "existing and future generations".

"Khor Abdullah - no different to any inch of Iraqi territory - is not state property to be gifted," she said.

The State of Law Coalition is the largest bloc in the Iraqi parliament, but is not part of Abadi’s government.

The hashtag "Khor Abdullah is Iraqi” went viral on Iraqi social media as citizens joined in on the snowballing campaign.

Qais al-Khazali, commander of the Shia militia Asa'ib Ahl al-Haq, even joined in on the campaign.

Translation: #Khor_Abdullah_is_Iraqi, and will remain Iraqi

Activist Qassim al-Hayati posted a video online using spoken word to contest the handover and shame the government: "It's time to awake from your slumber," he said, addressing parliament.

"You sold our land, our water, what next? Our shrines, our civilisation?" al-Hayati, a native of Basra, lamented in the clip that went viral in Iraq.

Meanwhile, the streets of Basra are into their second week of protests in an assertion of Iraq’s sovereign rights.

Basra, referred to by Iraqis as "the mouth that feeds the entire country", will be the hardest hit by the transfer of Khor Abdullah, since it is located in its province.

Civil society activists assembled in their hundreds around Basra’s provincial council headquarters and marched towards the canal.

The influential Sadrist movement, led by Shia cleric Moqtada al-Sadr, also took part in the demonstrations in Basra, a stronghold of the movement.

The parliamentary and clerical involvement has not been universally welcomed, however.

Zaidi comes from an activist family, his brother Mutadher having propelled himself to fame after throwing a pair of shoes at George W Bush in 2008.

Water war on the horizon?

Abadi's spokesman, Saad al-Hadithi, said the endorsement and ratification of the maritime agreement was approved by parliament in 2012.

The Iraqi government has made it clear that that without Kuwait's consent, Abadi cannot roll back the decision.

Kuwait, for its part, has denied accusations that it has violated Iraq's territorial sovereignty.

The country's deputy foreign minister, Khaled al-Jarallah, said updated maps needed to be drawn and posts laid down in accordance with Resolution 833.

Over the last decade, Amer Abd al-Jabbar, who was Iraq's transport minister between 2011 and 2014, has harboured suspicions of Kuwait's geopolitical ambitions.

During his first two months in office, Jabbar visited Kuwaiti officials urging them to halt the building of Mubarak port, which would block Iraq's access and ability to trade by sea.

In an interview with al-Ahad TV, Jabbar said that Maliki brought Hadi al-Ameri to replace him due to his opposition to Kuwait.

"The agreement in 2013 is not legally binding," he told the channel, which is affiliated with Asa'ib Ahl al-Haq and more specifically al-Khazali himself who funds it.

"The deal must be delayed, or abrogated immediately," Jabbar said, adding that it "was only signed for by Ameri as Iraq's transport minister at the time."

Jabbar and others have hit back against Kuwait for "deftly capitalising on the crisis of governance in the country.”

The Foreign Relations Bureau of Iraq (FRB-I), a London-based opposition group, issued a statement condemning they what they refer to as a "disastrous concession" that "guarantees future inter-border disputes and wars."

Translation: "#Khor_Abdullah_is_Iraqi. The tribes of Basra prepare for the great uprising.”

"FRB finds no legal justification that validates the sale of the country’s most prized waterway," the statement said.

The dangers facing Iraq once the 2013 deal is ratified and enforced are potentially enormous, limiting Iraq's development and trading capacity.

In the words of one protester: "Nothing will set Iraq back more than the sale of our Khor Abdullah."