A group of judges in Tunisia announced a strike on Thursday in protest at a new law which they say threatens the independence of the judiciary.

In a statement posted to its Facebook page, the Tunisian Association of Judges called a new bill giving greater powers to the executive to appoint judges “unconstitutional”.

The announcement came as a seperate strike by thousands of Tunisian lawyers entered its third day on Wednesday, with continued protests over police abuse and unaccountability from the judiciary.

A fierce conflict between lawyers and judges centered on who is allowed to ascend to Tunisia's highest judicial authority, the High Council of Judges, has intensified in recent months, sometimes spilling over into physical confrontations.

The lawyers began their strike on Friday after a lawyer, Mahbouba ben Farah, was allegedly assaulted by police officers in the eastern city of Sfax.

Mohamed Fadil Bin Mahfouz, head of the National Authority of Lawyers, said lawyers were angry at attempts by judges to exclude them from the judicial scene.

The Union of Tunisian Judges, Tunisia’s other major judicial body, organised a strike in February in response to an alleged physical assault on a judge by a group of lawyers, who had been protesting outside the judge’s office in response to the imprisonment of a lawyer over claims of financial misconduct.

At the time, Raoudha Karafi, the president of the Tunisian Association of Judges, claimed that the judge in question was “nearly lynched” and “could have died.”

“Lawyers, who should be setting an example, will make citizens lose belief in justice,” she said.

President of the Bar Association Mohamed Fadhel Mahfoud said during a sit-in on Monday that the strike comes after recurrent attacks against lawyers, undermining their role in the judicial system . Mahfoud warned of security forces’ impunity when assaulting lawyers, emphasizing that Article 105 of the Tunisian constitution declares lawyers as an integral part of the judiciary. - See more at: http://www.tunisia-live.net/2015/03/10/tunisian-lawyers-start-a-week-long-protest/#sthash.KO2szLxt.dpuf

In May 2013, judges in the Northwest town of Beja went on strike after lawyers reportedly attacked judges in the town’s Court of First Instance.

The two groups did unite, however, in protest over the death of the left-wing activists Chokri Belaid and Mohamed Brahimi. 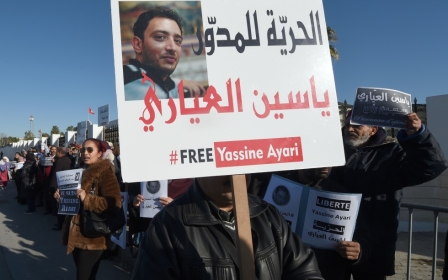