At least 16 more people have died of starvation in the besieged Syrian town of Madaya since an aid convoy entered earlier this month, according to Doctors Without Borders (MSF).

Several dozen more residents of the town are in "danger of death" because of severe malnutrition, the humanitarian group warned.

The latest deaths bring the number of people reported to have died of starvation in Madaya to 46 since December, according to MSF.

But the medical charity said the real toll could be even higher.

"MSF has clear medical reporting for 46 starvation deaths since December 1," the group said in a statement to AFP.

"The real number is almost certainly higher, as MSF is aware of reports of people dying of starvation in their homes."

Located in Damascus province, Madaya is under government siege, and its fate has been one of the sticking points for fresh peace talks on the Syrian conflict that opened on Friday after delays.

Syria's opposition wants to see the implementation of UN Security Council resolutions demanding an end to sieges in the country before committing to new negotiations.

Madaya is one of four towns included in a rare deal last year that was intended to halt fighting and allow the entry of humanitarian aid.

But despite the deal, the UN and other aid groups have had only limited access to Madaya, along with rebel-held Zabadani, and the government-held towns of Fuaa and Kafraya, which are under opposition siege.

Conditions in Madaya have reportedly been among the worst, with about 42,000 civilians there surrounded by government troops who have laid mines around the town to prevent people leaving.

While the government has some ability to airdrop supplies to Fuaa and Kafraya, the opposition has no similar capacity, and aid groups have regularly urged continuous aid access to all four towns.

They have also called for the evacuation of those suffering malnutrition or sick with other illnesses.

Citing medics it supports in the town, MSF said there were at least 320 cases of malnutrition in the town, including 33 that were so severe that the individuals could die without prompt treatment.

A report by the Syria Campaign citing a local activist said that 200 people had also developed stomach cramps as a result of eating food delivered by aid agencies. The report said that the symptoms were caused by the consumption of beans and tomato paste which were hard to digest after a long period without food.

"It is totally unacceptable that people continue to die from starvation, and that critical medical cases remain in the town when they should have been evacuated weeks ago," said MSF's director of operations Brice de le Vingne.

"The warring parties responsible for these besiegement strategies need to allow unhindered medical and humanitarian access immediately," he added.

After the September deal for the four towns, an initial aid delivery was made, but no subsequent assistance was allowed in until 11 January, after reports of deaths in Madaya.

Additional convoys of food and medicine entered Madaya, Fuaa and Kafraya on 14 January, and then all four towns on 19 January.

Aid groups have said the piecemeal deliveries are insufficient.

The UN estimates around 486,700 Syrians are living under sieges imposed by the Syrian government, rebels or the Islamic State group.

The UN's aid chief said this week that 75 percent of its requests for aid deliveries in Syria went unanswered by the government.

Madaya has been a sticking point for Syrian opposition groups seeking to negotiate an end to Syria’s almost five-year civil war.

Initially, the main Syrian opposition group, the High Negotiations Committee (HNC), said it would not attend UN-brokered talks in Geneva this weekend until a list of demands, including relief for those under siege, were met.

They appeared to change their position on Saturday, emphasising it would focus on the topic of humanitarian relief.

"The HNC will go to Geneva tomorrow to discuss these humanitarian issues which will pave the way into the political process of negotiations," spokesman Salim al-Muslat told the Arabic news channel al-Arabiya al-Hadath.

Protesters in Geneva have attacked both the government of Bashar al-Assad and the UN for its failure to break the siege in Madaya:

There has also been anger at reports that the UN downplayed the extent of the suffering in Madaya at the request of the Syrian government. 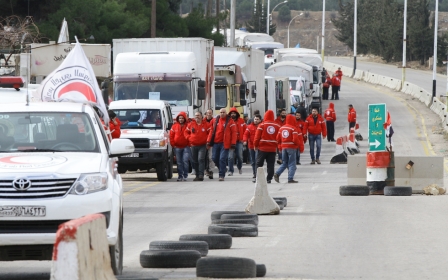