The Lebanese army opened fire with rifles at two of three Israeli drones that breached Lebanese airspace in the south of the country, two Lebanese security sources and local media said.

A security source told Reuters on Wednesday that Lebanese troops fired with their M16 assault rifles.

The first drone entered Lebanese airspace at 7:35pm local time (16.35 GMT) over the border village of Adaisseh, and returned to Israel after shots were fired, the Lebanese army said in a statement, as reported by Reuters.

The Israeli military said shots were heard from Lebanese territory towards an airspace where Israeli army drones were operating, Reuters reported.

"The drones completed their mission and no IDF damage was reported," the statement said, using an acronym for the Israeli army.

The incident comes only days after tensions escalated between Israel and Lebanon as a result of a series of Israeli incursions into Lebanese territory. Two Israeli drones crashed in Beirut on Sunday, and a day later, Lebanese state media reported that Israel carried out air strikes in Lebanon's eastern mountains, where a Palestinian faction has military posts.

The Popular Front for the Liberation of Palestine - General Command (PFLP-GC) said the raid was conducted by Israel and it responded with anti-aircraft fire.

"What happened was similar to a declaration of war which allows us to resort to our right to defend our sovereignty," Aoun's office quoted him as saying on Twitter.

Nasrallah warned Israel that further incursions into Lebanese territory would be met with force.

"The time when Israeli aircraft come and bombard parts of Lebanon is over," he said on Sunday.

"I say to the Israeli army along the border, from tonight be ready and wait for us," Nasrallah added. 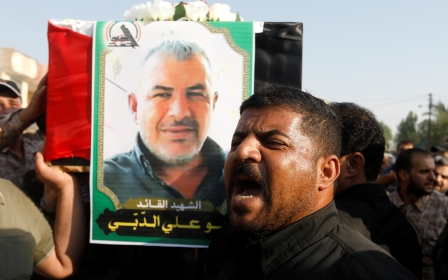