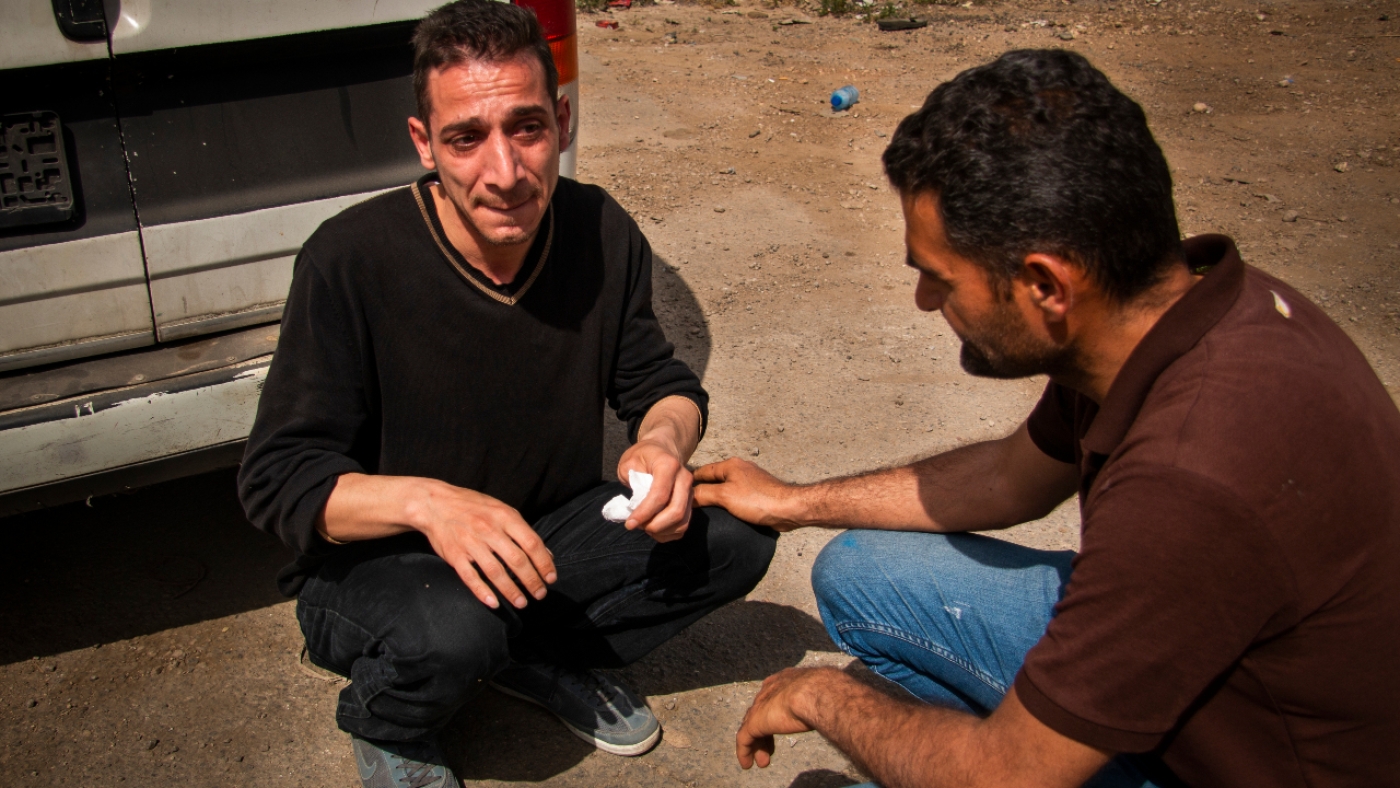 Ahmad Sabsabi, left, from Aleppo, Syria, says he takes some consolation from his faith after losing his wife and all three children in the same incident (MEE/Sally Abou AlJoud)
By
Sally Abou AlJoud
in
Tripoli, Lebanon

For a week after the shipwreck, Rabih Jamal piloted a rented boat through Tripoli's waters in slow, overlapping strips, scouring northern beaches and the Palm Islands and looking for traces of his mother, sister, wife, daughter and son. But to no avail.

All five members of his family went missing at sea on 23 April when their overloaded smuggling boat capsized about 5.5km off Lebanon's coast, in addition to friends and distant relatives who also remain unaccounted for.

On that fateful day, Jamal had placed his children, Remas, six, and Yusuf, four, on deck, as the sun melted on the horizon, illuminating the sea that was soon to engulf his young ones.

As a serving soldier in the Lebanese army, Jamal knew he would be unable to join his family, so he reluctantly bid them farewell and wished them a safe passage.

These would-be asylum seekers were drifting away from Lebanon's unrelenting troubles and heading for Europe. Their departure point was the impoverished coastal town of Qalamoun, just south of Tripoli. Their destination was Italy, more than 3,000km away.

Tragically, they would never make it.

According to the UNHCR, the United Nations refugee agency, the overpacked boat was carrying around 84 passengers, of Lebanese, Syrian and Palestinian origin.

The Lebanese armed forces say 48 people have been rescued and six bodies recovered since the incident, which would leave around 30 people unaccounted for. The circumstances of the sinking are still not entirely clear. Some of the survivors took to TV stations and social media to accuse the military of insulting passengers aboard the ship, before deliberately ramming it, cracking its hull.

The Lebanese government, in an emergency session, "tasked army command with conducting a transparent investigation into the circumstances behind the incident under the supervision of the relevant judicial authority," said Information Minister Ziad Makari.

Given the accusations that the navy might have played a role in the sinking, some have pointed out the absurdity of the military investigating itself.

Despite the tragedy, scores of people are still attempting to make the illicit sea crossing as the acute political and economic crises only increase desperation.

On 29 April, a patrol from the Lebanese Intelligence Directorate prevented a boat with around 85 people on board from leaving Tripoli's coast. The patrol arrested five people suspected of being people traffickers, and said that the smugglers had taken $450,000 from would-be migrants to buy and equip the boat for the trip.

On the same day, the Internal Security Forces (ISF) said they had arrested two men, a Lebanese and a Syrian, who admitted they were seeking to smuggle 23 Syrians on a boat headed for Cyprus. Each migrant had paid the smugglers $3,000, according to the ISF.

Meanwhile, the families of the victims of the Tripoli incident have formed a committee to communicate with the army commander and Prime Minister Najib Mikati.

The committee is also planning to protest against what it says is the government's inaction by disrupting the proceedings of the 15 May parliamentary elections in Tripoli and closing off polling centres in Danniyeh, a region east of Tripoli.

"I was not worried about them. I was in a state of peace when they took off," Jamal told Middle East Eye, his words sticking in his throat.

"I sent them off because necessities of life no longer exist in this country.

"We don't even have a home. I wanted them to have a good education, and I can't pay for their schools here anymore. Their schools were demanding more money as the [US] dollar keeps shooting up."

Lebanon's inflation-battered currency has lost more than 90 percent of its value since the start of the country's unprecedented three-year economic and financial meltdown, one of the world's worst-ever economic crises, according to the World Bank.

The financial crisis, coupled with Lebanon's long-running socioeconomic and political problems, has pushed around 80 percent of the population into poverty and driven thousands to leave the country. But not everyone has the privilege of leaving the legal way.

Jamal was having a telephone conversation with his wife as her boat sailed smoothly across the sea, away from the Lebanese coast. She was reassuring him that she and the rest of the family were safe.

Jamal also wanted to make sure his father, Yusuf, 55, who suffers from heart disease and was also on board, was OK.

"He takes 10 medications which I no longer can afford to get him," Jamal said. "When I asked about him on the boat, they told me 'he lit a cigarette and is enjoying the ride'."

Yusuf survived the sinking, along with another of his sons, but lost the family's women and children that evening - Jamal’s mother, Hind, his sister, Lilian, his wife, Hanan Mereb, along with Remas and Yusuf. Jamal's wife's pregnant sister was also making the journey and remains lost at sea.

'They are with God now'

Ahmad Sabsabi, from Aleppo, Syria, takes some consolation from his faith after losing his wife and all three children in the same incident while he survived.

"I left for my kids so that they can live a decent life, so that if they ever ask for something, I would be able to provide it. I wanted to secure a good education and future for them."

Eight-year-old Masa, Hammoudi, six, and Jad, four, were huddled with their mother, Riham Dawaleebi, inside the boat's cabin, where, according to Sabsabi, most women and children were seated because it was reckoned it would be safer for them compared to being on deck.

"We thought men are braver, they can stand outside," he said.

This thinking proved tragically wrong. Just before the boat capsized, water started seeping into the cabin, trapping the women and children inside. Many of them were not wearing life jackets.

"People who were sitting inside are still missing," Sabsabi said. "They were mostly women and children. Every woman had several children with her.

"My wife was with our three kids. Another woman was with two kids. There were a few babies inside as well."

The tragedy took place during Ramadan, so most people on board were fasting. They broke their fast after the boat departed, as the sun was setting; they drank water and ate dates and manakish, a common Levantine food consisting of dough topped with zaatar and cheese.

They had packed plenty of food and clothes for the trip. Sabsabi was online with his brother and mother-in-law, keeping them updated on the boat's progress. He told them not to worry if they couldn't reach him after a while as he might lose reception once they'd left Lebanese waters.

Sabsabi talks about having suicidal thoughts over his unimaginable loss. He'd fled to Lebanon when the Syrian civil war broke out and hadn't been able to return since.

"All of my kids were born in Lebanon," he said. "I can't go back to Syria as I am wanted there. I would be murdered immediately. It's extremely dangerous for me in Syria." As to the fatal moments, "I was the last one to leave the boat before it sank," Sabsabi said. "It took three or four seconds for the boat to go down. The eye could not process how fast it happened. And they were still inside. They are all gone.

"My tears won't dry. I see my family everywhere I walk. I see them when I'm looking at the sky, or down at the ground. They went to God; I was very kind to my family and gave them warmth, but God will be kinder with them and will give them things I wasn't able to give."

Sabsabi has been staying with his in-laws, mourning their loved ones. He said no one has reached out to them with any information about his wife and children.

Despite the tragedy, Jamal still plans on fleeing Lebanon, no matter what means of transport he has to take. He hopes that he might find the bodies of his family members so he can bury them before he leaves.