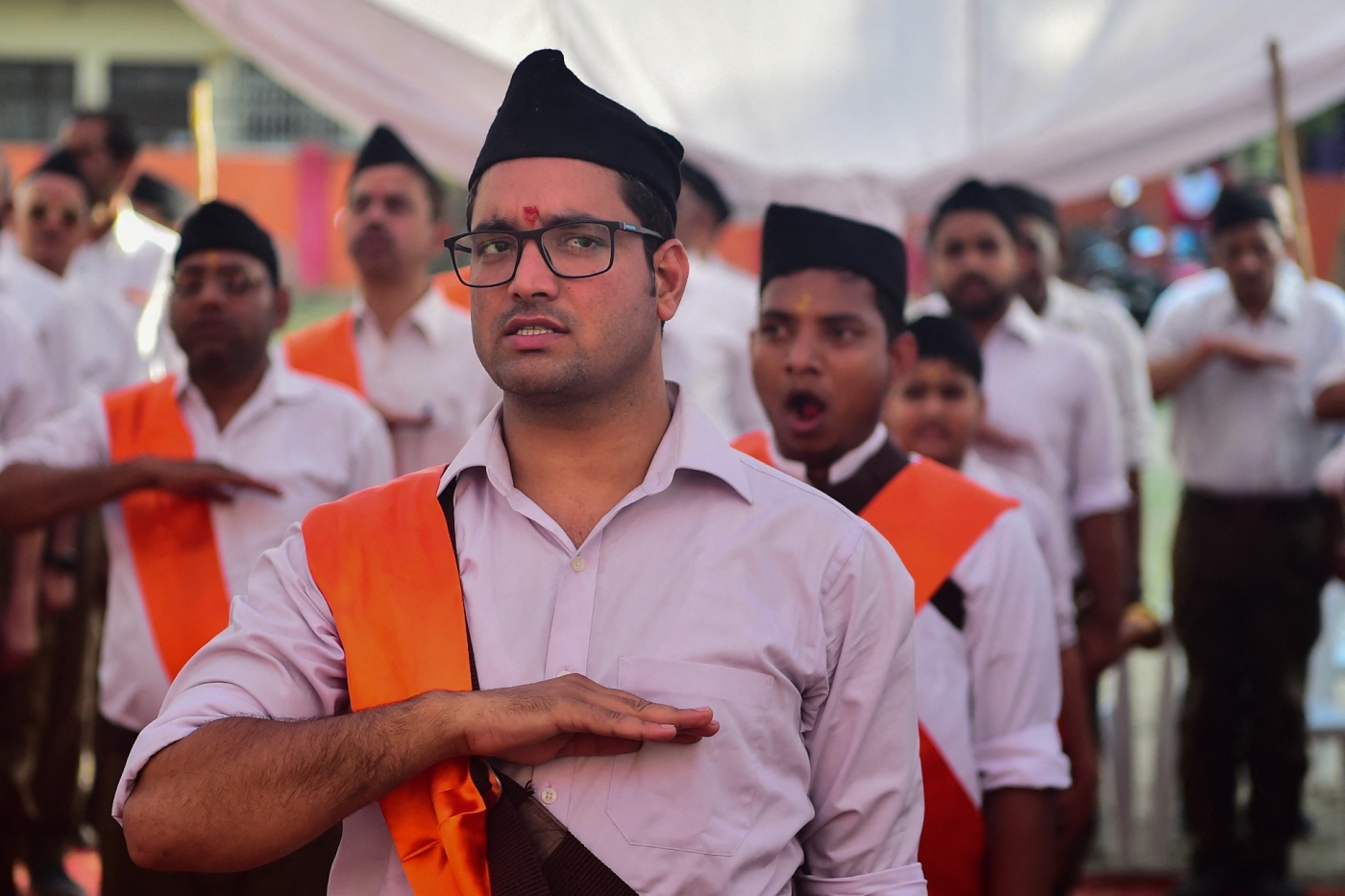 Police have been deployed on the streets of Leicester to deter clashes between groups of young men that have sharpened tensions between Hindus and Muslims in one of the UK's largest British-Indian communities.

The recent violence has been partly blamed on “far-right Hindutva groups”, including the Rashtriya Swayamsevak Sangh (RSS) paramilitary organisation, which have been accused of targeting Muslim residents and seeking to sow discord in a mixed community that has co-existed for decades.

Leicester is one of the most diverse cities in the UK, with people who identify as British Indians, both Hindu and Muslim, making up more than a quarter of the total population of 329,000, according to figures from the 2011 UK census.

At least 47 arrests have been made and two people were jailed in relation to the unrest, which the Muslim Council of Britain said followed a "series of provocations" from far-right Hindutva groups over a number of months. Leicestershire Police's chief said arrests would continue for "several weeks if not months."

How did Hindutva, a political ideology originating in the early 20th century under British colonial rule in India, come to impact social and religious cohesion in the English Midlands almost a century later?

Middle East Eye takes a look at the origins of the movement, its early affinity with European fascism, and how its paramilitary proponents came to dominate Indian politics and export their ideology across the globe.

The term Hindutva was first coined in 1892 by Bengali scholar Chandranath Basu, to describe the state or quality of being Hindu, or "Hindu-ness".

It took on its contemporary meaning, as that of a political ideal, in a 1923 essay by Indian activist Vinayak Damodar Savarkar.

In a paper titled “Hindutva: Who is a Hindu?” Savarkar, who described himself as an atheist, wrote that “Hindutva is not identical with what is vaguely indicated by the term Hinduism.”

He sought to separate the term from “religious dogma or creed,” and instead link the idea of Hinduism with that of ethnic, cultural and political identity.

Savarkar posited that to Hindus, India was both a “fatherland” and a “holy land”, distinguishing them from non-Hindus, for whom it was the former but not the latter.

“Their holy land is far off in Arabia or Palestine. Their mythology and god-men, ideas and heroes are not the children of this soil. Consequently their name and their outlook smack of a foreign origin,” he wrote.

The polemicist’s definition of Hindutva would go on to form the basis of Hindu nationalist political ideology.

It would be utilised by the RSS group, India's ruling Bharatiya Janata Party (BJP), and other organisations in the Sangh Parivar right-wing Hindu nationalist umbrella grouping.

The RSS and fascism links

The RSS, which has described itself as the world’s largest volunteer organisation with around six million members, is the main vehicle through which Hindutva ideas are spread.

It was founded in 1925 by physician Keshav Baliram Hedgewar as a movement against British colonial rule and in response to Hindu-Muslim riots.

Hedgewar, heavily influenced by the writings of Savarkar, set up the RSS as a group dedicated to protecting Hindu religious, political and cultural interests under the “Hindutva” banner.

Though it supported independence, it is not believed to have played any significant role in the fight for freedom from British colonial rule.

Hedgewar was highly critical of the Congress Party, India’s main independence movement, for both its diversity and its political hierarchy. Instead he modelled his RSS members as uniformed, equal volunteers, who practised their discipline with daily exercise and paramilitary training drills.

After Hedgewar’s death in 1940, Madhav Sadashivrao Golwalkar took charge of the RSS group.

Golwalkar, one of the ideological architects of the RSS, took inspiration from European fascism, including Nazi Germany.

In his 1939 book We, or, Our Nationhood Defined, Golwalkar said: “To keep up the purity of its race and culture, Germany shocked the world by her purging of the country of the Semitic races - the Jews. Race pride at its highest has been manifested here… a good lesson for us in Hindustan to learn and profit by.” The RSS has since distanced itself from the book.

Earlier this year, a teacher in Uttar Pradesh was suspended for posing the examination question: “Do you find any similarities between Fascism/Nazism and Hindu right-wing (Hindutva)? Elaborate with the argument.”

It’s a subject that was meticulously researched by Italian historian Marzia Casolari, who in her book In the Shadows of the Swastika utilised archives from Italy, India and the UK to outline the relationship between Hindu nationalism and Italian fascism and Nazism.

Hindutva figures have been linked to extremist right-wing European figures in more recent years too: Norwegian mass murderer Anders Breivik hailed the Hindu nationalist movement as a “key ally to bring down democratic regimes across the world”, listing the websites of the RSS and BJP among others.

In 1948, the RSS was banned by the Indian government after one of its members, Nathuram Godse, assassinated anti-colonial hero Mahatma Gandhi.

The RSS said he was a rogue extremist who had left the group by the time of the killing - something Godse’s own family members have since disputed.

A year later, the ban was lifted and an official investigation absolved the group of involvement in the assassination. Since then the group has recovered to become one of the biggest forces in Indian society.

It gained particular prominence in the 1980s after calling for a Hindu temple to be built over the Babri mosque - a 16th century Muslim place of worship in Ayodhya - because it believed the Hindu god Ram was born there.

The mosque was destroyed by Hindu extremists in 1992, and subsequent riots, allegedly spurred on by RSS "foot soldiers", resulted in the death of around 2,000 people, mostly Muslim.

The group gained popularity following the incident, as did the BJP - often referred to as the political wing of the paramilitary movement - which subsequently won parliamentary elections in 1996 and 1998.

In 2002, extreme Hindutva nationalist groups belonging to the Sangh Parivar coalition were blamed for instigating the Gujarat riots, which saw some 790 Muslims and 254 Hindus killed. The then chief minister of Gujarat, Narendra Modi, was accused of failing to stop the violence. He was banned from entering the UK and US on that basis - a boycott which has since been reversed.

Modi, who has been Indian prime minister since 2014, is a longtime RSS member.

Following his re-election to office in 2019, a study found that of 53 ministers from the BJP in Modi’s government, 38 had an RSS background (71 percent). That share had risen from 61 percent in his first term.

That influence can be seen in policy areas such as education, where RSS efforts have led to some Indian states teaching Hindu scripture as historical fact.

Exported around the world

Beginning as a 17-member cadre in Hedgewar’s living room in the Indian city of Nagpur, the RSS now boasts over 80,000 shakhas (branches), thousands of schools across India, and membership among nearly three quarters of government ministers.

It also has a presence around the world: its overseas units, known as Hindu Swayamsevak Sangh (HSS), are reportedly in 39 countries, including the United States, Australia and the UK.

While the shakhas abroad provide a means for community activities and charity, it has also been seen as a key vehicle - along with the Overseas Friends of BJP (OFBJP) - for mobilising votes for Modi.

As well as encouraging friends of family to vote back home, Hindutva adherents abroad have also been known to provide expertise and funding to help the BJP electoral machine.

They are also involved in organising high-profile mass rallies held by Modi during his overseas trips, such as the “Howdy Modi” event in Texas in 2019 which was attended by former US President Donald Trump and 50,000 others.

Earlier this month, Democratic Party officials in New Jersey accused Hindutva organisations of “infiltrating all levels of politics” in the US, including in efforts to successfully block a 2013 congressional resolution to warn against the Hindu nationalist movement.

The Hindu nationalist movement has sparked controversy in the UK too: in 2019, right-wing anti-Muslim activists targeted British Hindus with text messages urging them not to vote for the UK Labour Party, accusing it of being “anti-India” and “anti-Hindu”.

The scenes came just days after calls mounted for the UK government to ban a speaking tour by Modi ally and nationalist activist Sadhvi Nisha Rithambara. Organisers called off the tour on Friday, citing her ill health. 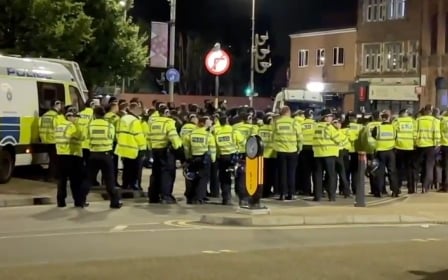 Hindutva
'It felt so close to civil war': When Hindu nationalism came to Britain
Peter Oborne 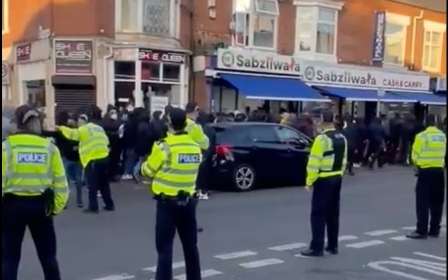 Islamophobia
Leicester riots: Are Muslims ever allowed to be victims in UK media?
Faisal Hanif 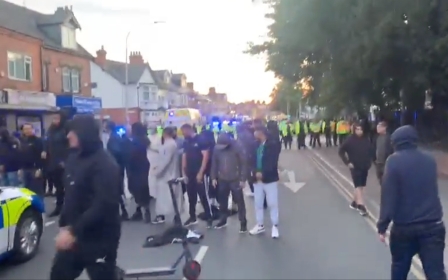