LGBT groups speak out against Trump's 'bigotry screening' for Muslims 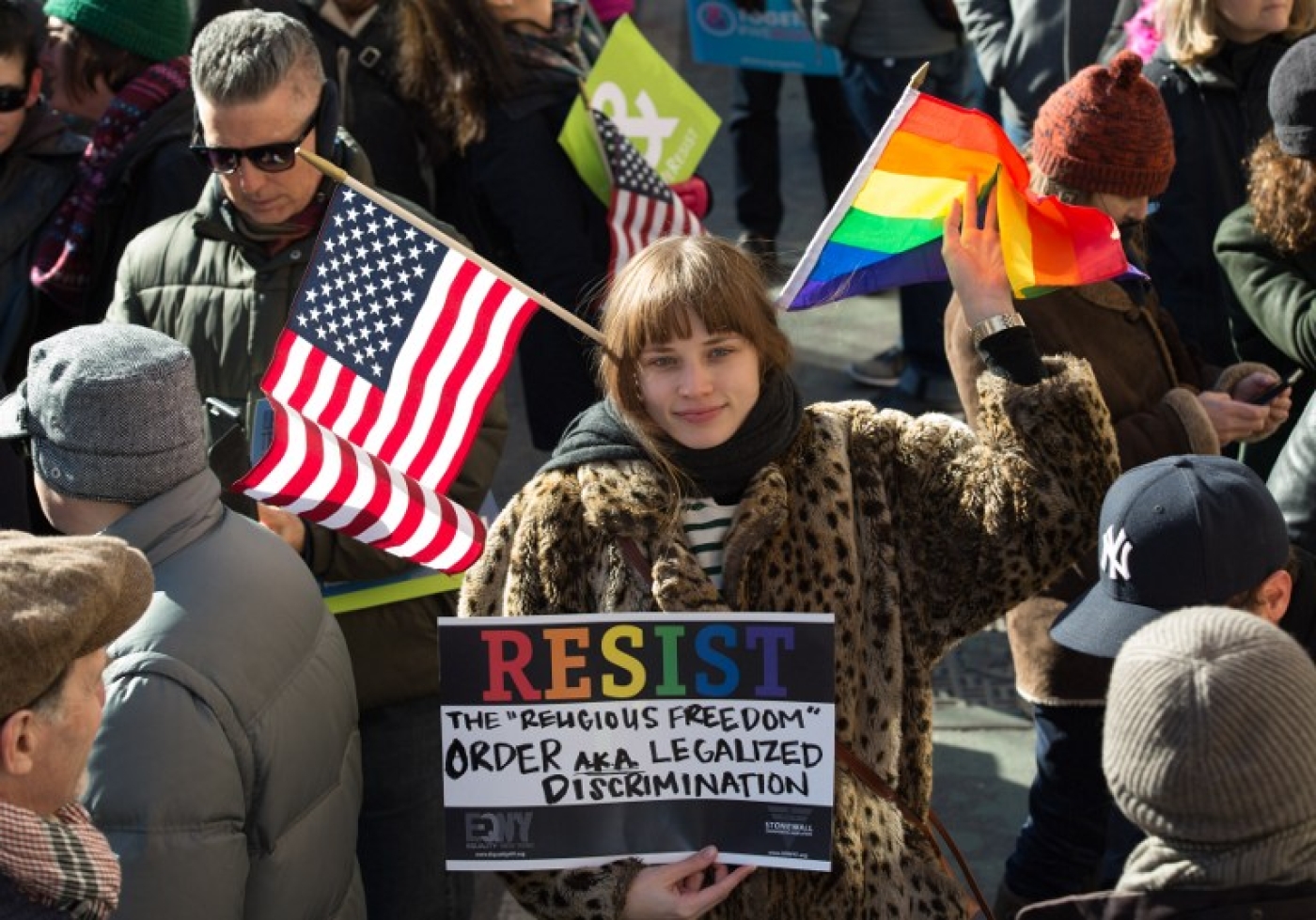 LGBT groups in the US have accused President Donald Trump of “concern trolling” over measures introduced to screen migrants for bigotry and negative attitudes to homosexuality which they say are intended to stoke discrimination against Muslims.

Outrage over Trump’s “Protecting the nation from foreign terrorist entry” executive order issued on 27 January has largely focused on the banning of visa holders from seven Muslim-majority nations, which has been temporarily halted by a federal judge in Seattle.

But the order also called for an overhaul of the screening process for migrants, and elsewhere stated that the United States would not allow entry to people who "engage in acts of bigotry or hatred or those who would oppress Americans of any race, gender, or sexual orientation".

Under new data-collection requirements, the Department of Homeland Security (DHS) must now also collate figures on the “the number and types of acts of gender-based violence against women, including honour killings, in the United States by foreign nationals”.

And while Trump claims to be a supporter of LGBT rights, community activists and advocacy groups say he is instead using that cause to stir up and legitimise anti-Muslim sentiment.

“LGBT people refuse to be pawns in Mr Trump's dangerous and inhumane game,” said Rachel Tiven, the CEO of the advocacy group Lambda Legal. “We utterly reject his discrimination against Muslims in the guise of concern trolling for LGBT rights.”

Trump’s apparent efforts to link issues such as gender-based violence and homophobia to Muslim immigration are not new.

Last June, after a gunman killed 49 people in gay nightclub in Orlando in an Islamic State-claimed attack, the then-presidential candidate attributed the deaths to the US's flawed immigration policy and called for more vetting of Muslim migrants.

“My administration will speak out against the oppression of women, gays, and people of different beliefs,” he promised.

Since his inauguration, Trump has continued to claim his support for LGBT rights. In a press statement last month, the White House emphatically disputed accounts that Trump would restrict protections for LGBT workers.

“The president is proud to have been the first ever GOP [Republican Party] nominee to mention the LGBTQ community in his nomination acceptance speech, pledging then to protect the community from violence and oppression.”

Yet Trump, who came to office amid numerous allegations of sexual assault and by securing the support of social conservatives, has hardly proven his commitment to gender equality or LGBT rights. A draft of a more sweeping anti-LGBT executive order was leaked by the Nation magazine late last week.

What is perhaps more surprising however is that Trump’s policy ideas and political strategy have not just been plucked from controversial figures on the American far-right like Frank Gaffney, a key Trump cheerleader who has called for Muslim migrants to be subjected to “ideological screening”.

When it comes to implementing restrictions on Muslim immigration based on perceived social values, Trump is actually drawing directly from policies that have been in place in liberal European nations for years.

Following years of economic austerity and deregulation, an idea that originated on the far-right – that Muslims pose a threat to Europe’s cultural norms – was adopted across the political spectrum.

Right-wing parties succeeded in coopting progressive issues to restrict Muslim immigration, including LGBT rights and gender equality, even as they sometimes simultaneously pursued legislation that undermined those causes.

When Muslim migration from Africa and Asia to Europe began in the decades after the Second World War, the new arrivals were understood first and foremost as members of the working class, Ferruh Yilmaz, an associate professor of communications at Tulane University and an expert on the politics of immigration in Europe, told Middle East Eye.

“Muslim-ness was just a colouring, but they were – at the end – part of the working class,” said Yilmaz.

That started to shift in the 1980s, as elected officials pursued neoliberal policies that dismantled the welfare state.

Anxiety about economic security ran high, said Yilmaz, and the far right sought to cast these tensions in cultural terms, by framing immigrants from Muslims countries as a threat to the nation’s resources and shared culture.

Over time, political crises continued to erupt over issues such as “honour killings,” pork meat, face veils, and segregated swimming pools. Centrist and even left-leaning political figures adopted the cultural framing about the threat posed by Muslim immigration.

In time, political leadership in France, Germany, the UK and elsewhere lambasted the failure of multiculturalism – and called for a more aggressive “integration” of Muslims into European society.

By the early 2000s, countries across Europe had begun to explicitly screen migrants for their views on cultural issues like nude bathing, homosexuality, forced marriage, and women leaving the home alone.

In 2006, the German town of Baden-Württemberg introduced a test for immigrants from “Muslim countries”, including one question which asked how they would react if they found out their son was gay. The Netherlands, meanwhile, began screening a video for immigrants that included images of bare-breasted women and men kissing.

Paul Scheibelhofer, a sociologist in Austria at the University of Innsbruck researching masculinity and migration, told MEE that questions of sexuality had long played a role in shaping European immigration policy.

People of colour, and especially men of colour, have long been demonised on the basis of their perceived sexual proclivities or cultural mores, he said.

“While the content of these racialised notions has shifted throughout history and different groups of men have been targeted,” Scheibelhofer explained, “the basic logic of the discourse remains quite stable: Non-white men are depicted as deficient and inferior and their masculinity as a source of threat.”

Asked if European countries seemed to express conflicting political views on social issues, Scheibelhofer said: “In recent years we have seen this paradox process over and over again.”

Austria’s far-right Freedom Party, for example, had pushed for a ban on the face veil in public places (the ban was introduced last week), while simultaneously promoting conservative family values and calling for cuts to women’s shelters.

“While these politicians hold on to their masculinist politics, they become defenders of women’s rights when male perpetrators are non-white and it is their religion or culture that can be made accountable for their problematic masculinity,” said Scheibelhofer.

Queer and LGBT groups on both sides of the ocean are pushing back against the anti-migrant sentiment that is sweeping the West.

On the day of Trump’s inauguration, the British group Lesbians and Gays Support the Migrants (LGSMigrants), along with other LGBT organisations, unfurled a banner on London’s Vauxhall Bridge that read, “Queer solidarity smashes borders.”

The group also set off flares, so rainbow streams of smoke billowed from the bridge.

“It is not long ago that LGBT people were the ‘illegals’ and it was our venues being raided, rather than the businesses of migrants,” said Ida-Sofie Picard, of LGSMigrants, in an email to MEE.

“They’ve lied about us too - so why should we believe them when they scapegoat other marginalised communities?”

Since last summer’s "Brexit" referendum, which has set the UK on a path to leaving the European Union and in which immigration was seen as a key issue by many voters, hate crime against LGBT people, eastern Europeans and Muslims has been on the rise according to data recorded by police as well as advocacy groups.

Yet some see a moment on both sides of the Atlantic for people from a broad array of backgrounds – including people of colour, Muslims, women, migrants and LGBT people – to unite against the far right.

In a statement released shortly after the executive order was published, the US-based Muslim Alliance for Sexual and Gender Diversity condemned the proposed “values test”, including possible questions about views on homosexuality, and called on other progressive movements to show their support.

“We call upon our allies within the LGBTQ movement, anti-racism movements, and faith-based communities to stand with us and other Muslims in opposing the implementation of these executive orders and the devastation they will wreak on families and communities across the country and the world,” said the group. 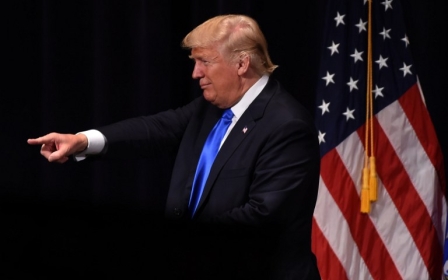