Libya burns as politicians and militia groups vie for control

Five weeks of bombardment by grad rockets have devastated parts of the capital, which is suffering cuts to power, water and petrol. Hospitals are running short of vital drugs and thousands are fleeing the city as fighting rages on 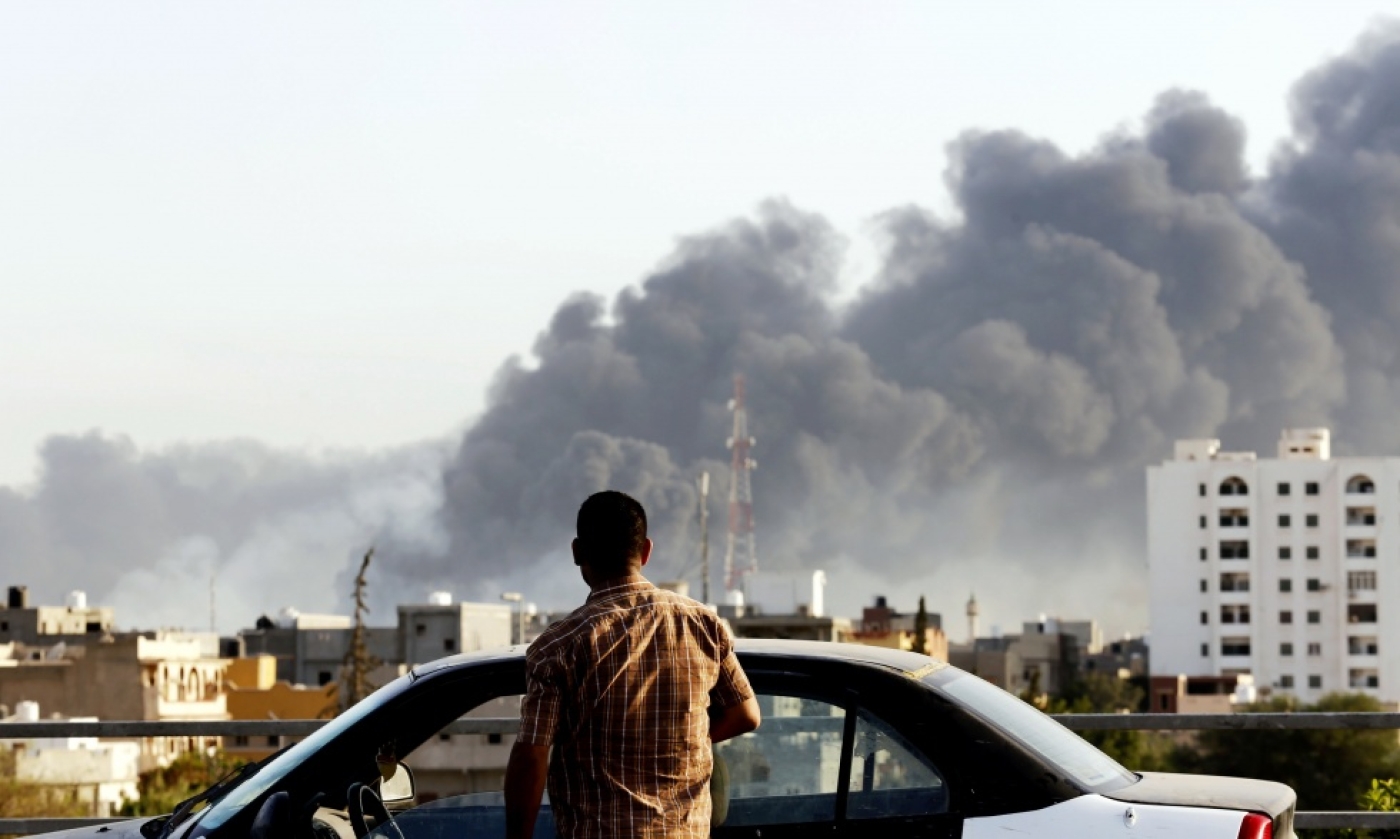 Smoke billows over Tripoli from the scene of fierce fighting at the country's international airport (AFP)
By
Steve Fox
Misratan and Islamist militia fighters captured Tripoli international airport in heavy fighting on Saturday, completing their conquest of the Libyan capital in an operation the country’s parliament denounced as “terrorism.”
In a day of furious fighting that saw air strikes against Misrata units by unidentified jet bombers, units in pick-up trucks mounting machine guns surged into the airport after a five-week battle with its Zintan militia garrison.
Television pictures showed militia jeeps racing along the tarmac past huge black plumes of black smoke from burning oil storage sites and wrecked airliners, as fighting continued on the airport perimeter.
The Misratans, part of a militia alliance named Libya Dawn accused the Zintani militia of being supporters of the former dictator, Muammar Gaddafi, deposed by both militias three years ago during the NATO-backed 2011 revolution.
”Libya dawn announces that it totally controls Tripoli International airport,” said a statement screened on An Nabaa television.
But the victory may by phyric; The five week bombardment has left the airport wrecked, with smashed buildings, cratered runways and 21 passenger jets smashed on the apron.

This is what used to be called #Tripoli International airport, set on fire by militias after 'liberating' it #Libya pic.twitter.com/lXJk00N41F

And neighbouring Egypt and Tunisia have closed their air space to planes from western Libya after air strikes by mystery planes struck Misratan units in the capital, killing 17 militiamen.
The battle leaves Libya in a state of civil war, with fighting also raging between Islamist brigades and nationalist forces of a former general, Khalifa Hiftar, raging 400 miles away in the eastern city of Benghazi. There were reports that jets from Hiftar had struck and sunk a ship from Misrata trying to bring ammunition to Islamist brigades in the city.
In Tripoli, leaders of the former parliament, the Islamist-led General National Congress, announced they were reconvening the body, insisting it was the true sovereign government for Libya.
The fighting has left two parliaments vying for control of Libya; Congress, in Tripoli, and the House of Representatives in the eastern city of Tobruk. The country’s galaxy of militias are now lining up on either side of the divide.
Leaders from Zintan a town 90 miles south east of the capital, insisted its withdrawl from the airport was “tactical”, and its units remain west of Tripoli.
Earlier in the day, unidentified jet bombers struck Misratan positions for the second time in a week, hitting ammunition storage and headquarters sites and reportedly wounding two sons of a Misrata commander.
Operation Dawn officials denounced the raids, blaming Egypt and United Arab Emirates for what it called a “cowardly attack” and accusing the government of complicity. Television pictures showed pictures of an armoured car the Misratans said had been given to Zintan militias by the United Arab Emirates.
A spokesman for Hiftar, who has led a three-month offensive against Islamist units in Benghazi, insisted his forces launched the air strikes, but observers have noted that the bombing shows a precision Libya’s air force previously struggled to achieve.
Whoever is responsible for the air strikes, they have deepened the animosity in a country fast dividing into two armed camps, one tribal, the other led by Islamists.
Misrata and its allied Islamist militias appear to have won domination of the capital, but their opponents are massing for war to the east and west.
West of the capital, Zintan units are allied with tribal forces of the Washafani and Warfalla, and the majority of tribal leaders of the southern province of Fezzan have declared their support for the government.
In the eastern province of Cyrenaica, air strikes were reported on Islamist units in the coastal city of Derna.
Meanwhile, Libya is burning. Five weeks of bombardment by grad rockets have devastated parts of the capital, which is suffering cuts to power, water and petrol. Hospitals are running short of vital drugs and thousands are fleeing the city. Administration has broken down, making it impossible to determine how many are dead, with the figure likely to be in the hundreds. Most international embassies have already evacuated, and thousands of foreign workers continue to be be taken out by airlifts and warships.
Libya’s government, which fled to the eastern town of Bayda  this month, lacking forces of its own, tried and failed to win international intervention from the United Nations Security Council in July.
Three years ago, the UN mandated air strikes by NATO which secured victory for rebel forces against Gaddafi. But with those same rebel units now battling each other, outside states are reluctant to intervene in a confused and tangled war.
Instead, a Libyan delegation is in Cairo, appealing for help from Egypt’s government which has already declared it will not tolerate “insecurity” on Libya’s borders. Egypt’s new president, Abdel Fattah al-Sisi, has overseen the mass arrest of Islamists in his own country, but has yet to comment on the war raging across the border.
In Tobruk, Libya’s parliament has chartered a ship to provide  accommodation for lawmakers, leading some to observe that it provides a means of evacuation if war reaches this until-now untouched part of the country.
Libya Dawn was created by Misrata and Islamist militias in July, when it became clear that Islamists had suffered defeat in elections held in June. Dawn fighters accuse the new parliament of being dominated by supporters of Gaddafi.
They gained support last week from the Grand Mufti, Libya’s highest religious figure, Sheikh Sadiq Ghariani, who called Libya Dawn “heroes” and branded their opponents “criminals”.
For the parliament, the trump card may prove to be the international recognition it has been granted, which gives it control of the country’s bountiful oil revenues. A year-long militia oil blockade by eastern militias which cost Libya $30 billion has ended with oil deliveries resuming in a chain of four oil ports.
Ultimate victory for Operation Dawn forces may depend on gaining control of those ports, leading many to predict more fighting in the weeks to come.