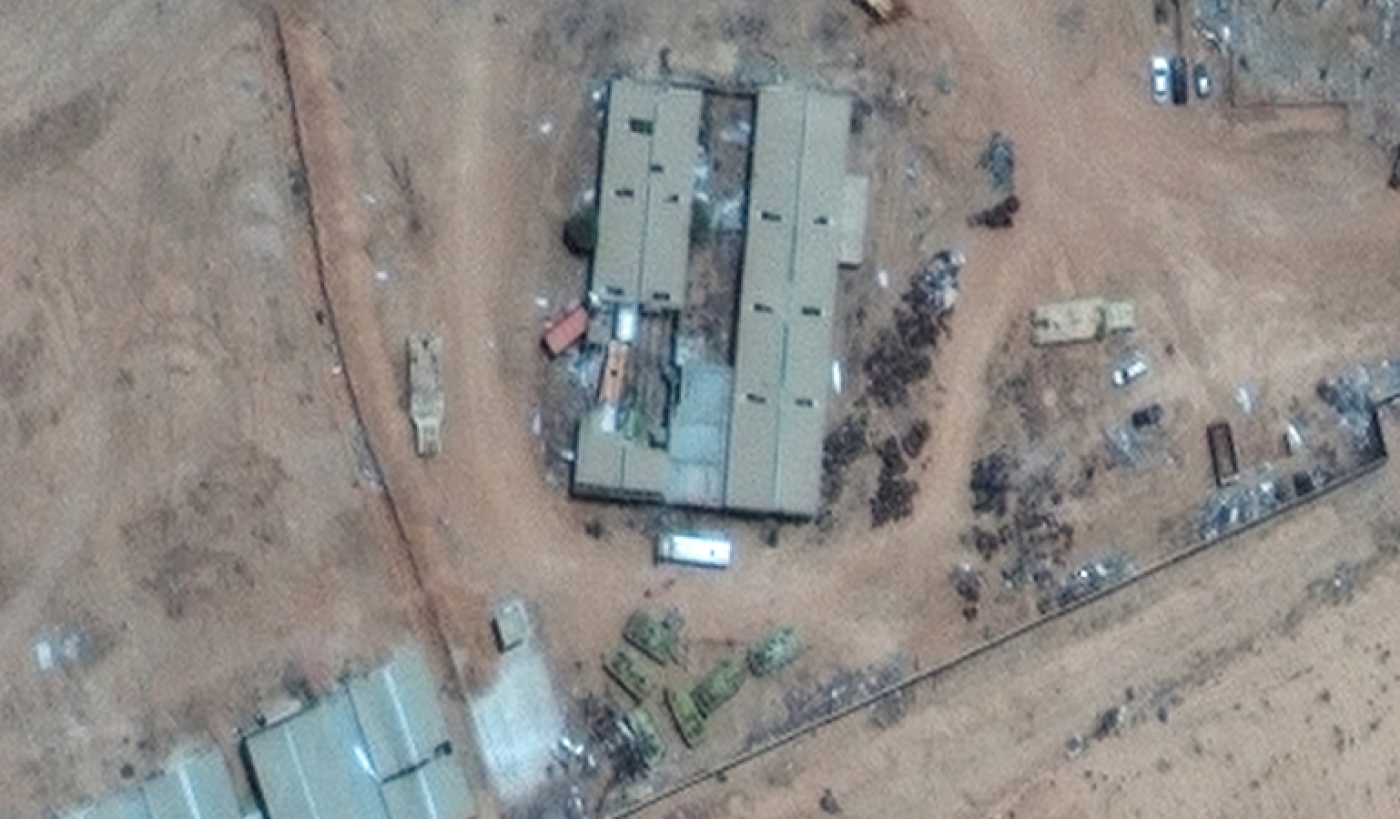 Authorities at a migrant detention centre in Libya have denied that an explosion at the centre last month originated in a weapons and ammunition depot a few steps from where refugees were being held or that anyone was injured.

While the manager of the centre said the explosion was caused by a gas canister, survivors say a spark in the ammunition depot caused the blast at the centre in Gharyan and that there were several injuries, as well as possible deaths.

'We managed to escape by force – we outnumbered the guards there. After we escaped, we discovered that there were injured who escaped with us and were hiding in the mountains'

The incident has highlighted the widespread practice of detaining refugees near weapons stores and the consequent dangers, at a time when record numbers of refugees disembarking from Libya are being returned to detention centres.

Satellite images of the site taken before and after the blast, along with witness statements, show the explosion took place on 20 June in Abu Rashada, a migrant detention centre in Gharyan, 100km southwest of the capital Tripoli, in the Nafusa mountain region.

From above, the high-resolution images appear to show a military compound with armoured vehicles in the vicinity: a tank, military vehicles and an artillery gun are visible in the images obtained by Middle East Eye. 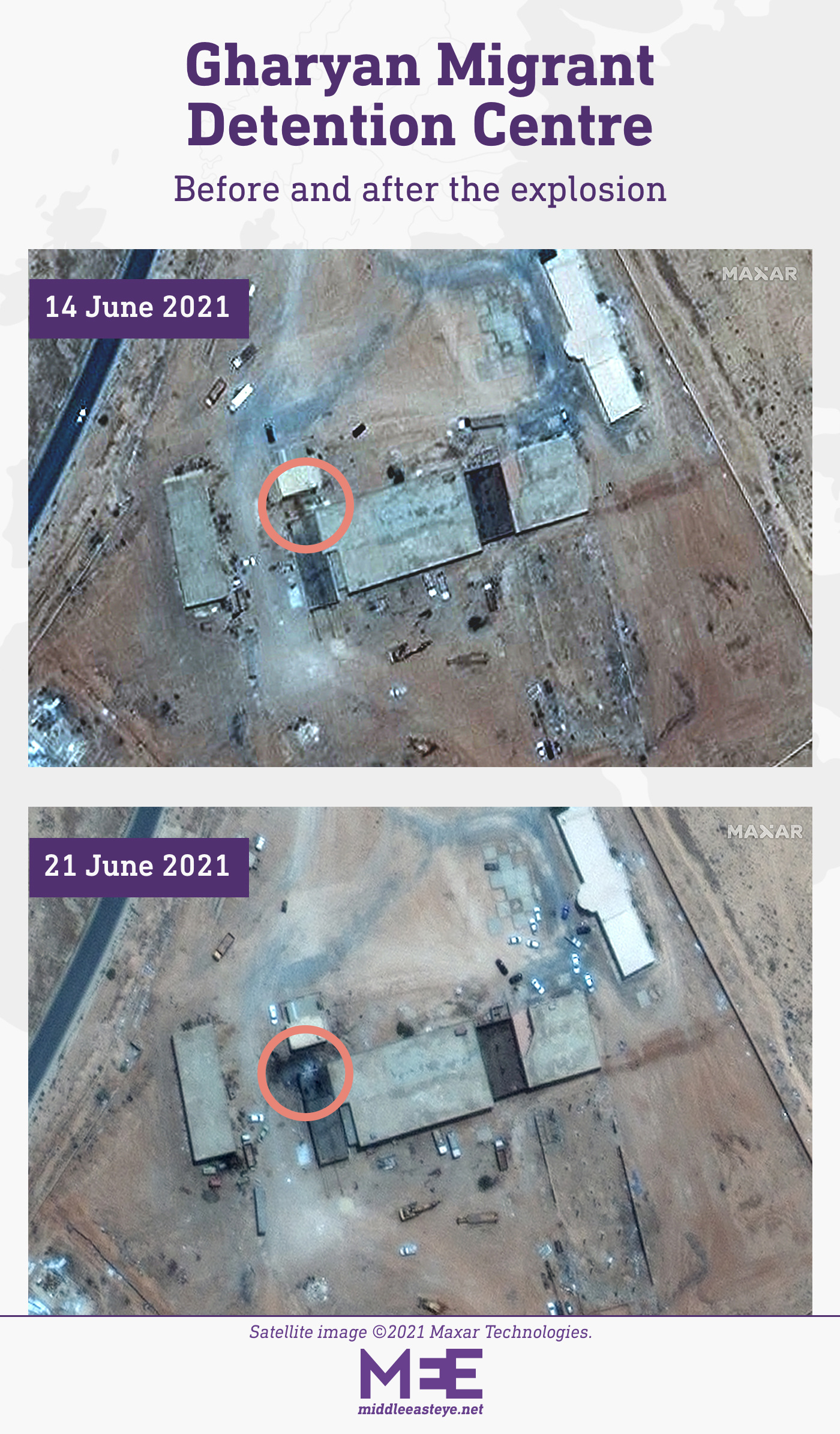 Usama Halfaoui, the manager of the Gharyan centre who works for the interior ministry, told MEE that the blast was triggered by the explosion of a gas canister in a section of the centre and that the flames spread into the refugees' cells.

"We let the migrants out and some of them tried to escape. There are no deaths or injuries," he told MEE.

However, a survivor of the blast who managed to reach Tripoli told MEE: "It all started in the ammunition warehouse. It was the last room to the back of the detention centre.

"They were welding some iron bars, but a spark hit the ammunition depot, fire erupted and extended, and this is when the explosion happened.

"We managed to escape by force – we outnumbered the guards there. After we escaped, we discovered that there were injured who escaped with us and were hiding in the mountains."

Another survivor said: "A large number of people managed to escape that day with us, around 300, because guards lost total control since the explosion was heavy."

A Libyan official from the Ministry of Interior told MEE: "They shot people who tried to escape," adding that about 200 migrants were brought back to the centre after the attempted escape.

Halfaoui confirmed that the refugees were being held next to a military compound, but he denied that guards had shot at those trying flee.

'I'm afraid there are dozens of dead. The militia that controls the centre has a weapons depot and its men are involved in fuel trafficking in the desert'

It is unclear how many refugees may have been injured or died during the explosion or escape.

An official from the Ministry of Interior's Department for Combating Migration (DCIM) told MEE: "I'm afraid there are dozens of dead.

"The militia that controls the centre has a weapons depot, and its men are involved in fuel trafficking in the desert."

Medical sources from Gharyan hospital told MEE that three people were injured, hit by gunshot wounds and with fractures.

A source from the International Committee of the Red Cross told MEE that two people had died.

Justin Brady, a representative of the United Nations Humanitarian Affairs Office in Tripoli, said: "I would be surprised to know that there are no injuries."

Local sources say the Al-Husri militia - one of three militias along with the Al-Dayekh and Liwa Gharyan who make up the "Gharyan brigade" - are based at the Gharyan compound. 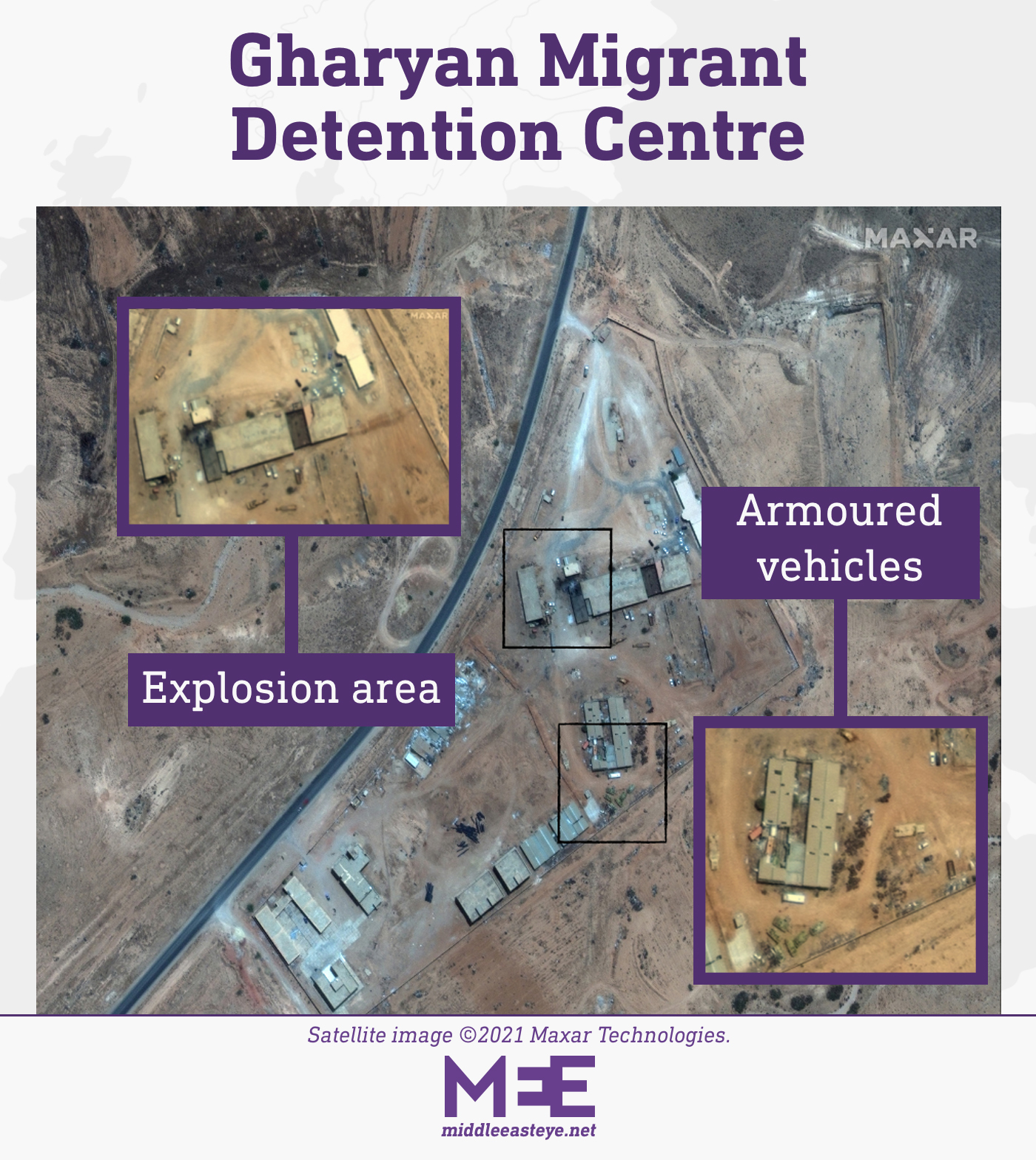 Notes obtained by MEE from a May meeting of a working group monitoring EU-funded aid projects in Libya described conditions in the Gahryan migrant detention centre as "reportedly brutal".

The notes read: "Guards routinely extort ransoms for release... [an] escape attempt on 1 April led to [the] shooting of two migrants; guards focus on newly arrived detainees, particularly of more 'lucrative' nationalities [such] as Eritrean, Ethiopian or Bangladeshi."

A few days before the explosion, hundreds of people had arrived in Gharyan after being forcibly brought back to shore by the Libyan coastguard.

According to the refugees they were abandoned in crammed cells, with temperatures over 40 degrees.

Those held included Syrians, Algerians and Egyptians, with some sleeping in corridors.

One refugee, who was detained at the centre after his failed attempt to cross the Mediterranean, told MEE: "People could barely move inside.

"We drank salty water from the tap. The first days in detention we were sleeping on the floor, then some mattresses were distributed by the International Organisation of Migration [IOM]. The situation was difficult."

The Libyan coastguard has returned more than 13,000 people to Libya this year, despite the UN declaring that it cannot be considered a safe place for disembarkation.

The figures already surpass the total number of people intercepted or rescued and disembarked for all of 2020.

Nearly 900 people have perished in the Mediterranean so far this year, according to the IOM.

In recent years, the EU has partnered with Libya's coastguard to curb migration to Europe.

However, rights groups say such a policy leaves migrants at the mercy of either the sea or Libya's armed groups, with many ending up confined in squalid detention centres rife with abuse.

Others go missing and are unaccounted for, raising fears that some may have been channelled into human trafficking networks.

Rights groups have also decried the handover of migrants to the Libyan authorities, accusing merchant vessels of committing "pushback by proxy," a practice whereby migrants are denied the right to apply for international protection.

The latest such incident was documented by the German rescue charity Sea-Watch on 14 June, when the Vos Triton, a Gibraltar-registered vessel, handed over to the Libyan coastguard 270 migrants and refugees rescued in international waters during their attempt to reach Europe. "Although the authorities, [European coastguard agency] Frontex and the UNHCR, were being updated regularly via email with all the relevant information and most recent GPS positions, after more than 10 hours (!) there was still no coastguard ship on the way," reads a joint report by Sea-Watch, Mediterranea Saving Humans, and Alarm Phone.

On 15 June, following disembarkation, the survivors were escorted to two detention centres: Al-Mabani in Tripoli, and Gharyan, the centre where seven days later the explosion happened.

New migrant centres have been opened in recent months in Libya's western mountains, far from the coast and controlled by commanders close to the head of the DCIM, Colonel Mabrouk Abd al-Hafiz.

The new plan, supported by Italy and financed by the European Union, foresees patrols in the desert, with EU equipment for border management that Libyan authorities report is provided by Italy.

In recent weeks, Doctors Without Borders (MSF), announcing that violence had increased significantly in detention centre over the course of 2021, said it will suspend its medical activities in two Libyan detention centre because the levels of violence taking place there are "no longer acceptable".

In a statement, MSF said: "Over the space of just one week, our teams witnessed first hand, and received at least three reports of, violent incidents resulting in severe physical and psychological harm."

On 13 June, at another detention centre, Abu Salim, MSF said that "automatic weapons were fired on people held there".

The firing of these weapons "caused multiple casualties," reported the MSF teams.

Seven days after that incident, MSF was refused access to Abu Salim, which in turn raised their concerns about the repercussions for those lacking treatment inside the centre.

MSF states that the increase in violence it has observed in 2021 "goes together with the simultaneous significant rise in the number of refugees, migrants and asylum seekers intercepted at sea by the EU-funded Libyan coast guard". 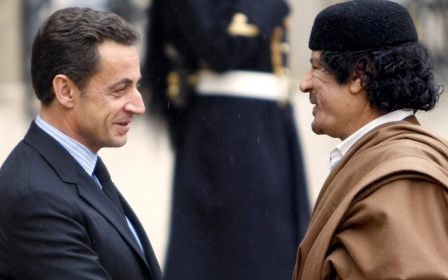