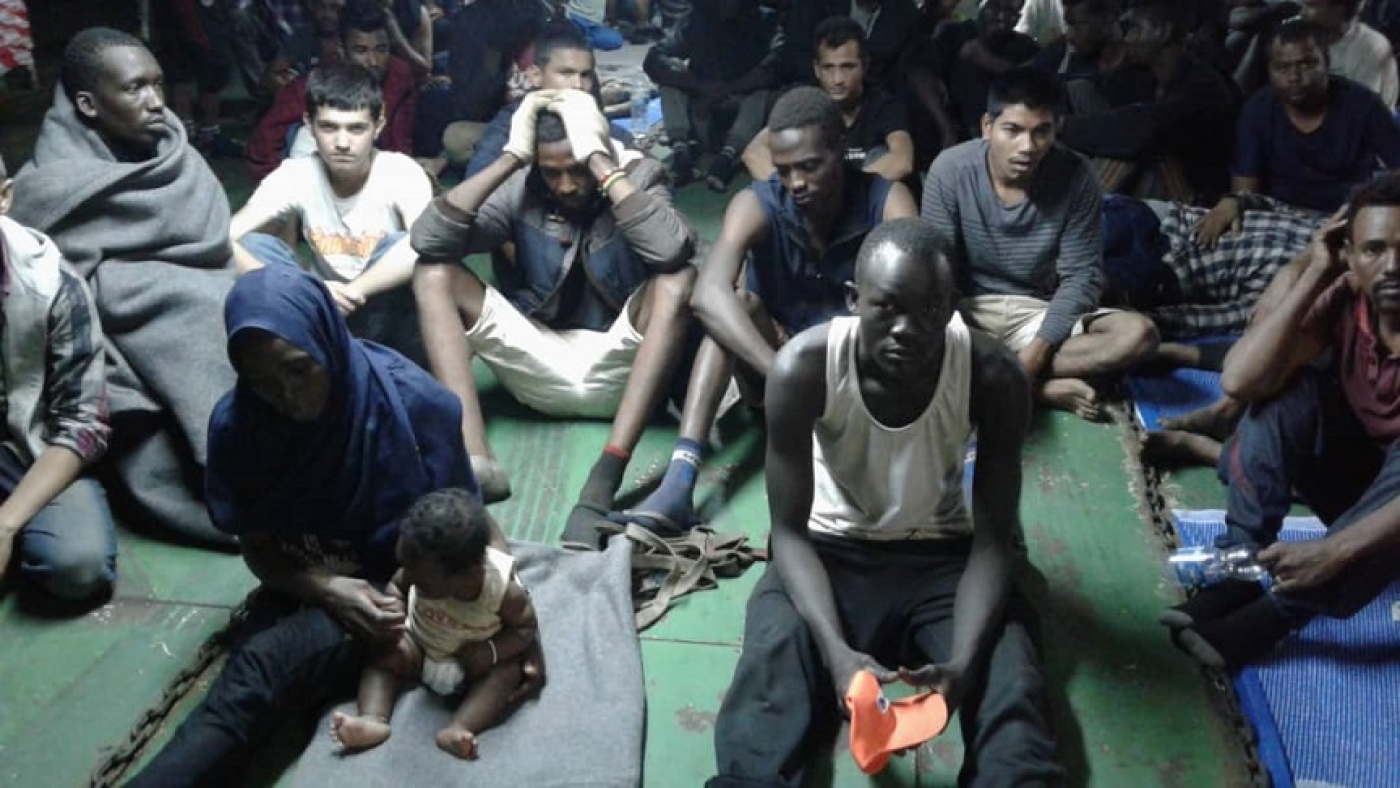 TRIPOLI –  They left Libya in a rubber raft 10 days ago. From Ethiopia, Pakistan and beyond, they sought to take the well-worn passage across the Mediterranean to Europe and, as one passenger said, escape hell.

Now more than 70 migrants, including children, are in a stand off with Libyan authorities in the northwestern port of Misrata, refusing to disembark from the Nivin, the Italian cargo ship that rescued them.

'We won't get off this ship. We won't return to that hell'

Many have already spent months travelling across dangerous terrain at the whims of smugglers or been detained in Libyan detention centres. Some, say aid workers, have been tortured by traffickers trying to extort money.

Barricaded inside the ship, using plastic containers in place of toilet facilities, with the crew on the upper decks, and surrounded by Libyan armed forces awaiting orders from Tripoli, they now refuse to return.

“We won't get off this ship,” Dittur, a 19-year-old from South Sudan who remains onboard, told Middle East Eye by phone. “We won't return to that hell.”

In the Mediterranean, where there are no longer NGO rescue ships on patrol, the incident sheds light on the moral maze in which merchant ships now find themselves in the absence of aid workers. It may be easier for crews to pretend not to see rubber boats rather than lose time on their course. Six ships passed the migrants before the Nivin rescued them, migrants told MEE.

However, human rights advocates said on Friday, the standoff is also a testimony to the continuing problems within Libya’s detention centres, which the UN described earlier this year as horrific. One of the migrants told MEE smugglers picked him up from one of the centres with full knowledge of authorities.

The protest, said Middle East and North Africa director for Amnesty International, Heba Morayef, “gives a clear indication of the horrifying conditions refugees and migrants face in Libya’s detention centres, where they are routinely exposed to torture, rape, beatings, extortion and other abuse".

As the standoff continues, there are concerns that the protest may end in violence.

The migrants’ journey began on 6 November when 95 people, including 28 minors, set off in a raft from the coastal Libyan city of Khoms.

Dittur, one of those on board, told MEE that the group had been at sea for several hours when they realised they were in danger and tried to get help from passing ships.

'Six ships passed by us that night and no one rescued us. They have seen us without saving our lives'

“We called the emergency number saying we were on the rubber boat, which was already in very bad condition. Six ships passed by us that night and no one rescued us. They have seen us without saving our lives,” he said.

Finally, he said, a merchant ship arrived. It was the Nivin, a cargo ship flying a Panamanian flag, which had left the Italian city of Imperia on 7 November with a load of cars destined for the North African market.

The crew helped everyone on board. “‘We wil bring you to Italy. Do not worry,'" Dittur said they were told.

Intead, several hours later, the Libyan coastguard arrived. “It was our nightmare,” the migrant from South Sudan said. As the coastguard started to attempt to transfer people off the boat and the migrants realised they would be returning to Libya, they refused to disembark, a Nivin crew member and passengers told MEE.

Communication between the Nivin and Italy’s Maritime Rescue Coordination Centre (MRCC) reviewed by MEE shows the MRCC acting on behalf of the Libyan coastguard.

In their first contact via a cable seen by MEE, the MRCC told the Nivin to rescue the migrants on board the rubber raft and urged the crew to contact the Libyan coastguard. The number the MRCC gave for the coastguard, however, was Italian.

At 7.39pm on 7 November, MRCC writes to Nivin: "On behalf of the Libyan Coast Guard… please change course and drive at maximum speed at the indicated latitude." The MRCC shared another Italian phone number as a point of contact.

At 9.34pm in an email seen by MEE, the Libyan Navy, with the Maltese navy, Eunavfor Med and the Italian Navy copied in, tells Nivin: "As a Libyan authority, I order you to recover the boat and we will give instructions to disembark."

The cargo ship arrived in Misrata on 9 November. On Wednesday, after days-long mediation between Libyan authorities and the migrants, a Somali woman and her three-month-old baby, along with 12 others, disembarked.

Doctors Without Borders (MSF) staff at the port of Misrata negotiated with Libyan authorities, who carried food and medicine on board to injured migrants who have burns and abrasions. Now 70 remain barricaded in the ship.

A patient in serious condition refused to be taken to a medical facility in Libya. He said he would rather die on the merchant ship

"They are desperate,” Julien Raickman, MSF’s head of mission, told MEE. “In the group, there are several people, including children, tortured by traffickers to extort money. A patient in serious condition refused to be taken to a medical facility in Libya. He said he would rather die on the merchant ship. "

There are no toilets, so the migrants are using plastic bottles to urinate. Journalists have not been allowed to access the ship, the port or even the city of Misrata. Outside at the port, armed forces wait for instructions from Tripoli, according to a source inside the port.

From Tripoli, Libyan naval commander Anwar El Sharif told MEE: "They are pirates, criminals. We do not consider them migrants and this is no longer a rescue operation for people in danger. They set fire to the ship's cargo and attempted to kill the crew,” he said.

“We will treat them as they deserve, that is, as terrorists. It is a work of special forces, counterterrorism. They will be in charge of evacuating the ship."

But those still onboard deny that they set cars on fire or tried to kill anyone. Instead, they say that they were burned by fuel from the rubber raft they originally set sail on.

They also sent photos to MEE showing scratches and scars which they say are wounds they sustained in detention centres in Tripoli and Tajoura, a nearby town that many of them, including Dittur, were trying to flee.

Two years ago when he was 17, Dittur said he escaped from South Sudan, crossed a desert and was arrested the first time he tried to cross the Mediterranean. He was imprisoned for seven months in Bani Walid detention centre in Libya.

That first attempt, he said, was followed by another. And then another, even as he continued to be extorted by smugglers.

"Every time, more torture, and more money to ask my family to let me go, and every time, they [the smugglers] let me go. I worked, free, to try to leave again," he said.

“When [Libyan authorities] held me again in a prison, I asked to be able to give my documents to humanitarian organisations, they told us that they would help us out, to get away from there. But months went by, no one showed up," he said.

Passengers with him on the raft, he said, were kept in a shed in the countryside before smugglers transported them to the coast.

Dittur said he had been picked up by smugglers at the Tariq al-Sikka detention centre in Tripoli, which is managed by the Government of National Accord's Ministry of the Interior.

"Smugglers can enter whenever they want in prisons,” he said. “They come to make arrangements with those who want to leave and enter to take away who can pay his share, with me they did so, two weeks ago."