City's fall would be setback to IS efforts to expand 'caliphate' beyond Syria, Iraq, where they have suffered losses Forces loyal to Libya's Government of National Accord (GNA) said they launched a new attack on Saturday on diehards of the Islamic State (IS) group in the coastal city of Sirte.

Backed by weeks of US air strikes, the pro-GNA forces have recaptured nearly all of what had been the militants’ main stronghold in North Africa.

The city's fall would be a huge setback to IS's efforts to expand its self-proclaimed "caliphate" beyond Syria and Iraq where they have also suffered losses.

"The fighting has begun. We are attacking the last Daesh positions in district three" where the militants are cornered, a GNA fighter told AFP, using an Arabic acronym for IS.

Libyan fighters have welcomed the US air strikes against IS that began 1 August, saying they helped dislodge snipers, foil suicide attacks and prevent IS from moving, Al- Arabiya said.

By most estimates, IS had 2,000-5,000 militants before May in Sirte. Some are thought to have escaped near the start of the campaign and hundreds have been killed, though no figures are available, Al-Arabiya said.

Fewer than 200 IS militants remain in Sirte, Pentagon spokesman Captain Jeff Davis said on Thursday, and they are essentially surrounded by GNA forces and the sea.

The GNA forces media centre confirmed on Facebook that the new push had begun to retake Sirte, located 450km east of the capital Tripoli.

"Our forces are advancing inside the areas where Daesh is, in district three, and so far have taken control of" two banks and a hotel, the media centre said.

It also said they had thwarted an attempted suicide bombing.

Seven members of the GNA forces were killed and 30 wounded in clashes with IS on Saturday, it added.

Earlier, an AFP journalist saw ambulances leaving Sirte for Misrata to the west where the wounded are treated.

Since the offensive against Sirte began on 12 May, more than 400 fighters loyal to the government have been killed and about 2,500 wounded.

It is not yet known how many IS militants have been killed, but the GNA media centre said the bodies of 10 had been found in a school in district one, which was being combed after being retaken on Monday.

The forces loyal to the UN-backed GNA had said last weekend they were preparing to "liberate" the entire city after seizing several IS positions, including its headquarters.

On Wednesday, GNA head Fayez al-Sarraj visited Sirte for the first time since loyalist forces launched their offensive more than three months ago to drive the militants from the city.

Sarraj and some of his ministers toured former front lines as well as the Ouagadougou conference centre, which IS had used as its base.

"We will continue to chase, with the help of God, the Daesh remnants and strike them wherever they may be in our country," Sarraj said this week.

The capture of Sirte by IS last year sparked fears the militants would use it as a springboard for attacks on Europe.

The Sunni IS took advantage of the chaos in oil-rich Libya after the 2011 uprising to seize Sirte in June 2015, hoisting their black flag above the city.

On Friday, the United States Africa Command said that since the US campaign began on 1 August, US drones, helicopters and bombers had carried out a total of 108 air strikes against IS in Sirte.

It said that on 31 August, targets including five "enemy fighting positions" and a vehicle bomb were hit.

The GNA has been struggling to assert its control over all of Libya.

France on Friday urged Sarraj to find a compromise with the Tobruk-based parliament in the far east of the country, which does not recognise the unity government.

"He must find a compromise with the Tobruk parliament and General [Khalifa] Haftar" who controls the armed forces in the east, Foreign Minister Jean-Marc Ayrault said in Paris. 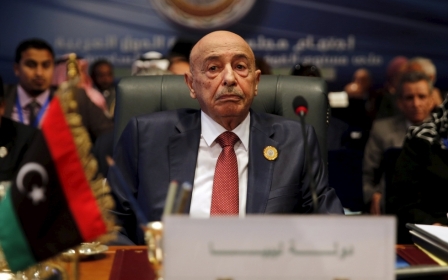