Lieberman says Israel will not accept Iranian entrenchment in Syria Israeli Defence Minister Avigdor Lieberman said on Tuesday his country would not accept Iranian entrenchment in Syria after missile strikes on a Syrian government air base blamed on Israel.

"We will not allow Iranian entrenchment in Syria no matter the price to pay," he told journalists.

"We have no other option. Allowing Iran to strengthen itself in Syria is like accepting that the Iranians strangle us."

Lieberman did not confirm Israel carried out Monday's deadly strikes, which Syria and Russia blamed on Israel.

His comments came as the top adviser to Iran's Supreme Leader Ali Khamenei said his country would "not remain without response" to the strikes, the Lebanese al-Mayadeen channel reported.

Ali Akbar Velayati was speaking on arrival in the Syrian capital Damascus, reported al-Mayadeen, which is well-connected in government-held parts of Syria.

Seven Iranian military personnel were killed in the strike on the Tiyas, or T-4, air base near Homs, the Iranian Tasnim news agency reported on Tuesday.

Syria, Iran and Russia have accused Israel of being behind the attack - something Israel has neither confirmed nor denied.

However, Israel has carried out numerous strikes in Syria, with some intended to stop Iran and allies including the Lebanese group Hezbollah from gaining strength near its borders.

Iran's military help has been crucial for Syrian President Bashar al-Assad in his war against rebel groups since 2011, and Velayati also visited Syria in November.

Israel regards Iran as its biggest external foe and has called Hezbollah the biggest threat on its borders.

The enmity between Israel and Iran has threatened to escalate as a result of their competition in Syria. In February, Syrian anti-aircraft fire brought down an Israeli F-16 jet that was attacking the positions of Iran-backed forces in Syria.

Trump's cheap shot against Iran, which has consistently condemned use of chemical weapons by anyone & is itself the victim of their use by Saddam with US support, is hypocritical. His threats to repeat impulsive acts of aggression is symptomatic of US policy helping extremists.

On Monday, the UN Syria envoy Staffan de Mistura referenced the air base strike along with other recent events in Syria in a briefing to the Security Council, warning against a "situation of uncontrollable escalation".

The attack took place hours after US President Donald Trump warned there would be a "big price to pay" following the reports of a poison gas attack on the Syrian rebel-held town of Douma. Syria's government has denied any involvement in that attack.

"It seems the US government is looking for an excuse for military intervention," Iran's foreign minister, Mohammad Javad Zarif, said as he arrived in Brazil early on Tuesday, according to state media.

"Iran's stance on chemical weapons is clear and we condemn any use of them against any target." 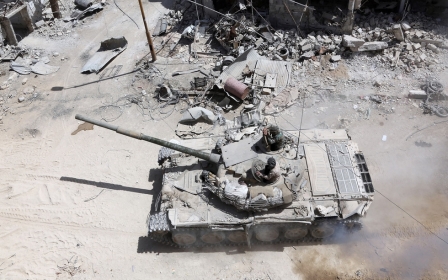