'The coronavirus anti-mask movement is like a recruitment tool for this right now,' one university professor tells MEE 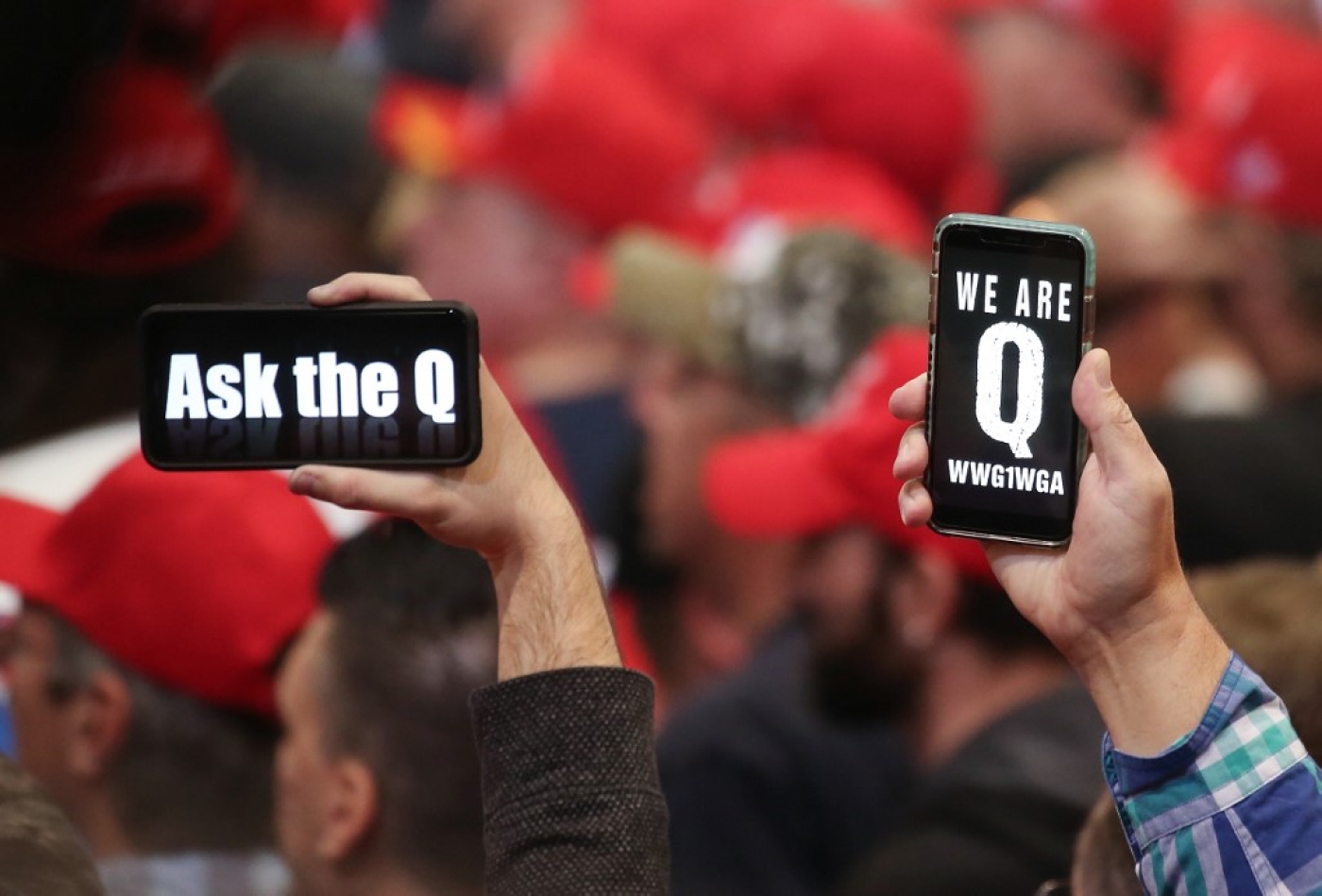 A secret plan orchestrated by Muslims to bring Sharia law to the United States by way of coronavirus restrictions is the latest theory backed by the increasingly popular QAnon conspiracy.

The movement, believers in a collection of far-right conspiracy theories, is based on the idea that a network of "deep state" actors is working behind the scenes to control the world. In 2019, an FBI field office in Pheonix, Arizona, was so concerned, it deemed the group a domestic terrorism threat.

Despite its wildly xenophobic rhetoric and threat designation, the group has gained more traction in recent months, with at least 11 Republican congressional candidates expressing support.

Heavily backed by a fringe section of US President Donald Trump's base, QAnon believers have been further united by opposition to coronavirus restrictions and galvanised by this year's presidential election.

The group started as an online following surrounding a person going only by the name "Q", who first appeared on internet message boards during the 2016 presidential elections. Q claimed to be a government employee with top-level security clearance, dropping anonymous "information" online - what followers call "breadcrumbs".

The first theory to grow out of QAnon was dubbed "pizzagate". It accused a "satanic cabal of elites" - made up of Hollywood figures and world leaders - of running a secret global paedophile ring while working to create a new world order.

Its latest agenda revolves around challenging the legitimacy of the coronavirus threat, including spreading the unfounded claim that 5G cellular networks were behind the pandemic - or "Plandemic", as one conspiracy film released this year calls it.

Coupling the group's hatred of coronavirus restrictions with its anti-Muslim rhetoric, one of QAnon's most recent memes depicts an imagined trajectory that takes place over the course of four years. The first panel in the image shows a woman wearing a surgical mask, the next a cloth mask, and so on, before ending with a woman wearing a full burka, a covering often worn by Muslim women in the Gulf.

"That masks leads to a burqa and then goes to Sharia law image... is part of the constructed narrative that people in the conspiracy world are using via the coronavirus to extend and expand their pre-existing perspectives," said Richard Hanely, a journalism professor who has for several years taught a class on the spread of disinformation at Quinnipiac University in Connecticut.

"The coronavirus anti-mask movement is like a recruitment tool for this right now," he said.

Twitter has worked to take down the image, but it continues to circulate, along with others that link mask-wearing to some imagined Muslim conspiracy.

While anti-Jewish conspiracies can be traced in American culture to the early 20th century, "anti-Islam is a relative newcomer to the realm of conspiracy theories" in the United States, Hanley said.

Before coronavirus, a favourite QAnon villain was the Muslim Brotherhood, which the group believes controls large parts of the Democratic party, particularly those affiliated with former President Barack Obama and Hillary Clinton.

"There certainly is an element of anti-Islam that runs through QAnon conspiracies," Jason Blazakis, former director of the State Department's Counterterrorism Finance and Designations Office, told Middle East Eye.

QAnon conspiracies that vilify Islam were adapted by the group as a way to create "us-versus-them narratives", said Blazakis, who is now the director of the Center on Terrorism, Extremism, and Counterterrorism at Middlebury College Institute.

Vilifying Muslims, in particular, is seen as fair game in QAnon circles, Blazakis said, because President Trump's stance on Islam and its followers is clearly negative, with the president once calling for "a total and complete shutdown of Muslims entering the United States".

"QAnon generally will look at policies of previous administrations that are perceived to have been more pro-Islam and more sensitive to immigration-related issues at large," Blazakis said. "The Trump administration is trying to roll that back, right, and so I think it plays into the QAnon theory that before the 'white knight', represented by Donald Trump, came into the picture, the so-called 'deep state' was 'pro-Muslim Brotherhood'."

Blazakis pointed to QAnon theories that surrounded Hillary Clinton during her campaign in 2016, such as one that targeted her long-time adviser Huma Abedin.

Abedin was accused by the group as being part of the pizzagate paedophile ring, as well as part of some "deep state" support for the Muslim Brotherhood, simply due to her being Muslim.

Seemingly aware of concerns believed to be fuelled by anti-Muslim conspiracies such as those of QAnon, one question among dozens asked in a survey launched on Trump’s re-election campaign website in 2018 was "are you concerned by the potential spread of Sharia Law?"

A central tenet of the conspiracy is that the "deep state" network is working tirelessly to take down President Trump. And the group's unwavering support for him has been mirrored, with the president once meeting and taking a photo with QAnon social media personality Michael "Lionel" Lebron in the Oval Office.

Trump has also, on many occasions, retweeted QAnon followers and theories, giving even more legitimacy to the movement.

Last year, Trump retweeted a post from a QAnon page named "Deep State Exposed", which said: "The 'elite' proclaim America must submit to Islam or else!!!".

The President of the United States amplified this video a few weeks after dozens of Muslims were executed while they prayed.

The account this is coming from is also one of the leading Q lunacy spreaders. https://t.co/pqbqLK9uMp

Within the tweet was a link to a video featuring a man who said Muslims would "kill Americans" if they did not allow them to follow their religion. The video has since been removed by Twitter.

With the help of Trump and social media, the QAnon movement has garnered so much attention that it has broken through into mainstream American politics.

"It's created this complex mythology that people believe in, almost as if they're believing in a religion," Hanely said. "And there are various rituals now associated with it".

One such ritual is publicly pledging allegiance to the movement. Trump's first national security adviser, Michael Flynn, over the 4th of July weekend posted a bizarre video of himself and five others standing around a backyard fire, taking what is considered a QAnon oath.

While the oath is the same used to swear-in new members of Congress, the group ends the pledge by saying: "So help me God, where we go one, we go all."

Abbreviated to the hashtag #WWG1WGA, the saying is a vow well-known to QAnon-believers. Since posting the video, Flynn added #TakeTheOath to his Twitter bio. In a search on the platform, both hashtags bring up hundreds, if not thousands, of others vowing loyalty to QAnon.

While QAnon has been generally believed to be a US-based movement, Blazakis said his research on the group has suggested that there is a good chance the conspiracy network could actually be the work of the Russian government, seeking to spread disinformation for its destabilising effect.

If Russia were behind the movement, its anti-Islamic tendencies would line up with the country's historical persecution of Muslims, Blazakis continued.

"I think it's really interesting to see what the primary themes are within QAnon and how they may track with things that the Russian Federation and the Putin regime, specifically, may tout," he said.

Regardless of how it started, stopping the spread of QAnon's disinformation campaign will be no easy task.

With free speech being a main tenet of democracy, the responsibility to mitigate the spread of QAnon's conspiracies lies within the hands of social media platforms, not the government, both Blazakis and Hanley said.

According to Hanley, QAnon accounts have been encouraged by Facebook's algorithm to such an extent that he believes the platform is almost exclusively to blame for the ideology's wide reach.

"It's Facebook, specifically" that is the problem, Hanley said. "Facebook's algorithms promote QAnon because if you 'like', for example, an [anti-vaccination] page, you're going to get a recommendation to 'like' a QAnon page - because the two are closely linked and allied, based on the machine-learned part of the algorithm. So once it gets into the recommendation engine, it spreads wildly."

In an email to MEE, a spokesperson from Facebook said the company had been trying to quell the group's messaging on its platform by "closely monitoring" its activity and taking down accounts, in addition to re-thinking how its policies apply to the issue.

"In April, we took down accounts, Groups, and Pages tied to this conspiracy theorist movement for violating our policies," the spokesperson said, adding that Facebook was also working to demote such groups in its search results.

Still, even without algorithms that actively encourage the distribution of the conspiracies, social media in general has caused "a quantum leap, in terms of the capacity to spread" these ideas, Hanley said, because online peer networks provide a platform for ordinary people to share information with their own personal friendship groups.

"So it still grows tremendously and their story gains credibility and percolates up to the level of politics. Politicians run for office to win, so if they see a certain constituency believing in a certain thing, they will of course sign on to it," Hanley said.

Censorship of disinformation on social media websites has led to outrage from the far-right, leading to the creation of platforms such as Parler. Created in 2018, the platform, increasingly popular among Trump supporters, has dubbed itself a "free speech social network" that refuses to censor disinformation.

The creation of such a platform is great news, according to Hanley, who said censorship on mainstream platforms could lead to a shift that would see problematic users move to sites such as Parler, where the disinformation would be contained within an echo-chamber instead of spreading to those still unaware of the group's various conspiracies.

While taking down accounts on mainstream social media platforms may help to mitigate the spread of QAnon theories, repairing the damage that has already been caused is set to be a massive undertaking.

"It's impossible to get them to unbelieve it, because once that idea is embedded, it becomes part of their cognitive bias spectrum," Hanley said, comparing QAnon believers to cult victims.

Blazakis, meanwhile, warned that any government effort to mitigate QAnon risked furthering the effectiveness of the movement.

Those who follow the theory feel empowered by having some secret knowledge that others are not aware of, Blazakis said, so if the government were to try and refute the theories "they're going to say 'look, we're right. The government is trying to counter us'".

Instead, he said the most that can be done by civil society is to continue to point out failed conspiracy theories, for example, following the pandemic, pointing out that protective masks did not prove to be a stepping-stone to Sharia law.

"Hopefully over time, those who are adherents will just see that, time and again, these conspiracies are not happening, these theories are wrong, and then they'll just eventually get tired of feeling like they're always wrong and then disaffiliate from the QAnon movement. Over time people do walk away from cults," Blazakis said. "And that's what QAnon is, it's a cult." 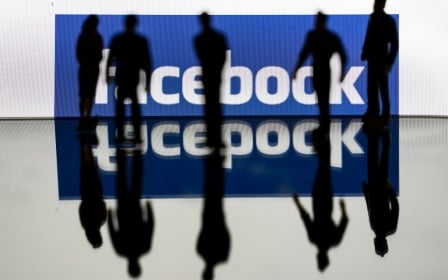