As Houthi rebels seize key northern port city, supporters of independence for the South gather for marathon rally in Aden 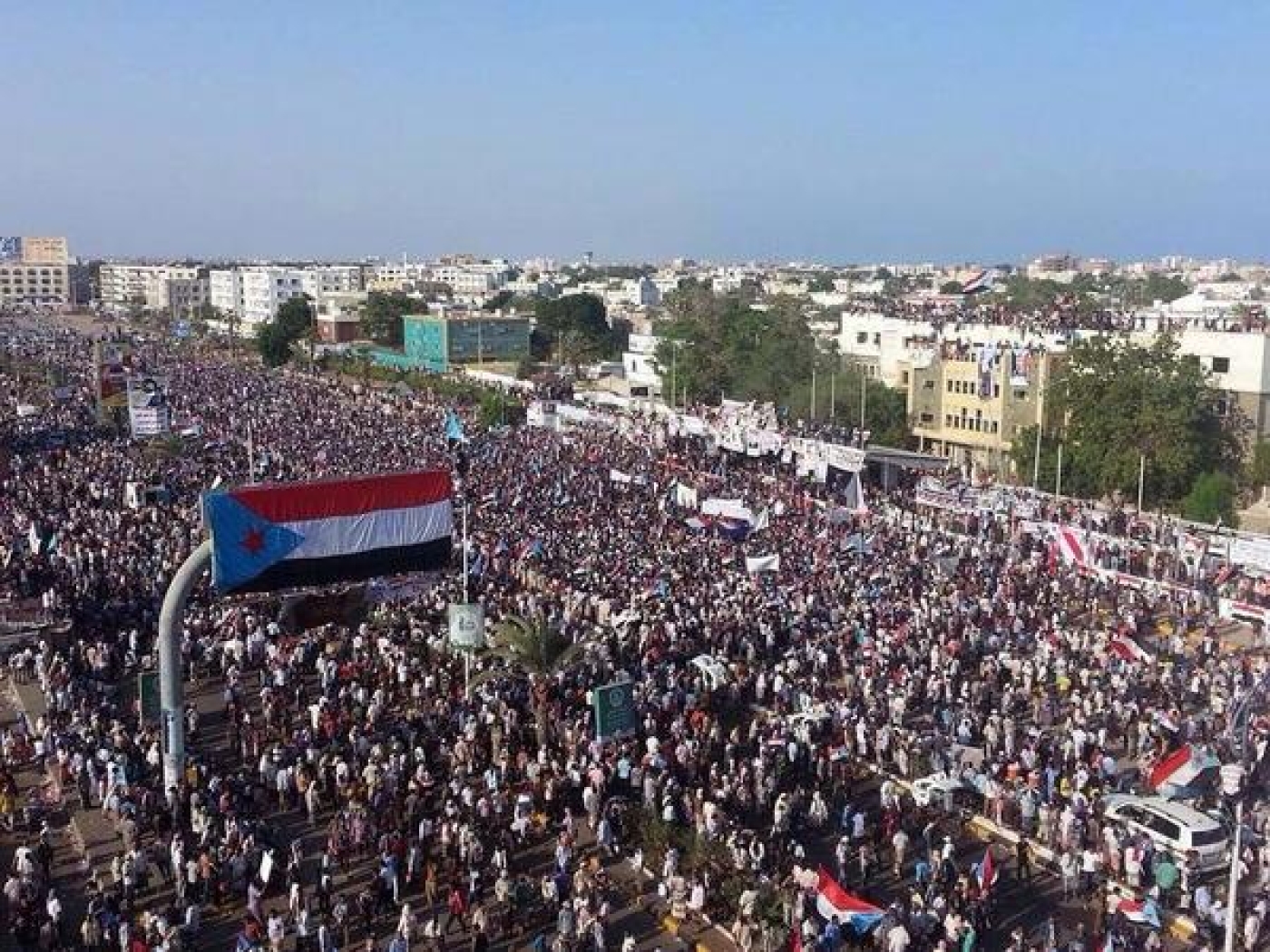 Yemen’s southern secessionist movement is staging a mass three-day rally in the key port city of Aden to demand independence from the North.

Protesters gathered in the city’s central Khormakser Square to mark the 51st anniversary of the former state of South Yemen’s uprising against British occupation in 1963.

Demonstrators shouted slogans like “No to occupation” and “Who owns this land? The people of the South!”, toting hundreds of flags symbolising the former state of South Yemen.

Some protesters set fire to posters bearing the images of key political and military figures like former President Ali Abdullah Saleh, Houthi leader Abdelmalek al-Houthi and Hamid al-Ahmar, a businessman and member of the Islah party.

A local security official told the Yemen Times that they numbered in the hundreds of thousands.

Saeed al-Batati, a Yemeni contributor, told MEE that crowds of such numbers would be highly significant for a province whose population numbers at most five million.

The sit-in, which is planned to last three days, began as Houthi rebels originating from their northern stronghold in Saada province advanced further southwards and took the strategic port city of Hodeida.

Last month, days after Houthi rebels consolidated their control over the north-western capital Sanaa, a group of retired army officers in the south declared the start of a military council that aims to follow the Houthi model and ultimately topple the government.

A Monday press statement issued by leaders of southern Yemen’s secessionist movement, al-Hirak, called for all southerners to flock to Aden, the former capital of South Yemen, for a “Million March of Divisiveness” on Tuesday.

They also called on oil and gas companies working in southern Yemen to stop exporting immediately, and resume work only after specialists appointed by the "Southern Revolutionary Committees" are in place to supervise the companies.

The protest was timed to coincide with the anniversary of the start of an armed struggle against British rule that began on 14 October 1963, and officially ended on 30 November 1967 with the Marxist National Liberation Front gaining control over the newly-formed state of South Yemen.

South Yemen united with the north of the country in 1990, but seceded four years later, resulting in Yemen’s 1994 Civil War and the ultimate defeat of South Yemen.

On the 51st anniversary of South Yemen’s anti-British uprising, the Aden Security Department established a special committee to anticipate the “chaos that might arise” during the protest.

Fears may have been heightened by a statement released on Monday by the Islah Party, Yemen's Muslim Brotherhood affiliate, in which it threw its weight behind the Southern secessionist protests for the first time.

In a ground-breaking statement, the party's Aden branch, which has never before expressed support for the independence movement, announced its respect for the will of southern Yemenis, and called all its supporters to take part in the rally.

In a sign that the tension was not limited to Aden, a large billboard publicising the outcomes of Yemen’s 2013 national dialogue was torn down in the central southern city of Mukalla.

Largest #NDCyemen outcomes billboard destroyed in Mukalla today #yemen NDC was the only legitimate refernce we had pic.twitter.com/vKnQC7mRzo

Demonstrators planted the South Yemen flag on top of the billboard, after tearing down the poster, which proclaimed that the dialogue talks were based on principles of democracy, fairness and “equal participation.”

Batati, who is based in the eastern town, told MEE that rallies in the city centre had attracted 2-3,000 people on Tuesday.

The day of protest in the south comes as northern Houthi rebels, who took control of Yemen’s capital Sanaa in September, advanced further southwards and seized the Red Sea city of Hodeida.

They managed to take the city, home to Yemen’s second-most important sea port, just hours after President Mansour Hadi announced a new Prime Minister in a bid to end the upheaval that has been crippling the impoverished country for months.

Southern secessionists say that the continued turbulence has driven them to renewed action.

Khaled Bamadhaf, a leader with Hirak, told local newspaper Yemen Times that southerners “can no longer stand the situation in the north.”

Inside Yemen
Houthis crack down on Sanaa coffee shops open to men and women
Inside Yemen
Meet the Yemeni man who raised $200,000 for charity through social media
Inside Yemen
'If Houthi shelling does not kill us, the diseases will': Yemenis in besieged Taiz bemoan neglect