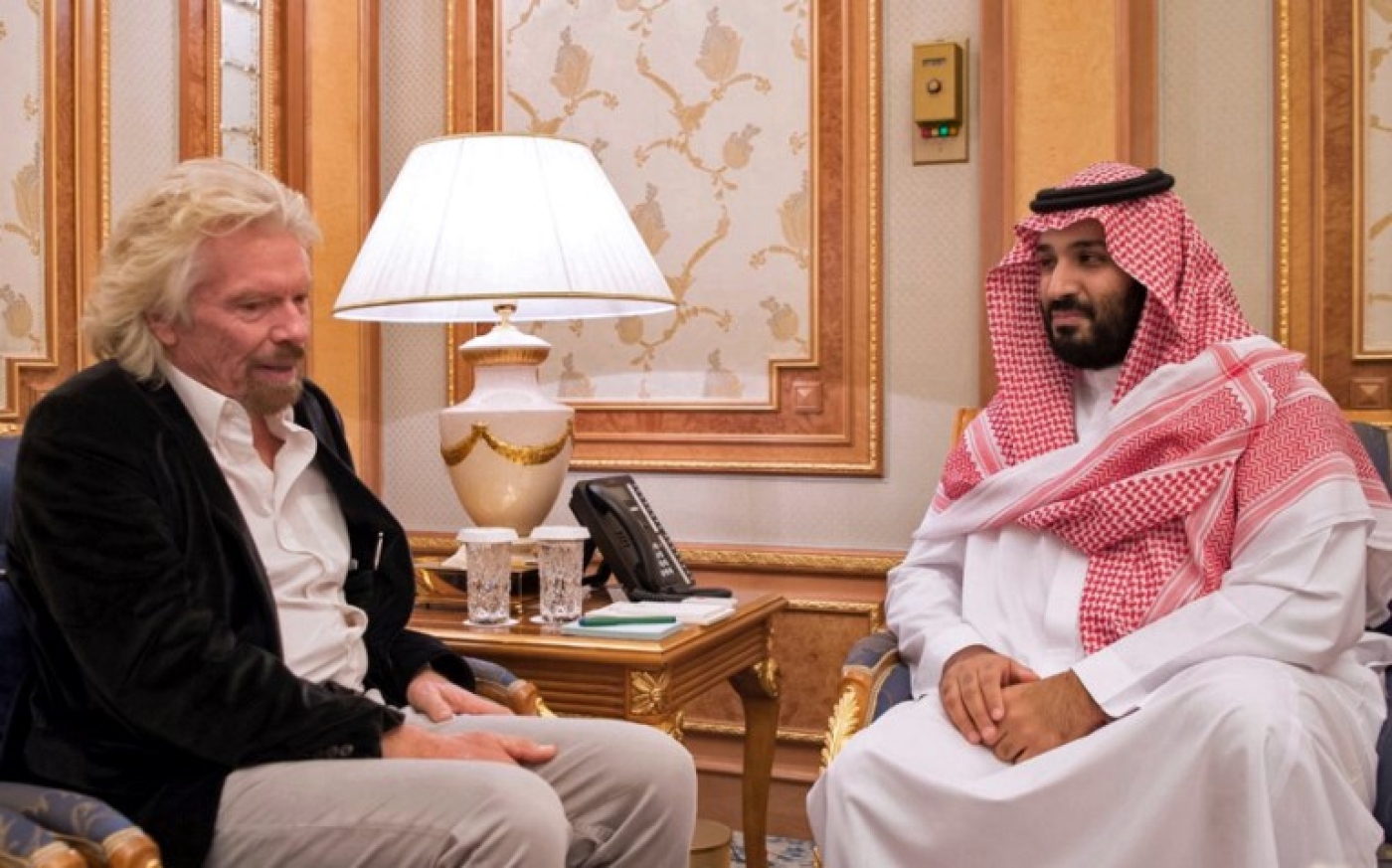 Media companies including the New York Times and CNN are pulling out of a Saudi investment conference because of growing outrage over the disappearance of a prominent Saudi journalist in Turkey.

British billionaire Richard Branson has also announced that his Virgin Group would suspend its discussions with Saudi Arabia's Public Investment Fund over a planned $1bn investment in the group's space ventures in light of events involving Jamal Khashoggi.

What has reportedly happened in Turkey around the disappearance of journalist Jamal Khashoggi, if proved true, would clearly change the ability of any of us in the West to do business with the Saudi government

"What has reportedly happened in Turkey around the disappearance of journalist Jamal Khashoggi, if proved true, would clearly change the ability of any of us in the West to do business with the Saudi government," Branson said in a statement on Thursday evening.

The veteran Saudi journalist, 59, has been missing since last Tuesday when he entered the Saudi consulate in Istanbul to obtain paperwork so he could remarry, and has not been seen since.

Turkish officials have told Middle East Eye that they know when and where in the building the veteran Saudi journalist was killed and are considering whether to dig up the consul-general's garden to see whether his remains are buried there.

Saudi officials have strongly denied any involvement in his disappearance and say that he left the consulate soon after arriving. However, they have not presented any evidence to corroborate their claim and say that video cameras at the consolate were not recording at the time.

As leaks have emerged, focus has turned to the kingdom's high-profile Future Investment Initiative conference, scheduled to be held in Riyadh later this month, with a handful of participants pulling out of the event over the past 24 hours.

Among those who have said they will no longer participate are Economist editor-In-chief Zanny Minton Beddoes and Andrew Ross Sorkin, a CNBC anchor and New York Times business journalist.

I’m terribly distressed by the disappearance of journalist Jamal Khashoggi and reports of his murder. I will no longer be participating in the Future Investment Initiative in Riyadh.

The New York Times, CNN, Financial Times, CNBC and Bloomberg have pulled out of the event. Fox Business Network is still slated to appear at the event, according to the event website.

Uber Technologies Inc chief executive officer Dara Khosrowshahi said in a statement he won't attend the FII conference in Riyadh unless substantially different set of facts emerge. Arianna Huffington, who sits on Uber's board, has also reportedly said she will no longer attend.

Viacom Inc CEO Bob Bakish, who was slated to speak at the conference, has decided to not attend the event, company spokesman Justin Dini said.

The FT reported that Jim Yong Kim, president of the World Bank, has pulled out of attending the conference.

'Davos in the desert'

The disappearance of Khashoggi, a US resident who wrote columns for the Washington Post, has cast a shadow over the three-day conference known as "Davos in the desert". The Post is owned by Amazon.com Inc founder and chief executive Jeff Bezos.

Last year's conference was held in part at the Ritz Carlton, which would serve just weeks later as a makeshift prison for hundreds of Saudi businessmen and figures accused of corruption by the state.

This year's event has attracted some of the world's business elite including Wall Street's top bosses and executives from multinational media, tech and financial services companies.

JPMorgan Chase & Co CEO Jamie Dimon is scheduled to speak, as is Mastercard Inc CEO Ajay Banga. Representatives for both companies did not respond to requests for comment.

Another billionaire, Steve Case, one of the founders of AOL, also decided to distance himself from Saudi Arabia, saying he would no longer attend the event.

"In light of recent events, I have decided to put my plans on hold, pending further information regarding Jamal Khashoggi."

Despite the growing outcry about Khashoggi's purported murder, US Treasury Secretary Steven Mnuchin confirmed on Friday that he will attend the Saudi investment summit.

"If more information comes out and changes, we could look at that, but I am planning on going," Mnuchin told CNBC.

Asked about his advice to business executives who may be reluctant about going to the conference, Mnuchin said: "My comment is: We all want the information, so let's wait and see what information comes out next week."

US President Donald Trump was asked on Friday if he believed it was appropriate for Mnuchin to attend the event.

Khashoggi's disappearance has led officials and business leaders to drop out of another one of Saudi Crown Prince Mohammed Bin Salman's - commonly referred to as MBS - large projects.

Unfortunately, as a PR thing, it’s going to be an incredibly bad smell that surrounds the government and their tactics to silence the press potentially

On Wednesday, former US energy secretary Ernest Moniz said that he had suspended his role on the board of Saudi Arabia's planned mega business zone NEOM until more is known about what happened.

"The recent trend in many countries of targeting journalists for doing their jobs is a fundamental threat to freedom of the press, human rights and the rule of law," Moniz said in a statement.

Moniz was named on Tuesday as one of 18 people advising the $500bn NEOM project. Last week, MBS said the project would build two to three towns each year starting in 2020 and be completed by 2025.

According to the Wall Street Journal, two other board members - Sam Altman of Y Combinator and Nellie Kroes, former European Commission vice president - have suspended their involvement.

The Harbour Group, a Washington firm that has been advising Saudi Arabia since April 2017, ended its $80,000 a month contract on Thursday.

"We have terminated the relationship," managing director Richard Mintz said.

'Massive waste of time and money'

It was just six months ago that images of MBS were plastered across the streets of London as he embarked on the first leg of a road show to the UK and the US that was meant to show he was “opening Saudi Arabia to the world”, as one of the signs said.

British PR agent Mark Borkowski told MEE he found the contrast between the campaign and the reports coming out this week about Khashoggi "incredibly peculiar".

It was "something of a massive waste of time and money putting together such a lavish exercise in this charm offensive", he said.

“Unfortunately, as a PR thing, it’s going to be an incredibly bad smell that surrounds the government and their tactics to silence the press potentially.”

As the PR fallout has gathered momentum, human rights advocates and others, however, have questioned why that the kingdom's three-year-long offensive in Yemen and arrests over the past year of activists, business people and religious scholars hasn't elicited similar high-profile outrage.

MBS publicity tour was a farce from the start, whitewashing his disastrous foreign policy and domestic repression. Didn’t need this atrocity to see that. https://t.co/7MXOLxgb0e

Adam Coogle, Middle East researcher at Human Rights Watch (HRW), said he had a feeling the day Khashoggi disappeared that it would be a big story. "But this has blown up beyond that," he told MEE.

"Jamal had friends - a lot of people knew him and a lot of people liked him, especially in the media. One of the crucial things was he was a Washington Post columnist. I think that really played at least some role in blowing this up."

But Coogle is unsure whether the fallout will be sustained. He said HRW has tried to reach out to major car companies who had hailed the announcement in June that Saudi women would be allowed to drive, and asked them to tell the Saudi government to stop arresting female activists who had campaigned for that right.

"The responses we got were incredibly limited," he said. "The companies hide behind, 'We don't deal with political issues'."