Following his release, Salah Hamouri speaks with MEE about his situation and Palestinians' broader struggle for freedom 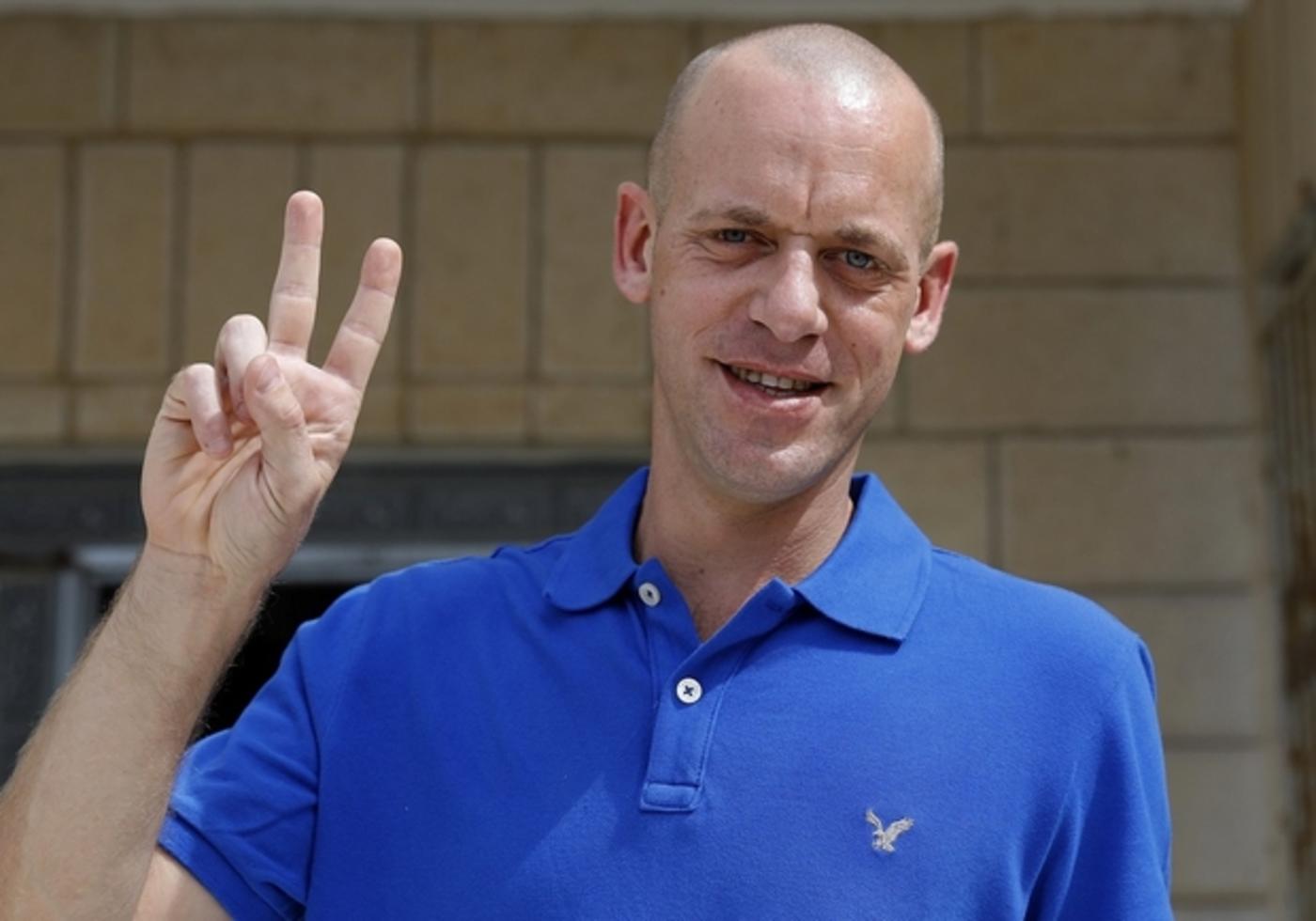 Salah Hamouri upon his return in his home town of al-Ram, near Jerusalem, after having been released from Israeli prison in September (AFP)
By
Élodie Farge

For more than four hundred days, Salah Hamouri languished in prison, deprived of his freedom and family, and uncertain when he would ever be let out.

On 30 September, the Franco-Palestinian lawyer was released from Israeli custody after spending 13 months in administrative detention - an Israeli policy largely used against Palestinians to hold them without charges or trial for periods of up to six months, renewable indefinitely.

Hamouri had already been imprisoned by Israel between 2005 and 2011 after being accused of being involved in a Popular Front for the Liberation of Palestine-led (PFLP) assassination plot targeting right-wing Rabbi Ovadia Yousef - accusations the young man, the son of a Palestinian father from Jerusalem and a French mother, has repeatedly rejected.

In total, more than eight years of 33-year-old Hamouri's life have gone up in smoke.

Hamouri’s wife, Elsa Lefort - who herself was banned from entering Israel and the occupied Palestinian territories in 2016 when she was six months pregnant - slammed Israel’s “relentlessness” vis-a-vis her husband in an interview with Middle East Eye in August (available only in French).

Hamouri’s case has led to intense mobilisation by pro-Palestine activists in France, who have called on the French government to intercede on his behalf.

Speaking with MEE after his release, Hamouri discussed his detention, the weakness of French diplomacy vis-a-vis Israel, and his determination to remain in Palestine despite Israeli pressure.

Middle East Eye: How were you treated during your imprisonment?

Salah Hamouri: You must know that prison is where the Israelis try to keep us away from our society and family. Detention conditions are the same for all prisoners, and I have not been subjected to any specific treatment because I am French.

Imprisonment in Israel is difficult, especially the collective isolation we experience in prison. Personally, I lived under the same conditions as the other detainees, except that I was not allowed to receive visits from my wife and son because they are prohibited from entering Palestine. It was an additional means of pressure on me.

Are you subjected to any restrictions, or are you totally 'free'?

The day I left prison, [Israeli] intelligence picked me up outside the prison gate and took me to the Moskobieh interrogation centre in Jerusalem. There, I was told that I was not allowed to organise a party to celebrate my release nor to participate in political activities for a month. I also paid a fine of 3,000 shekels [$809] and a bond of 20,000 shekels [$5,393].

I think that for Palestinians, freedom after leaving prison is not complete because Israel keeps us all in a large prison.

How do you feel about your detention today, knowing that no charges have been brought against you?

Prison is already a difficult place for any human being, but it was particularly difficult because Israel also chose to arrest me just at the end of my legal training, only a few days before a trip planned to visit my family in France. Israel targeted me during this particular period of my life to remind me that they are watching me closely.

'For Palestinians, freedom after leaving prison is not complete because Israel keeps us all in a large prison'

There were no charges. For 13 months, I was detained without being accused of anything. My file is kept secret. Neither my lawyers nor I have access to it, only Israeli intelligence services can. I think that this file is clearly empty, but that administrative detention is a means of pressure to force me to leave Palestine.

Translation: Today, Salah Hamouri was able to finalise his registration to the Ramallah bar by taking an oath - after passing the bar three days before his arrest. We send him our most sincere congratulations and wish him success in his career in the service of law and justice!

Do you embody something that Israeli authorities are afraid of?

I think the Israeli occupation harasses the entire Palestinian people, not just me. I am a part of this people, so I am suffering from Israeli persecution. It is true that I feel a particular pressure from Israeli authorities to force me to leave Palestine. I don't know if I'm considered a symbol or not, but I think that their objective is really to drive me into exile, by using my family to pressure me.

Do you think that the French diplomacy contributed to your liberation?

I think that French diplomacy has not done enough. From the moment when it became clear there were no charges against me, France should have banged its fist on the negotiating table.

'I don't know if I'm considered a symbol or not, but I think that their objective is really to drive me into exile, by using my family to pressure me'

France can be a respected power if it gives itself the means to become one. In my opinion, France was too slow to react as far as I am concerned. The efforts and the work finally undertaken should have been done, and vigorously, from the first day of my detention.

Do you hope that the ban on your wife, Elsa Lefort, will soon be lifted so she can join you in Jerusalem?

If, as it tells us, French diplomacy is convinced that this ban is arbitrary and unfair, then it must do everything to ensure that me and Elsa can be reunited in Jerusalem. This is where we want to live and it is our right. French authorities must have the courage to defend the rights of all French citizens.

You have stated that despite the pressures, including forced separation from your wife and son, your choice to remain in Palestine was "irreversible". What motivates you?

I am driven by the force of my convictions. We cannot give up, we cannot comply when the occupation asks us to leave - no, on the contrary, we must stay in Palestine. If every Palestinian who has experienced pressure from the occupier had chosen exile, then there would not be many Palestinians left in Palestine.

Aren't you afraid of being imprisoned again?

The thought of being arrested again has never left me since I was released from prison in 2011. We know that we face this risk in our everyday life in Palestine. The Israeli occupation uses prison to try to put an end to our political mobilisation, so when we are politically engaged, we know the price we have to pay to advance our cause.

Are the Palestinians you have met in prison keeping their morale up? Could we see a new collective hunger strike, or is there some disillusionment towards any form of protest from inside the prisons?

Palestinian political prisoners are in good spirits and have hope for their struggle. When we are incarcerated in the jails of the occupier, we have no choice but to stand up and fight the occupation, keeping in mind that despite our suffering, we are moving towards freedom.

The situation inside prisons is influenced by the political situation outside. For prisoners to engage in a collective hunger strike, they need to be accompanied by a favourable political context, otherwise their mobilisation may be in vain.

What are your projects now?

My priority is to reunite with my wife and son and obtain their right to return to Jerusalem so that we can live together. I also want to continue my legal studies in parallel with my work as a lawyer.