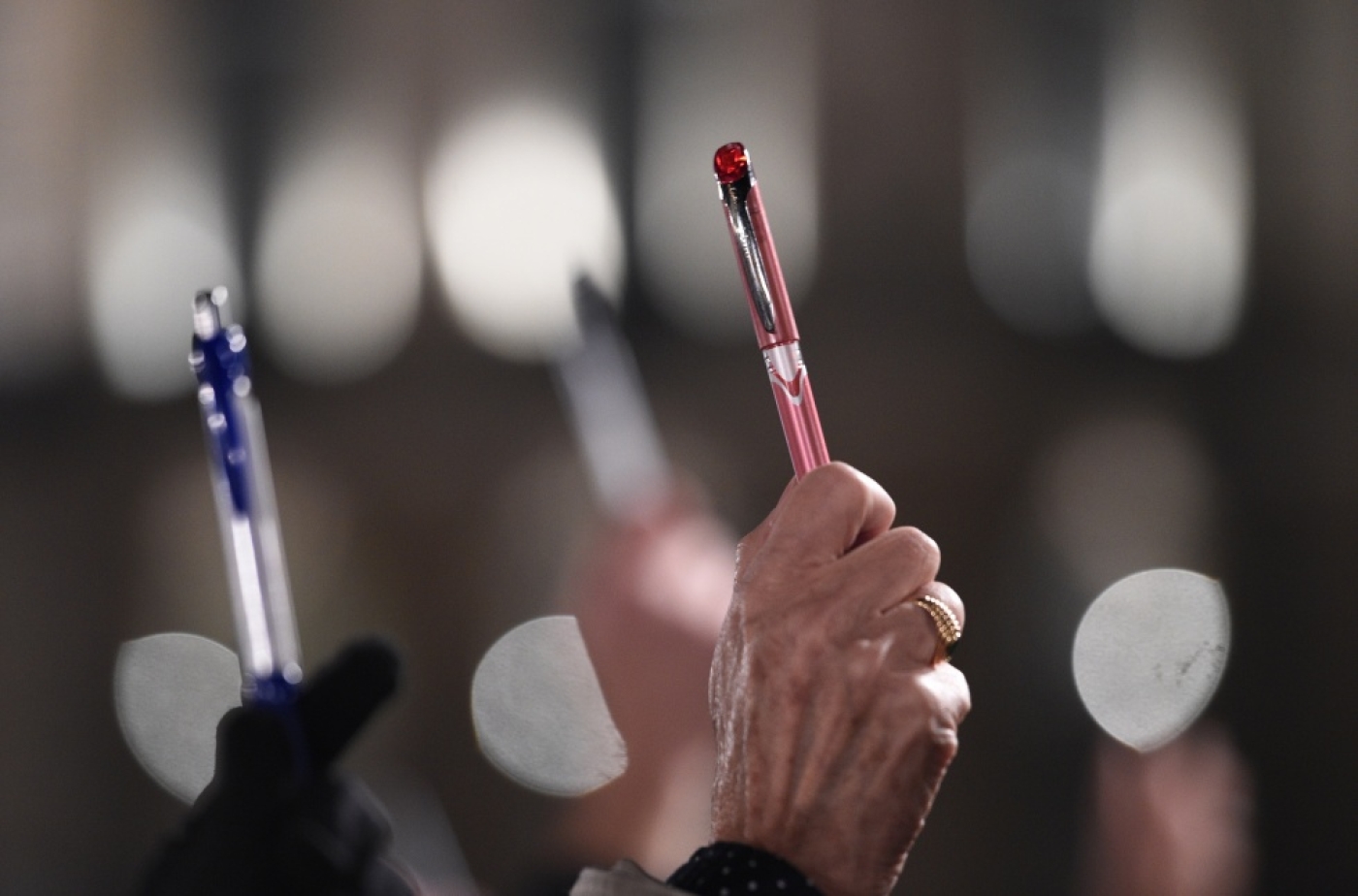 People hold up pens during a gathering in front of the city hall of Rennes, western France, to express with Charlie Hebdo magazine, on 7 January, 2015, (AFP)
By
MEE and agencies

A number of sates and institutions across the Middle East condemned a deadly attack Wednesday on a Paris satirical magazine that killed at least 12 people.

The Arab League and Al-Azhar, Sunni Islam's most prestigious centre of learning, both condemned the attack.

In a separate statement to AFP, Al-Azhar senior official Abbas Shoman said the institution "does not approve of using violence even if it was in response to an offence committed against sacred Muslim sentiments".

"We offer our condolences to France, our friend and ally on this day of sadness," said President Recep Tayyip Erdogan, adding that he hoped the gunmen behind the attack would be brought to justice "as soon as possible".

In a statement, he urged the world to "stand up against terrorist acts like the one committed in France, against tensions caused by intolerance towards diversity".

Erdogan stressed that "terrorism has no religion or nationality and no excuse can be given for it."

The Turkish leader regularly denounces what he sees as the rise of Islamophobia in European countries, calling the trend "a serious threat" as recently as Tuesday.

Prime Minister Ahmet Davutoglu said there was no link between Islam and violence as he condemned the "terrorist attack" on Charlie Hebdo magazine.

"This terror attack cannot be linked with Islam. Any connection established between Islam and these activities is wrong," Davutoglu said.

"We must fight against increasing racism, xenophobia and Islamophobia in Europe which threaten all our values. We must also fight against any form of terrorism," Cavusoglu told reporters in Ankara.

The minister said: "It is not a correct approach to associate Islam with terrorism."

"Such acts that target unarmed civilians contradict all principles and moral and human values," the foreign ministry said in a statement.

Doha offered condolences to the French government and the families of the victims.

The International Union of Muslim Scholars, led by Doha-based cleric Yusuf al-Qaradawi, also condemned the "sinful" attack, "regardless of who are the culprits and who is behind them."

It urged "French authorities and people to unite against extremism regardless of its religion or belief".

"Those who are committing such crimes aim to sow sedition," the union said.

The Egyptian leader expressed his condolences to his French counterpart Francois Hollande, the families of the victims and the wounded, his office said in a statement.

Sisi, in a telegram sent to Hollande, "expressed the Egyptian people and government's condemnation over the terrorist act that the French capital Paris witnessed today," the statement said.

Offering his condolences to the victims' families and the wounded, Sisi said "terrorism is an international phenomenon that should be faced and terminated through joint international efforts".

Israeli Prime Minister Benjamin Netanyahu called for global unity to fight the "scourge" of "radical Islam", after the attack in Paris.

Speaking at a crisis centre in Jerusalem set up to deal with severe winter storms battering the Middle East, he expressed Israel's condolences for the "brutal act in the heart of Paris today."

"The attacks of radical Islam know no boundaries... and the response has to be international," he said.

"The terrorists want to destroy our freedoms and our civilisation and, therefore, all... the civilised societies have to band together to fight this scourge.

"If we stand together, we can defeat this tyranny."

Iran condemned the killing of 12 people in Paris but reiterated its criticism of the weekly's 2006 publication of cartoons of the Muslim prophet Mohammed.

"All acts of terrorism against innocent people are alien to the doctrine and teachings of Islam," foreign ministry spokeswoman Marzieh Afkham told the official IRNA news agency.

She said suck attacks were part of a "wave of radicalism" that had spread around the world over the past decade, fanned in part by "poor policies and double standards in tackling violence and extremism."

But she renewed Iranian criticism of the magazine's decision to reprint 12 cartoons of Mohammed published by the Danish newspaper Jyllands-Posten in a statement for freedom of expression.

"Making use of freedom of expression... to humiliate the monotheistic religions and their values and symbols is unacceptable," Afkham said.

Iran's former supreme leader, Ayatollah Khomeini, issued a fatwa in 1989 against Salman Rushdie, a British author of Indian origin, for his book The Satanic Verses, saying it was against Islam, the Prophet and the Qur'an.

He called on Muslims to murder the award-winning author and anyone involved in the publication of his work.

A decade later, Iran's foreign minister said his country no longer threatened Rushdie's life or encouraged others to kill him.

Meanwhile, Rushdie himself paid tribute to the work of Charlie Hebdo.

"I stand with Charlie Hebdo, as we all must, to defend the art of satire, which has always been a force for liberty and against tyranny, dishonesty and stupidity," he said.

"'Respect for religion' has become a code phrase meaning 'fear of religion'. Religions, like all other ideas, deserve criticism, satire, and, yes, our fearless disrespect."

"This religious totalitarianism has caused a deadly mutation in the heart of Islam and we see the tragic consequences in Paris today."

The killing of 12 people on Wednesday is incompatible with the Muslim religion, said Saudi Arabia, the home of Islam's holiest sites.

"The Kingdom of Saudi Arabia has followed with deep sorrow the terrorist attack" at the Charlie Hebdo magazine, the state Saudi Press Agency said, citing an unnamed official source.

It said the source condemned "this cowardly terrorist attack which is incompatible with Islam".

"This terrorist attack (is) condemned by Iraq, which has suffered greatly at the hands of terrorist groups," Abadi said in a statement.

"This confirms that terrorism threatens all the countries of the world, and not Iraq alone," he said, calling for "concerted efforts of the international community in fighting it."

France has been taking part in US-led air strikes in Iraq against the Islamic State (IS) militants group, which has seized swathes of the country and neighbouring Syria. 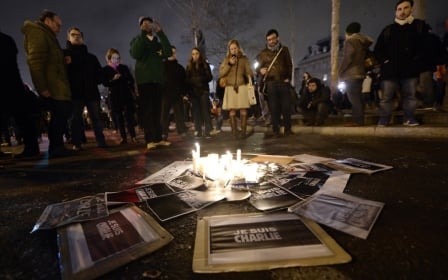 Charlie Hebdo
IN PICTURES: Protests in condemnation of Paris shooting