More than 60 children born to British Islamic State members are stranded in northern Syria, double the initial estimate, according to Save the Children.

The charity said that many of the stranded British children are under the age of five and suffering from dire conditions in makeshift refugee camps.

While older children had exhibited signs of trauma after witnessing violence episodes, including beheadings, at the hands of IS, according to the child-rights charity.

Save the Children added that its staff spoke to a British mother of two who was trapped inside a camp in northern Syria after fleeing from the former IS stronghold of Baghouz. The mother said she knew of 15 other British children and expressed concerns over her own children's safety in Syria. She also said she is prepared to face an investigation if allowed back into Britain

Alison Griffin, a spokesperson for Save the Children, said the children are innocent and called on Britain to return as many British children as possible from the war-torn area.

"Children in Syria who have fled ISIS-held areas are innocent. Their short lives have been full of violence and fear but with the right care they can bounce back, recover and amaze us," Griffin said in a statement.

"They deserve that chance, no matter what they’ve been dragged into by the decisions of adults. For the British children among them we can and must give them the safety they need by bringing them to be cared for in the UK.”

Tensions mounted over the safety and whereabouts of children from IS members detained in Kurdish-run detention camps after Turkey launched an incursion into northern Syria earlier this month.

But after Ankara announced a five-day ceasefire last Wednesday, charities told Middle East Eye it hoped UK officials would take advantage of the lull in fighting and use it to evacuate its nationals.

On Sunday, UK officials told the Guardian that the government was investigating potential avenues to take back children born to IS members in northern Syria.

Unlike other European countries, Britain has been hesitant in saying whether they will seek to return children born of UK nationals in Syria.

But UK officials have admitted that they have taken back a "small number" of children born to IS members over the last 12 months.

Belgium and other European states meanwhile said they were preparing to evacuate citizens accused of having links to IS. 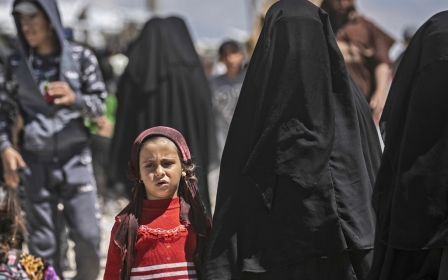