Aziz Akhannouch, head of Morocco's National Rally of Independents (RNI), reacts during a press conference in the capital Rabat after his party came in first in parliamentary and local elections on 9 September 2021 (AFP)
By
MEE and agencies

Akhannouch, a former agriculture minister, is one of Morocco's richest men with a fortune estimated at about $2bn. He has led the liberal National Rally of Independents (RNI) party since 2016.

RNI won 102 of the parliament's 395 seats, trouncing the moderate Islamist Justice and Development Party (PJD), which has had headed the governing coalition for a decade but took just 13 seats in this election, according to results released by the interior ministry.

Akhannouch hailed the results as "a victory for democracy”. Following Wednesday’s polls, the king appointed Akhannouch "head of the government and tasked him with forming a new government", a statement from the palace said.

Under reforms introduced in 2011, the king picks the prime minister from the largest party in parliament but retains veto power over cabinet members.

In recent years he has taken back more powers within the palace walls, analysts say.

RNI is considered close to the palace and has been part of all coalition governments for the past 23 years, except for a brief period between 2012 and 2013.

In a speech after the election results were declared, the newly appointed prime minister said that he would "implement his majesty's vision”.

Although Akhannouch has pushed RNI as a champion of social and economic reforms in this election, his holding company operates in the fuel and gas distribution business and was targeted by a consumer boycott campaign in 2018 over prices.

The party must now build a governing coalition that can command a parliamentary majority of at least 198 seats.

Following his win, Akhannouch pledged to improve conditions for citizens of Morocco, where entrenched social inequalities have been exacerbated by the pandemic.

"The main commitment of the party is to work seriously as long as we enjoy the confidence of citizens, to improve their daily lives, to achieve their aspirations and regain confidence in their representatives," he said.

The economy shrank by 7.1 percent in 2020 and the poverty rate shot up to 11.7 percent during the lockdown, the Moroccan statistics institute said in April.

Akhannouch said he was ready to begin negotiations to form his coalition government.

"The most important thing is to have a coherent and united majority," he said in a televised address on Friday evening.

Under Morocco's constitutional monarchy, the new administration must be submitted for approval by the king, who reserves veto rights.

Akhannouch will likely draw from the main opposition, the Authenticity and Modernity Party (PAM) -- founded by an influential royal advisor -- which came second in the parliamentary elections with 86 seats, as well as the conservative Istiqlal party, which took 81 seats. Cabinet horsetrading is not expected to include the PJD however, which announced that it would switch to its "natural" position as the opposition.

Swept to power in the wake of the 2011 uprisings around the Middle East and North Africa, the PJD had hoped to secure a third term leading a ruling coalition. Instead, it secured only 13 seats compared to 125 in 2016.

The PJD, whose leader Saad Dine El Otmani had been prime minister since 2017, has complained of violations in the election including what it said was vote-buying by rivals.

Despite the change of guard, policy shifts are unlikely since major decisions in Morocco are still made by King Mohammed VI.

A 'new model' of development

The head of the Arab world's longest-serving dynasty has already announced a charter for a "new model of development" with a "new generation of reforms and projects" in the coming years, with political parties expected to sign up.

In an effort to boost turnout, a recent overhaul of the election laws meant that Morocco's 18 million voters cast ballots in both parliamentary and local elections on the same day for the first time.

Around 50.35 percent of eligible voters participated, according to the interior minister, higher than the 43 percent in the 2016 legislative polls. 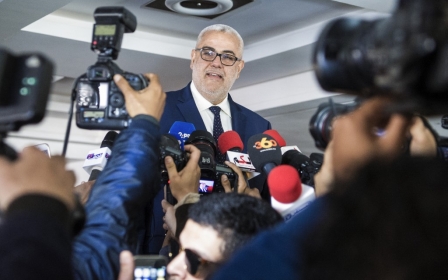